After Effects on Mac: Use touchpad to scroll like in PS or Illustrator

In Photoshop and Illustrator I can 2-finger scroll on the x and y axis. For zooming I can pinch-to-zoom which works seamlessly.

However, Adobe After Effects reacts totally different to this: Pinch-to-zoom results in zooming into the top left corner so the video output ends up "flying" out of the lower-right corner of the screen and two-finger-up-and-down-scroll zooms at the center of the video. two-finger-left-and-right-scroll, instead of moving along the x axis, has no effect whatsoever.

I could get used to that if I worked on a PC but why can't I make use of the wonderful touchpad on my mac? It works in other Adobe CC products that I own, so why is After Effects behaving so weird? It's not just that it behaves different, I see no reason why sidewards-moving is not working and why anyone would want to zoom into the upper left corner of their screen.

This is what happens when I pinch-to-zoom. The black rectangle in the lower right corner is the video and instead of zooming into the video, pinch-to-zoom leads to putting the video out of sight because it zooms into the top left. 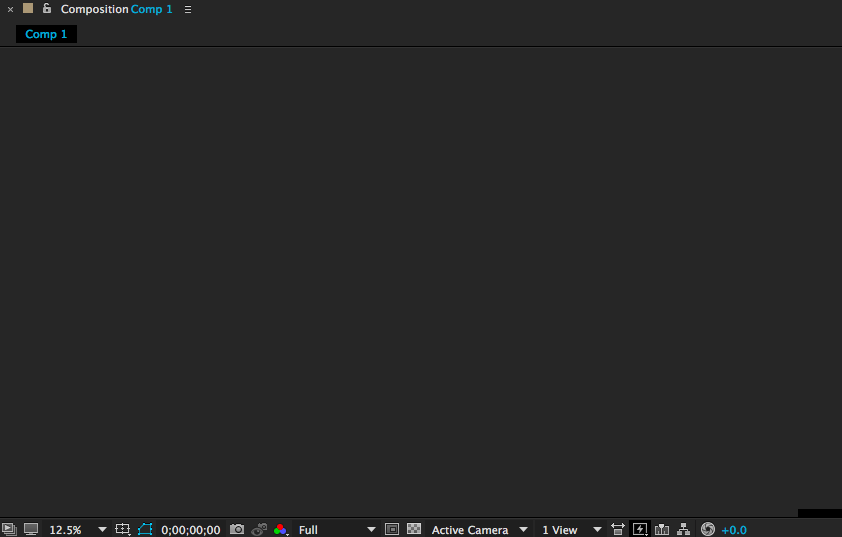 I hope I've written this post somewhat understandable, it's pretty hard to explain but here a little summary.

Maybe it's just some settings that I am unable to locate but I also googled for the issue and the only results are people asking about how to create zooming animations.

It's so weird the way all the Adobe apps require different muscle memory to do the same thing. Even things that are the same like panning around a work area or zooming. I understand it's because of the history of the apps, but Adobe's acquisition of AE was over two decades ago, they've had time to standardise it.

Until they fix this (and don't hold your breath) you'll have to learn the AE way of navigating your comp window: hold (don't tap) the spacebar and click-drag with the left-mouse-button / single-finger-trackpad to pan and scroll, scroll-wheel / two-finger-slide to zoom. It will zoom to the point that is in the centre of the comp window, unless you hold the alt key while you're zooming in which case it zooms to the cursor. If youy want to zoom right in to the frame level press ;, press it again to zoom out to the whole comp.

Also useful are the , and . keys which zoom in and out (it makes more sense if you think about the < and > symbols which also share those keys, but you don't hold shift) and ? which zooms to fill the comp window. You'll find that AE works best if you work two-handed. Dominant hand using the pointing device of your choice, the other working the keyboard. Efficiency in AE is all about keyboard shortcuts.

As far as I know, it sadly is not possible. Maybe through third-party plug-ins, but it behaves the same way on windows. Maybe if we bug the after effects twitter account long enough about it they will listen, but for now they have failed to answer my tweets, so I think it really is not possible at the time ...

1
3D composition shows up as 2D in main project view?
6
Object moving to a position I didn't specify
2
Adobe Premiere Pro / After Effects Hard Drive Scratch Disk and Cache set up in temporary situation.
0
Get location (X,Y) of motion tracking object?
0
After Effects - EG Template: Of 2 keyframes I only want to change the 2nd in EG, help!
0
Illustrator Import to After Effects
0
Simple Transition Effects for Short Video or GIF
2
Creating the Star Trek warp effect in After Effects