After Effects, text layers and depth of field

I have a hard time getting blurry text in the background with a camera and depth of field look "right".

Because I need to use latex math equations, I can't use built-in text, I need to either use AI files, PDF files or a hi-res version of the text exported in png from photoshop. The results are exactly the same though.

In the example here below, I used:

But the text layers seem very "pixelated" after I push them forward over 250 in the z axis. It doesn't seem natural at all passed the second layer. The plus sign is the most obvious in terms of degradation. The results seem more fuzzy than blurry. 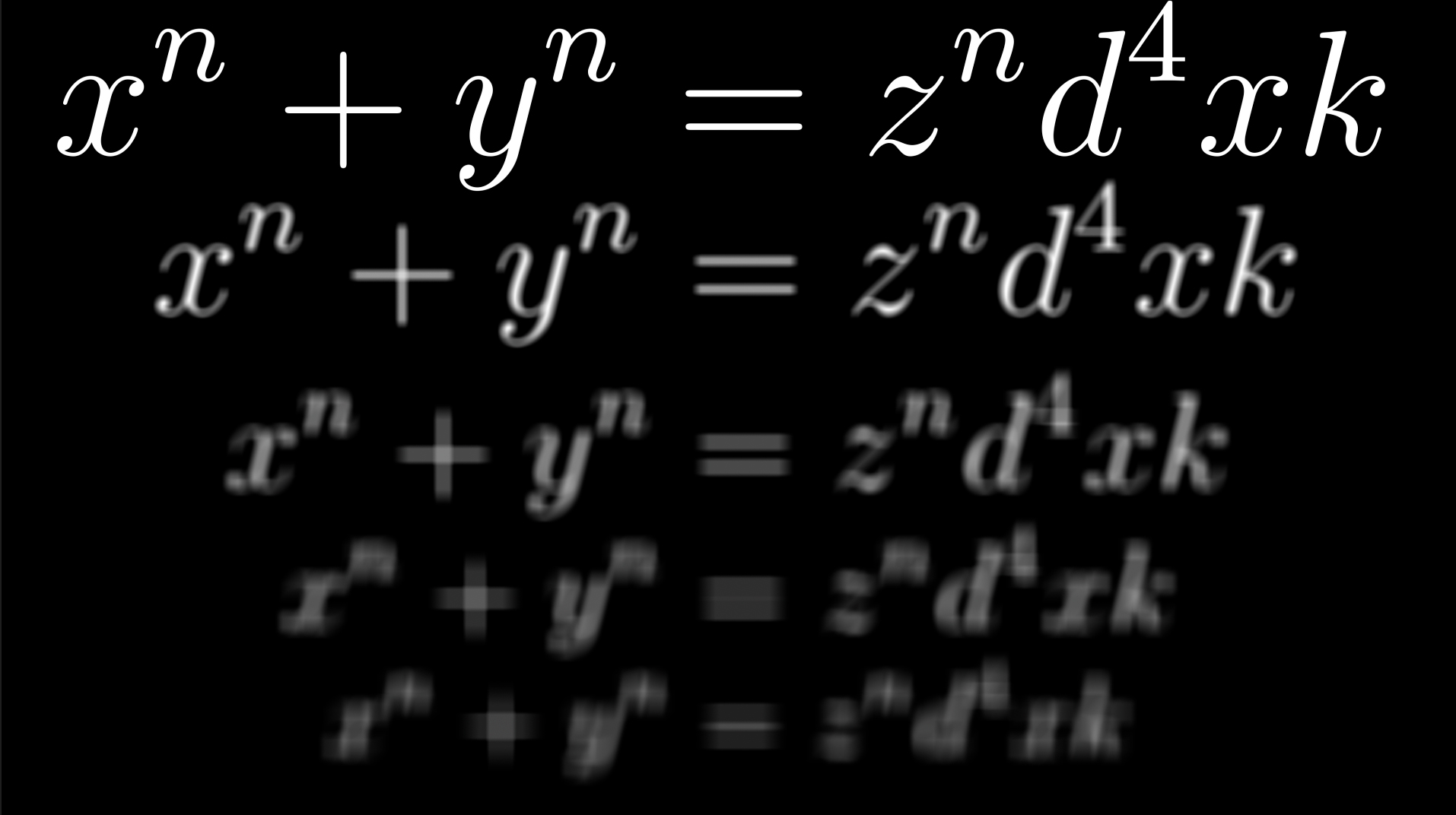 What am I doing wrong?

If nothing in particular and it is supposed to be that way, what can I do so that the blur/bokeh seems smooth at all distances?

As it is, it doesn't seem THAT bad because I gradually pushed those texts backward and the sense of depth of field is there alright. But if I have, let's say, both the first and last text alone, it doesn't look like one is behind the other, only that one is fuzzier than the other. That's a problem since I have to move the camera rather often in my animation. The sense of depth should be there all the time.

Any workaround that would enhance the result (more blurry, less fuzzy) would be welcome.

Here is an example of something that is approaching what I'm looking for:

The bokeh effect induced by the depth of field seems to smooth and "sphere" things out rather than "square" them.

Thank you for your help and input.

The default camera blur in after effects isn't very nice. You can adjust it a little by changing how the camera behaves in the Camera settings

A larger aperture value on the camera will give you more blur at closer positions. You could try making the aperture larger, and then change the amount of distance between the text layers (and compensating with the scale of each object to get the effect you want). 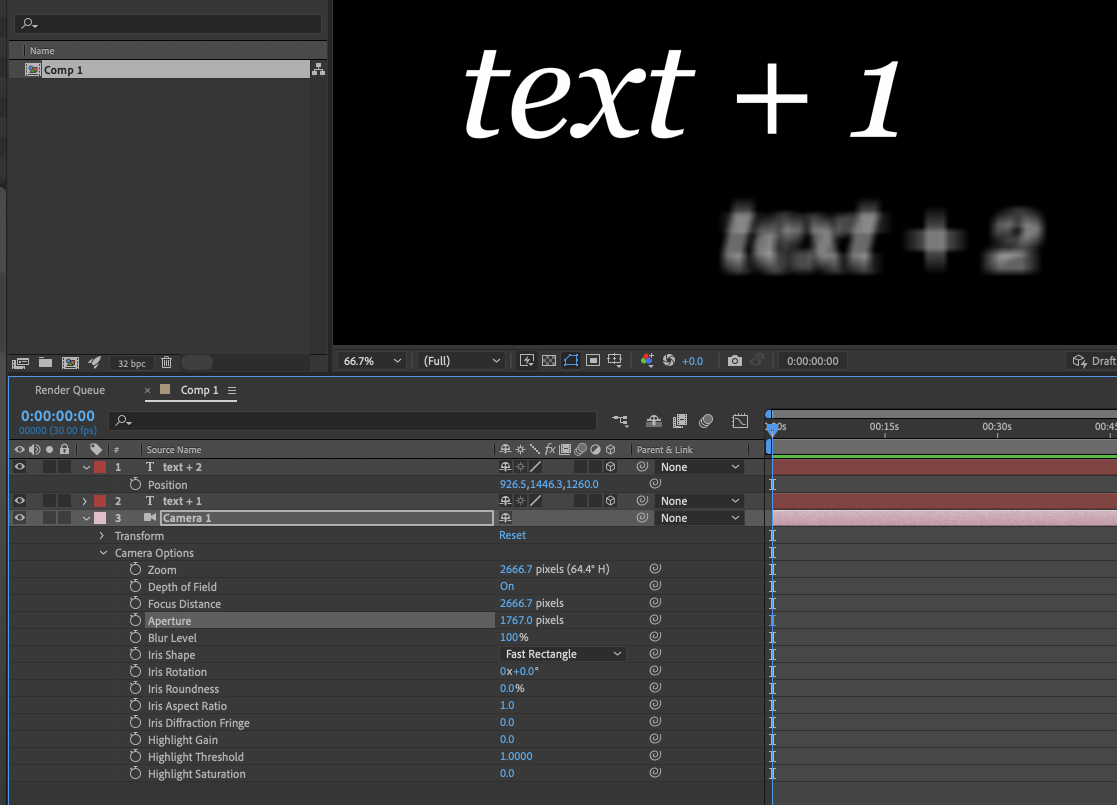 Alternatively, a much more involved process is to use the Camera Lens Blur, or a third party camera lens blur, and a depth map to get a more realistic depth of field blur. This looks much nicer, but takes much longer to render.

The depth map is a 2D greyscale version of your 3D image, where the shade of grey of each pixel represents how far the image is from the camera, so it allows a camera plugin to correctly calculate the blur for each point.

The default iris on the 3D camera in AE is set to fast rectangle. You'll get better bokeh if you change it to hexagon, or higher sided polygon. You can also adjust the iris roundness. Double tap a to show the camera settings. 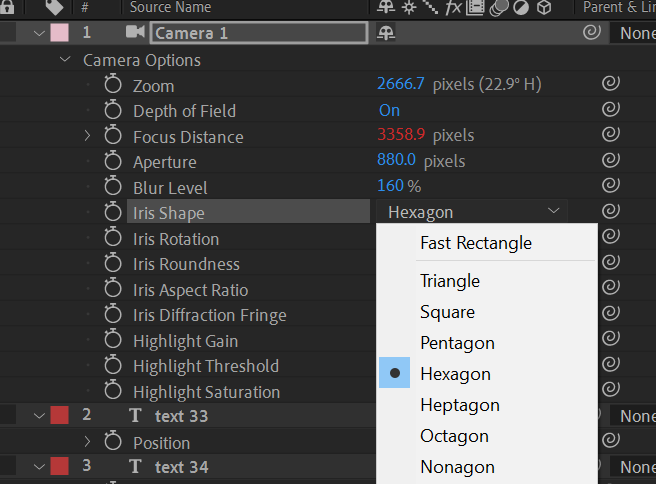 You could also add a lens blur effect to each layer and drive the blurriness via expressions. E.G.:

Not the answer you're looking for? Browse other questions tagged after-effects camera or ask your own question.

0
Correcting video flicker problem caused by camera's auto white balance
6
Does 4K impact quality when filming in low light? (other parameters being equal)
2
Imitate letters in text falling down as if under gravity AE
1
Adobe After Effects: Keying layers based on other layers
1
What equipment do I needed for filming dance instruction?
1
Different in and out animations for text in After Effects