Proper Microphone for Indoor Use & Filter out Ambient Noise

I'm working on creating some training videos that will cover a single presenter from the waist up, and I'm trying to avoid the microphone being visible while also getting good sound and avoiding ambient noise. If possible, I'd love the setup to be static so that it requires less repetitive setup (but that is a nice-to-have, not a requirement).

The setup for the shooting is a relatively small space (About 10 x 6), and the building is relatively close to an extremely busy street with fast/noisy traffic. As a result there is a lot of ambient noise from the traffic. I'd like to avoid as much post-production audio work as possible.

My question is: How do I go about selecting the proper microphone for this space?

I originally was thinking that a Shotgun mic would be appropriate since it picked up sound directionally, and that I could even potentially hang this microphone from the ceiling. However, the more reading I did indicated that the way shotgun mics work to reduce ambient noise is not effective indoors; and that specifically in my small room setup its not likely to have the desired effect.

I've been browsing microphones on Amazon, but I don't know where to even begin with selecting the appropriate microphone.

Are there certain microphone characteristics I can use to compare one microphone from the next to determine what is a good match? What other details do I need to know to make this selection?

I'm looking at spending up-to $200, but I don't want to spend money I don't need to if it won't make a significant difference.

I'm going to answer this broadly in theory and then get back to your question.

Shotgun mics are usually supercardoid or some variant. That means that although a majority of the pickup is in the front (say 70%), there is also some pickup in the back (30%); as well as some pickup on the sides. Outdoors this doesn't matter that much as the closest thing to the mic is usually the talent and sound isn't bouncing back into the microphone but rather drifting to it from other sources so the background rejection is better. Indoors, however, this 30% characteristic can be a major pain as your mic will pick up on the reverb of the room, the ambient noise, .etc.; this is why it is usually suggested to have the back of the mic pointed to the corner of the room so the audio waves from the source deflect a bit.

This means if the room isn't properly treated the mic has to be absurdly close to the source otherwise it WILL pick up at least some reverb. I personally never have time, or the budget, to properly treat a room with acoustic foam or blankets to help absorb the waves before they start bouncing into the mic.

Another characteristic of shotgun mics seen in the picture below is that they have incredibly narrow pickup patterns such that if the shotgun is off-axis from the source there will be a noticeable difference in sound. Some shotguns are advertised with off-axis rejection which means that this effect will be exacerbated, with the caveat of having more rejection of the 30% category. 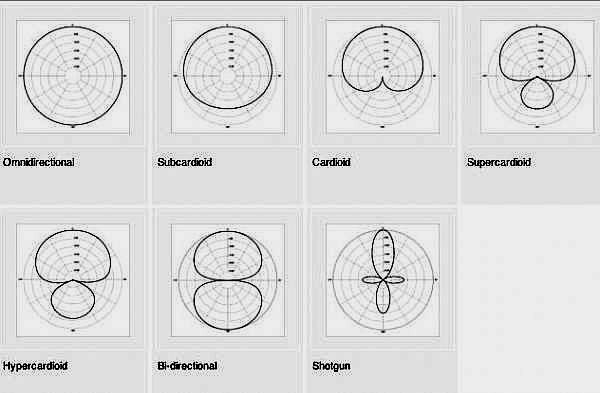 Looking at the above chart we can see that we have other options. Hypercardoid is even worse, with more background pickup. But there is a saving grace, a cardoid microphone. It has a relatively wide front pickup pattern and hardly any background pickup. An example of this, that I use on indoor shots is the Octava MK-012 with a cardoid capsule (this mic can also be used as an hypercardoid or an omni with different capsules). This mic is competitively priced at 179 and was recommended to me by an audio professional; apparently its been around for a while with good results in the field.

But if it were me... there is something about ease of use that makes me a happy filmmaker. When you are carrying everything yourself, it’s nice not to have to setup a boompole on a light-stand with sandbags and xlr wires and recorders....

So what I would do.. get a good lav system. It will be worth it in the end, and you'll use it more in the end. Although lavs are omni directional, they are incredibly incredibly close to the source. Say your source is speaking at a 10, the omni is right there picking up a 9.5, and all of the rest of the noise is far away at about a 1... you can barely here it. Conversely with a shotgun your source is at a 10, the shotgun is picking up a 7 and the background noise at a 3. You don't have to worry about talent moving too much with the audio being off-axis, and you don't have to set up so much.

You can hide the lav with a simple piece of medical tape or rode invislav. I use the Sennheiser AVX system and have been happy but its $$$. You could get the Rode link system but its a bit over your budget. To fit your budget I would do something like a zoom h1 with a rode lav or giant squid lav but it would require you to sync in post. Spend the extra money and get the rodelink :)

That being said you might not even need any of this, if you want to treat the room and you have a shotgun you can get good results. Just take it for a test run first.

My two suggestions are:

2
Minimising image noise within the recording of indoor office environments
3
Microphone suggestions or software to avoid background noise in audio
0
How to set up live audio feed (with lavalier mic)?
1
Microphone for indoor interview
1
Easiest workflow to get better audio when using a DSLR
1
What equipment do I needed for filming dance instruction?
0
Is there a microphone / video setup that requires little to no post-production?
1
Eliminate background noise in home made videos