After a clip ends should that track be re-used?

Say you have file100.mov run for 10 seconds on track A1 and V1. At the 11 second mark track A1/V1 is effectively empty. Is it better to "recycle" that track with file200.mov or to put file200.mov onto track A2 even though there is no overlap?

If its best to use the same track when not overlapped would it be beneficial to slice the below as soon as the cross dissolve ends on V3 and move the rest of MVI_6260.MOV to continue running on V2? 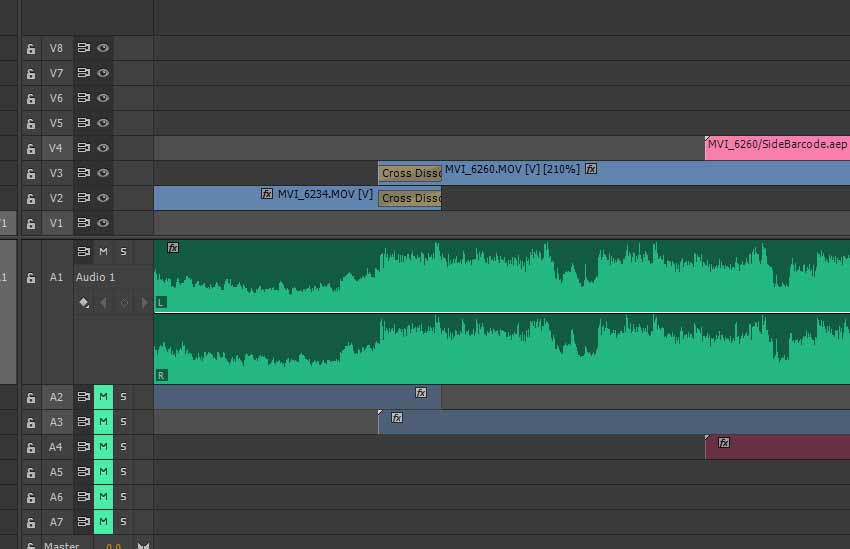 It depends on what technique you are using for editing and what purpose you assign to each track. In a non-linear editing (NLE) program like Premiere, it is extremely common for almost all editing to be done on a single video track with additional tracks only being used when something needs to be layered on over top of what is currently on Video 1. (Such as titles). When doing this type of editing, it doesn't matter where exactly you put the cut when you are doing transitions. The clip will keep playing as long as it is needed for the transition (unless it runs out of footage in the source file.) So in your example, if V2 and V3 were both on the same track, you would just need the one instance of Cross Dissolve and the clips on V2 and V3 would both be used for the duration of the dissolve effect.

In composition software like After Effects however, each video or asset is on it's own layer and has it's own track. The difference is that composition cares about the layers themselves and how they combine where as non-linear editing cares about what clip is currently being displayed and how you change between them.

It is also possible, particularly in large, multi-camera projects to synchronize the video clips from different sources on different tracks in an NLE and then choose which track you want to be active. This is known in some systems as A/B or multi-camera editing. Premiere does support mutli-camera editing and formerly had an optional A/B editing mode.

Not the answer you're looking for? Browse other questions tagged premiere tracks or ask your own question.

18
Adobe Premiere - Restore Audio to A/V Clip After Deleting
3
Track Object in Premiere Pro / After Effects
0
Adobe premiere cc 2017: Archive (clip) After rendering, gets too long, why?
1
replacing audio of a clip after editing on a timeline in Premier Pro CC 2017
2
Is clip or part of a clip used?
0
Revert “Add edit” of the track, after CMD+K in Adobe Premiere CC 2017
0
Change the speed of clip based on sound track in Premiere pro
2
In Premiere Pro, how can I delete clip portions that are between these labels?
0
After transforming the position of a clip, how can I remove the side lines?