I'm trying to setup a way to do video conferencing between two individuals. The tricky part is that the users need to be able to touch the screen and have the other user see their hand on their end. The only way this will work is if the camera is behind the screen filming through it. This has led us to this theoretical setup: camera + projector on one side of a transparent screen / person on the other side. The issues that we've run into are:

Please let me know if there are any screens that come to mind or an alternative setup or if I should stop right now.

You will need a one-way mirror for this. It's related to something called front projection.

This setup is typically, except from the touch part, used with auto-cues (text projected in front of a camera that f.ex. a news anchor reads from appearing looking into the camera). 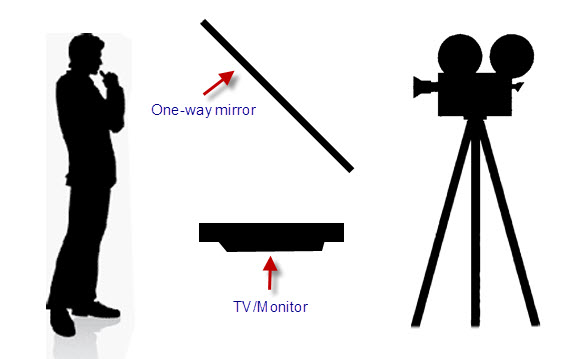 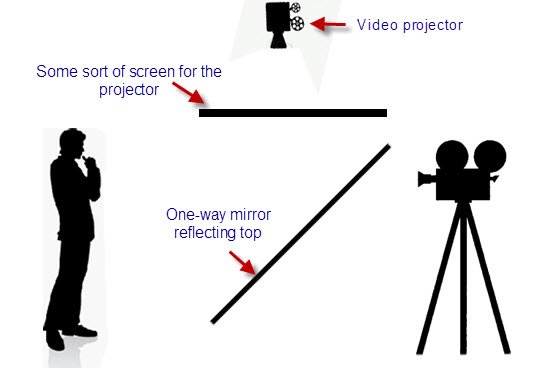 In addition to that, you would need a video mixer so you can super-impose/mix in the interface that is supposedly touched (same as the projected image from the TV or projector) (alt. do it in post with composition/video editing software).

The tricky part is to get the overlayed video (the user-interface) synchronized with the touches from the talent. You would need initially to perform some calibration, f.ex. an image with fixed corners and a center that is projected while the talent touches these spots. Then scale/zoom/place video/camera to match the super-imposed image that is projected.

The other tricky part is the lighting conditions. The room need to be relative dark for the mirror to work properly at the same time as the talent is properly lit for the camera. You can darken the area behind and around the mirror with black colored textile in addition to turn off all none-talent lights and so forth.

0
Large scale video conferencing
1
I am not able to take video with my SD card
4
How to create and film ghost special effects
2
Remove Greenscreen Reflections?
2
Put branding over tv signal
0
how to do the video commentary with you in the corner of the screen?
2
Green Screen Streaming