What are the best techniques that you have seen for hidden camera filming? It would probably be on-body, so needs to minimise motion blur/judder. This isn’t a question about legality or ethics - just techniques.

I've been on guerrilla shoots where they had a GoPro peeking through an O on a protest sign, held at head height like the protester isn't actually protesting right this minute.

Also, I've seen a regular DSLR on a long lens, which whilst not technically hidden, is so unremarkable in public that no-one noticed.

The boom op had a mic up his sleeve.

Half the movie 51 Degrees North was shot using these tactics, though it does require that some of the people in the scene are placed, or that the crowd is large enough that these things go unnoticed.
For instance, the flash crowd at Piccadilly Circus were mainly in on it. The tube scene had a carriage-full of SAs taking up most of the space, to get the reactions right whilst the principals & crew ran the scene for a whole morning between stations without TfL catching on that the shoot was taking place.

Behind glass [shop window etc] can also work, if your subject is fairly static. 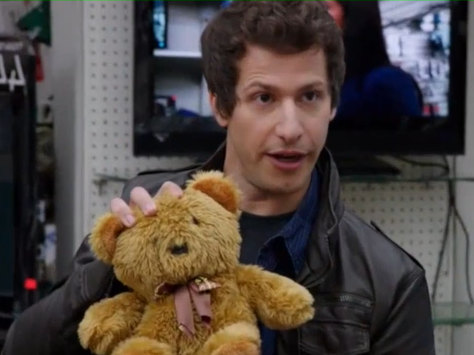 The picture is from an opening scene where two police detectives are at an electronic store that has had a burglary and are investigating. The other cop is interviewing the owner while Jake (pictured) nonchalantly describes how the thieves look like because he has looked at the footage from a camera stuffed inside a teddybear1 that was was placed somewhere in the store.

1Referred to as "nanny cam teddybear".

Not the answer you're looking for? Browse other questions tagged camera or ask your own question.

4
Periodicals/magazines/blogs for cinematography?
3
What are the minimum camera characteristics required to record a movie for cinema?
3
Recommendation for a flying camera device
4
After Effects: Create an isometric/orthographic Camera
6
Does 4K impact quality when filming in low light? (other parameters being equal)
6
What gives a local TV news show that "look"?
2
Starter Camera(s)
1
What equipment do I needed for filming dance instruction?
3
SDI - serial digital interface
1
Best camera for turnkey studio recordings