Why is my video file so large when there isn't any video?

I am using Final Cut Pro X on a new M1 MacBook Pro (16gb of RAM) on AC power, and I have noticed that when I export the video project (share) the resulting video file is so much larger than what I would expect from my knowledge of the PNG photo format.

I created a "video" that is actually just my attempt to present a recorded phone call. So video quality doesn't matter. In the image below you can see that I created a static title card that lasted 60secs with an audio track (size 36mb) that lasts 30mins. I chose the export settings based on what I thought would be the fastest encoding and smallest video size. However encoding took 12mins and the resulting file size is 51mb. 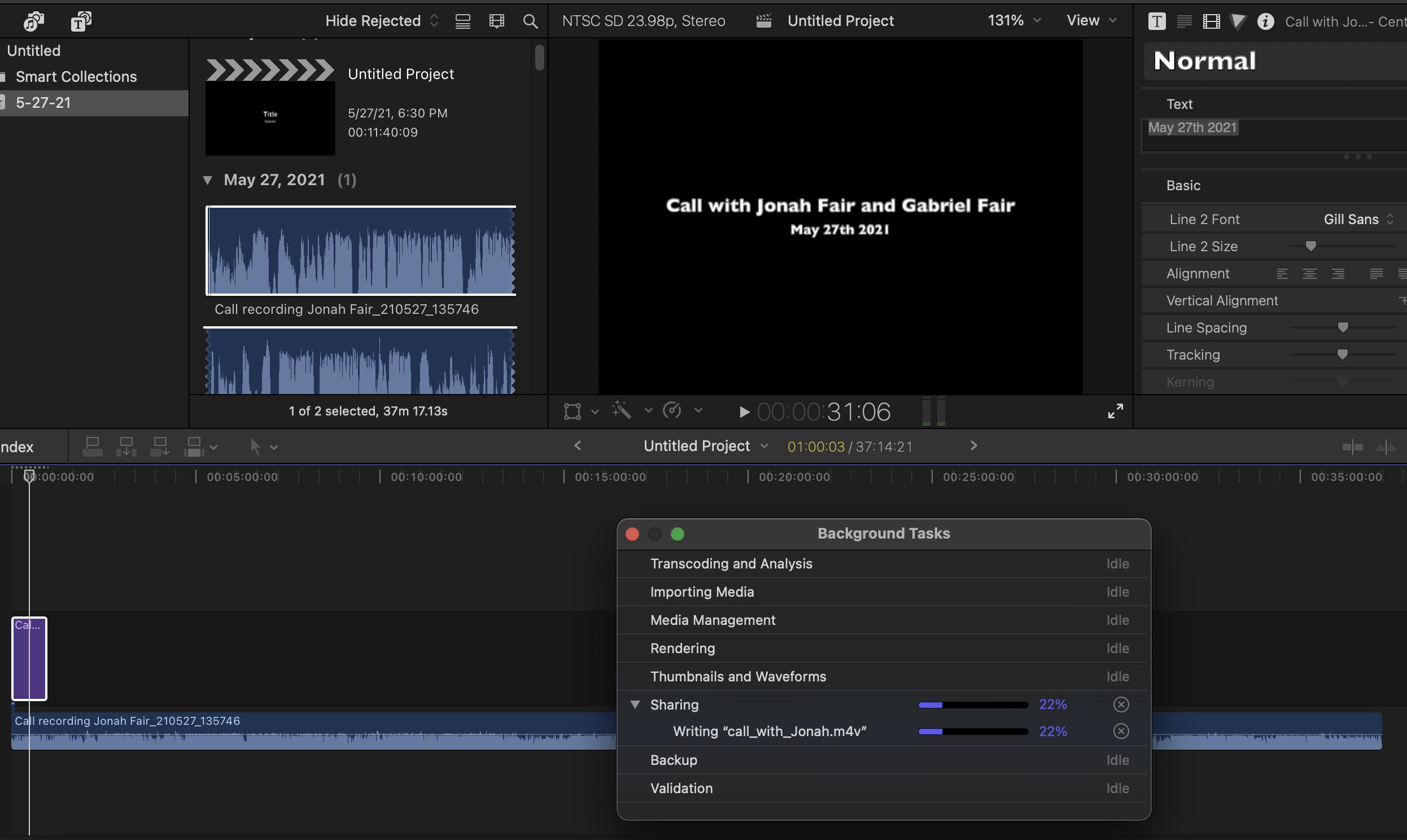 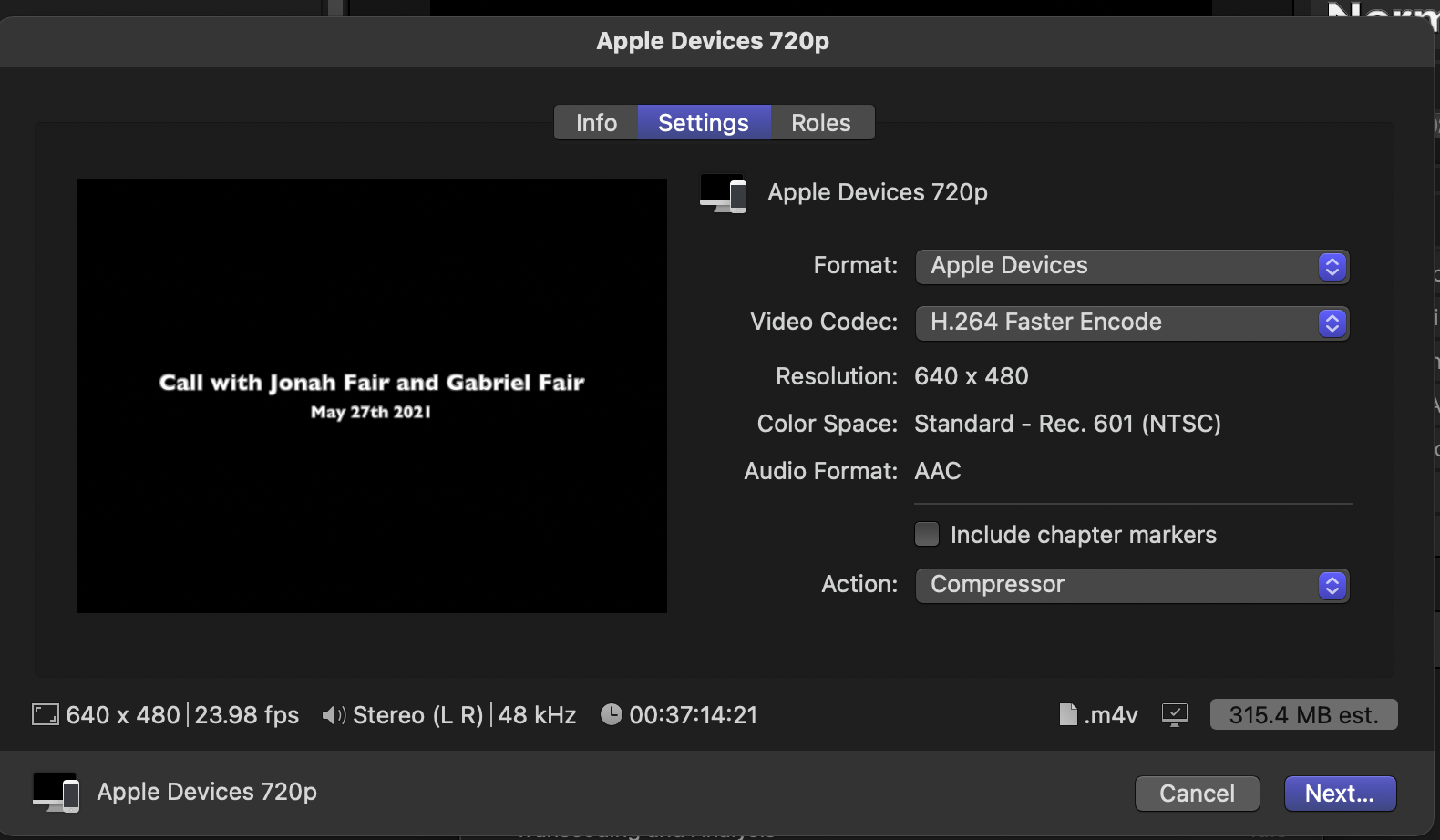 What do I not understand about my chosen export settings and video codec that would cause such a large file size and a long time to export?

What settings should I have chosen instead?

Is there a specific codec that would be good to use when video doesn't matter in a video?

You have 37 minutes and 14 seconds of audio, so it's going to be at least as large as the original audio file (36Mb) plus one image and a few bytes for each frame saying "the image has not changed". You have some 67,000 frames if you build a 30 fps video.

So it will look larger than the input audio file. It could be that the settings are such that the tool you're using adds full frames every now and then, like say once every second. These full frames are called key frames and allow one to start the video midway without having to replay everything from the start. So that could easily add a few Mb of data in a 37 minutes video. A 640x480 frame is about 1Mb uncompressed, probably about 0.01Mb once compressed (since it's just text). Your video has about 2,234 seconds, that would mean 0.01Mb x 2,234 = 22 Mb of key frames only and 36Mb + 22Mb = 58Mb.

Some tools can remove all the key frames. I've used ffmpeg and generated mp4 without key frames. I don't know that the tool you're using would be capable of doing such, though.

If a video does not matter on a video... you could use an audio file like mp3.

But let us assume you are uploading it on a video platform like youtube. Then the video format should be accepted by the platform.

If you want to use it on your website, the most commonly used container is MP4, so use that.

But what you want to change are the video parameters. For example, if you have only one static image, you can change some options:

And now choose an audio codec. The most common is ACC. Use it to maximize the compatibility across players.

9
Best Lossless Video Encoder For Editing
2
Encoding Video For Archiving Using Premiere Pro CS6
0
Best encoding to fit 10hours of 1080p in 30gb?
0
Originally smooth unicolor background shows "steps" in the color gradient when exporting
0
What are the default export settings when I choose to upload to YouTube in Final Cut Pro X?
0
Where are the Source Scaling Options in Adobe Media Encoder CS6?
0
Intermediate Codec for Resolve to Adobe Mediaencoder or Premiere Pro
0
Where to get codecs?
0
Final cut pro export file size is huge (despite the small size of the initial video) - how can I shrink it?
0
How can I build a MOV (QT-rle) file with minimal unnecessary features?