I have an idea for a film project that I would like some advice on.

I want to use my GoPro with the handgrip attachment to "interview myself" on a ski chair lift.

Here is what I mean by that: I want to ride a two person chair lift and on the first ride, with the camera pointed at me, I am going to record myself asking all the questions. On the next ride I am going to wear a different outfit and sit on the other side of the chair and record all the answers. Then I want to edit the clips together to make it seem to the best of my ability that they both occurred on the same chair ride.

I could just standard cut / jump cut the clips, but it will be pretty obvious to the viewers what I did and seem discontinuous. I would like to somehow edit the transitions to create the effect that there are really two of me on the same chair (it will be obvious to my viewers that it is the same person, because they all know me, but it will be funny because I am wearing different outfits and I will talk / behave differently for the two different characters).

What I am not trying to achieve is some sort of photo shopping technique to get two of me in the same frame at a given time, but somehow pan back and forth in a smooth way to make it seem as close to being one continuous clip as possible.

Imagine that two people were actually on the lift, and I pointed the camera at myself to ask the question, then turned it to aim at the other person for the answer, then back to me for the next question. This is what I want, but I have to edit it since there is (obviously) only one of me.

Just to help people who aren't familiar with what a ski lift might look like, here are three screen shots from a video of a friend and I essentially doing what I described above (but with two people instead of ong) 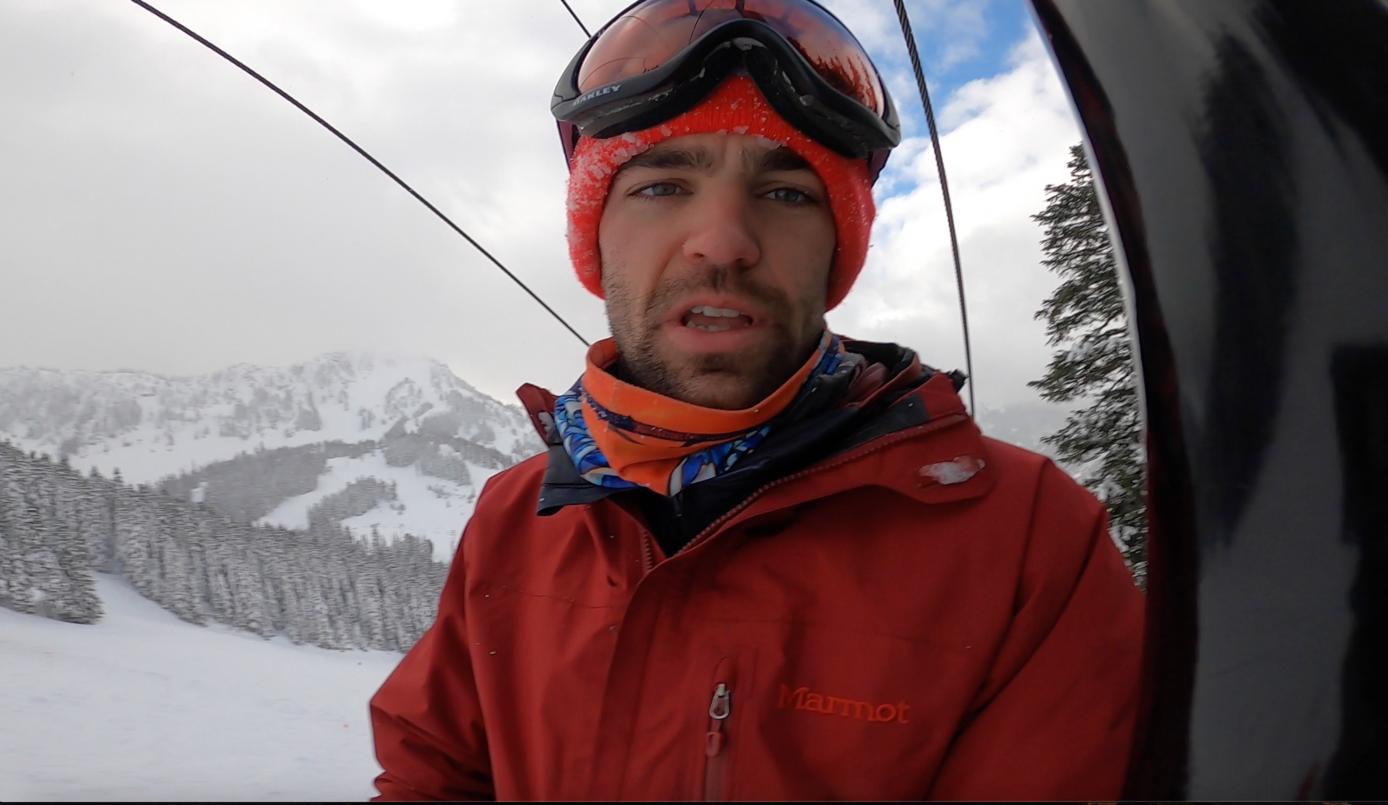 Camera being aimed at me for a question, camera was being held by my friend sitting next to me 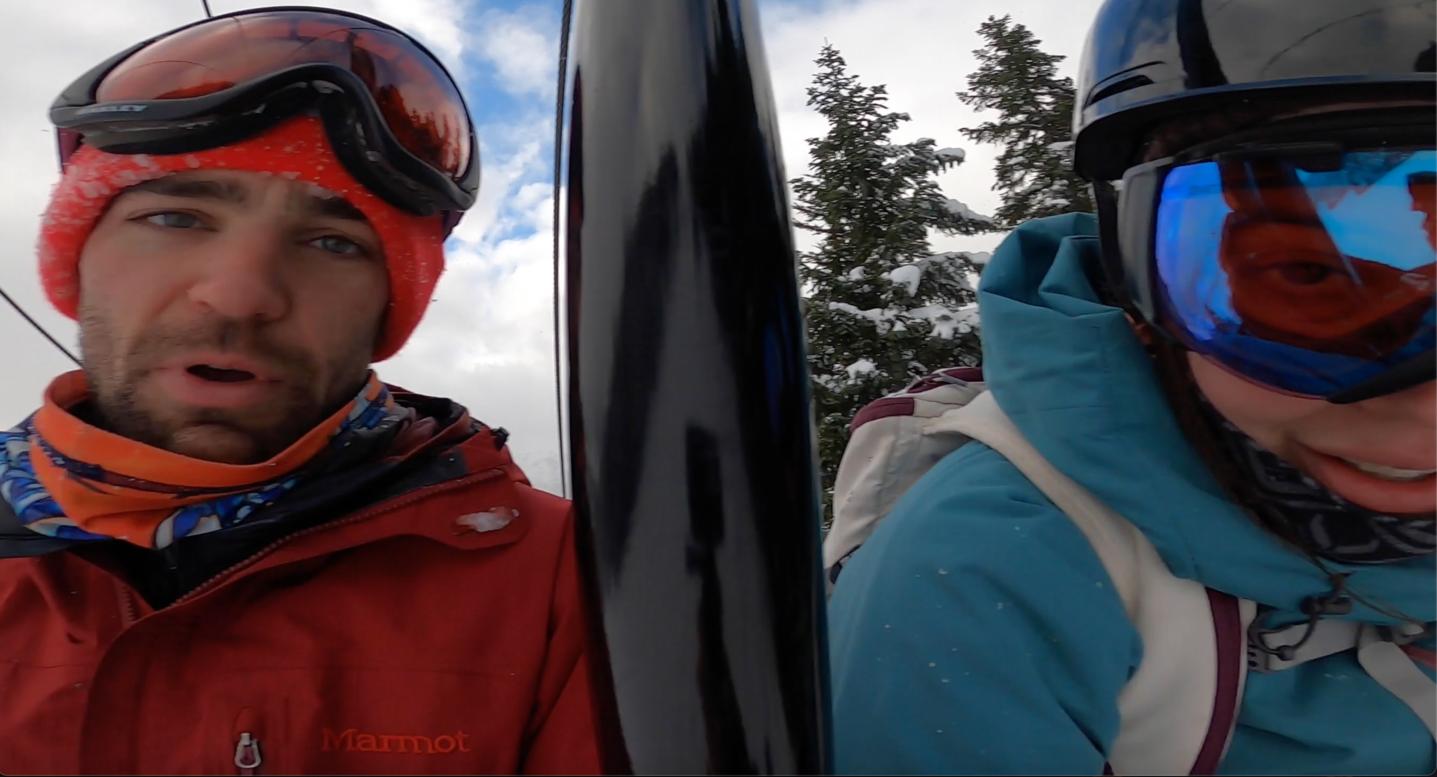 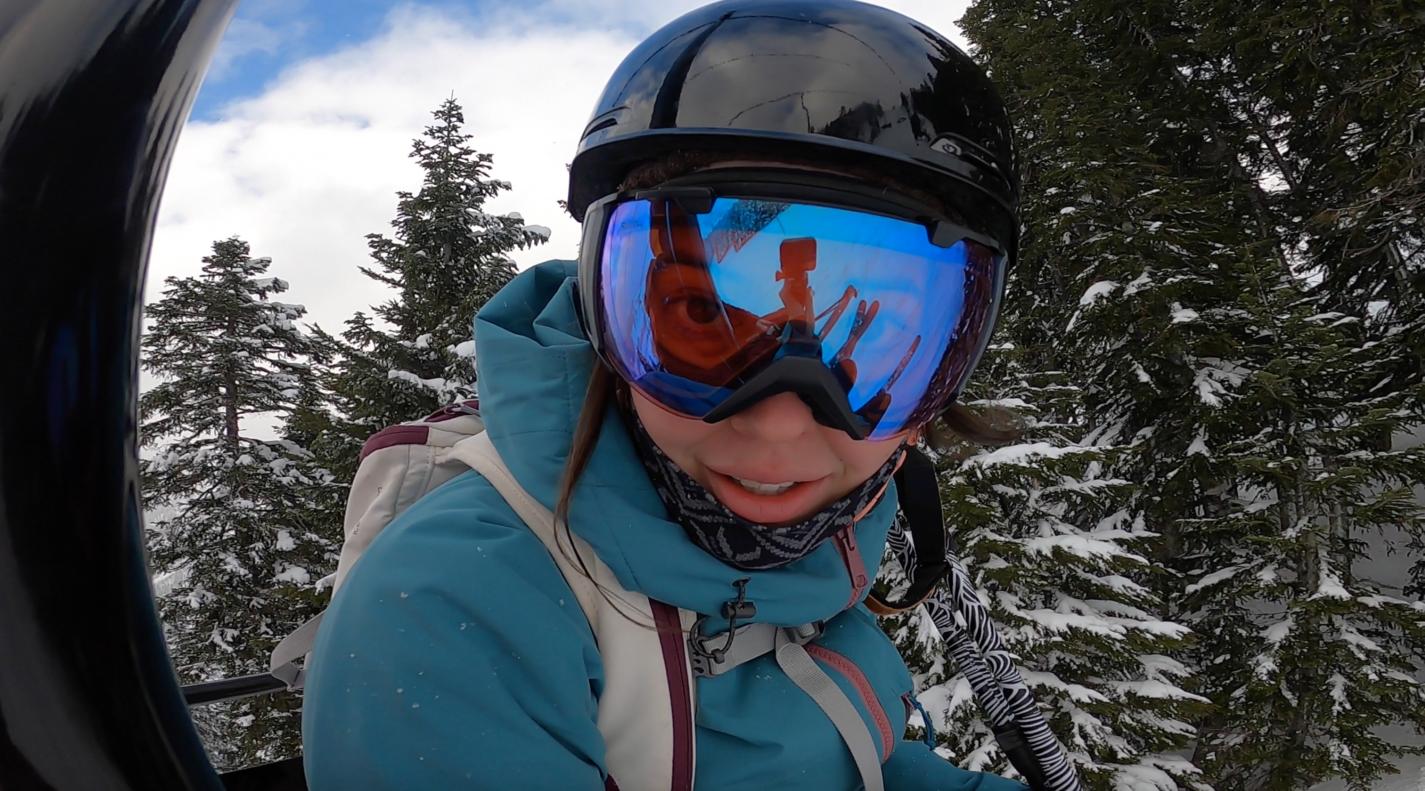 Camera fully panned back to my friend holding the camera

Obviously picture two is unachievable since it has both people in one shot, but I am thinking I might be able to take advantage of the black pole that is in the middle of the chair?

I hope my question is clear, please let me know if I can improve it in any way. Let me know what creative ideas you might have to achieve this goal!

I typically use adobe rush or adobe premier pro for editing.

There is a park near my house that has two swings with a similar pole in between them, and I was thinking I could practice on that before filming on the ski lift.

You could use black screens as section dividers, e.g. one screen could feature a large question mark and the other one an exclamation mark as text.

The idea is to drag the black screens across the video frame from side to side at the same speed you're panning. Make the animation so that it looks like the black screen is attached to the middle pole.

You could start the speech tracks just before the dissolve effects start, this is a common technique that simulates typical human dialogue where we perceive someone started speaking first and only then turn our eyes on that person. Research J and L cuts if you want to know more about this.

Also record some ambient sound from the lift ride and environment, that can be played continuously on loop in the background.

It would be fairly easy to use a wipe centred on the black pole in the middle of the ski lift. A wipe is a standard transition found in most, if not all NLEs, that crops the outgoing picture from one side to progressively reveal the incoming picture. Wipe effects commonly have the ability to soften the edge,a nd apply a coloured border, both of which could be useful here, a blurry black border would match the pole as it passes across the shot.

If the pan was quick and reasonably consistent in speed motion blur will help smooth out any mismatch in framing or timing. To do the wipe, count how many frames it takes for the pole to pass from one side to the other. Make the cut in the middle of these frames and then apply a wipe effect to the cut (Premiere, like most NLEs, let you do this by dragging the effect onto the cut). Set the length of the wipe to the same number of frames as it took for the pole to pass across the screen, and make sure the direction and angle match.

When shooting you will want to practice the camera movement so that it is reasonably consistent between shots. One or two frames won't matter, but if one pan is 12 frames long and the other is one second long they wont match. Quicker will be better, because the motion blur and speed will mean you won't see exactly what's going on. There is a cutting technique called a whip pan, where you move the camera super fast (or apply movement in post) to cut to somewhere else. It might be of use to you here.

Not the answer you're looking for? Browse other questions tagged premiere editing transitions gopro or ask your own question.

2
Best way to get synced audio from multi-cam Premiere project into Audition and back
2
Can video frame size be increased?
23
Does version control have a part in the video production workflow?
3
What is a subtle displacement at the moment of the cut?
7
Premiere distorts picture while paused
0
Premiere pro transition presets
2
Best transition to fast forward video
0
Simple Transition Effects for Short Video or GIF