Applying effects to only selected characters in Text

Say I made a Text+ object with the following message:

Bold only THIS character.

How would I apply certain effects (like bolding/colors) to only certain words? Where it will end up like this:

Bold only THIS character

Your question doesn't mention whether you're using text+ from the Edit page, or from the Fusion page, but the answer is the same nevertheless. You can't create one text element which contains two different styles from the Edit page. To get individual control of different letters and words in a text+ object, you need to switch over to Fusion. If you created it on the Edit page initially, switching to Fusion with the playhead over the clip will automatically populate the node tree with everything you need.

With the text+ node hilighted, Right-click anywhere in the text entry area of the inspector. Select "Character Level Styling" from the context menu dropdown that appears. 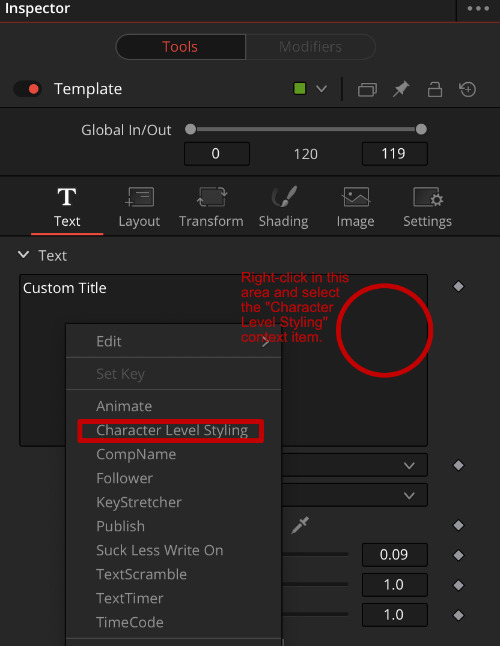 You'll now be able to select individual characters and words interactively in the viewport. Click and drag a lasso around the word you want to change. 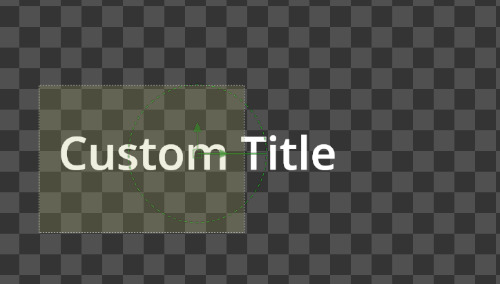 When you release the mouse, you'll see kerning guides to indicate which letters are selected.

You'll find the controls to change character-level styling under the "modifiers" tab of the inspector. If no text is selected, the controls disappear, which is a quirk of the interface which makes the feature difficult to discover. But with the letters selected, Fusion exposes a ton of attributes to control or animate at the character level. The text, transform, and shading tabs will now operate on the active selection, and you can change the active selection at any time. You can also reset all character-level styling, or reset only selected elements by using the buttons in the inspector. 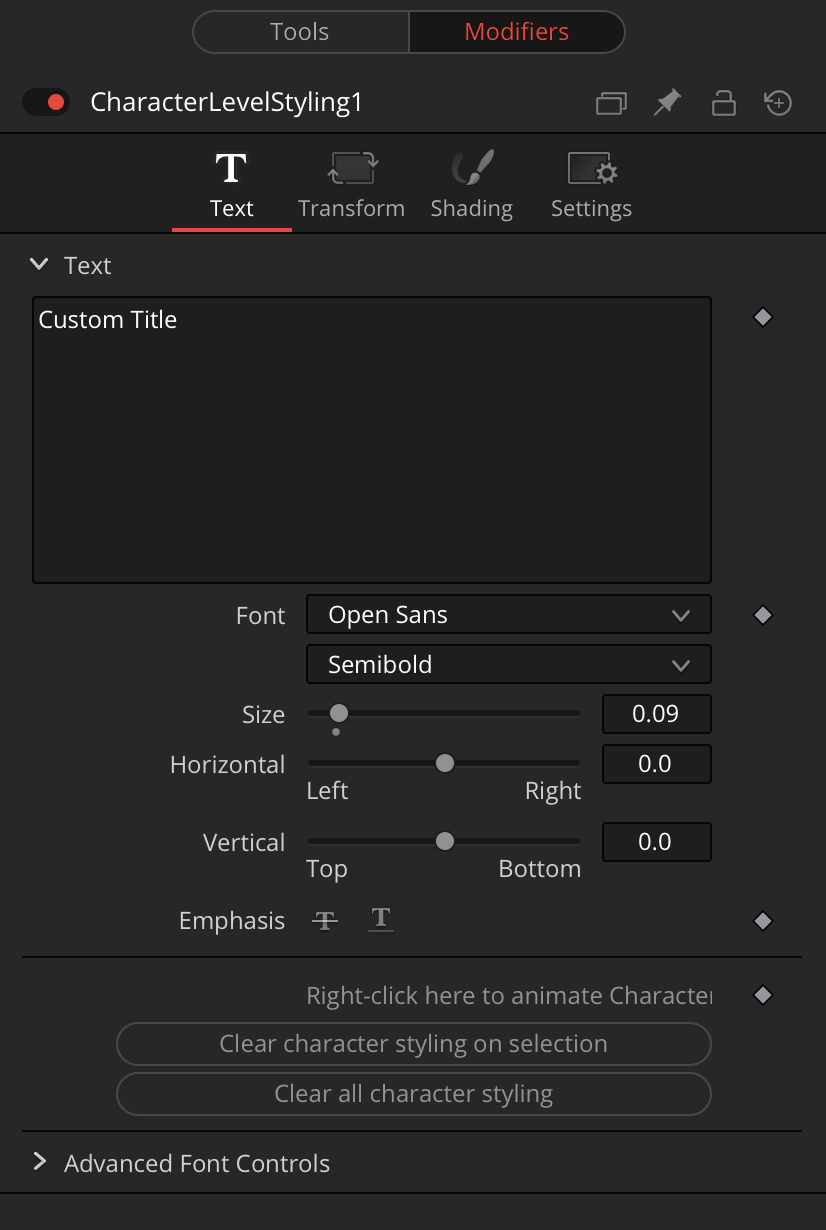 One drawback of Resolve's Charachter Level Styling modifier, is that it isn't very suited to dynamic text changes. For example, say you meticulously style a person's first and last name, with a different style on the first name. Say, for example you style...

...and then learn that there's no "h" in his name. For the sake of argument, you're using CamelCase, with no whitespace between first and last name. When you correct the spelling, your styling will look like:

This is because Resolve's character level styling follows the letter count, including whitespace.

To fix this, and to address your question more directly, you would select the word you want to un-bold by drawing a marquis around it, click the "clear character styling on selection" button, then select the word you DO want to be bold, and change the styling in the modifier tab.

You'll find that this behavior will often encourage you to create an entirely different text+ node (to split styles in fusion) or text+ timeline layer (to split style on edit page), and obviate the use of the character-level styling modifier, which is unfortunate once you get used to its convenience. But on the other hand, when the two elements need dynamic flexibility, they'll need separate logic control anyway.

*These screenshots show Resolve R17b2, which will look slightly different from yours, but the functionality is the same.

3
DaVinci Resolve: Track with points outside of a window
4
DaVinci Resolve: Blur and fade title on top of video
0
How do you make orbiting text in Davinci Resolve 15?
0
Smoothly keyframing a wheel to decelerate from point A to B
3
Working on audio effects for multiple clips at once
3
Tracked Text Title renders “strange”
3
Which tool or method should be used to make text on a whiteboard look natural / right?
1
Overlay video with picture with transparent parts
1
Wrong centered merge in Davinci Resolve's Fusion