What does it mean to “check a waveform monitor to make sure that my highlights weren't clipping too much”?

In this article Roger Deakins talks about how he would "check a waveform monitor to make sure that my highlights weren't clipping too much". What does he mean by this?

A waveform monitor is used for video rather than still images. A modern WM has has many functions, but the one he is referring to is the equivalent of the ability to detect peak signal levels using a still image histogram. Wikipedia - Waveform Monitor 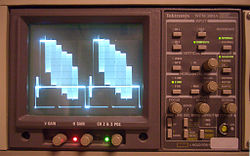 In a single still image you either have never exceeded maximum level (no pixels at max value) or you have in a variable number of cases. While the usual aim is to have no pixels which are "clipping" you can have a small number do so across the while image with limited loss of quality. Too many in one area and you get obvious flat spots.

In a video signal typically 24 frames a second are viewed and the occasional frame with a small percentage of "maxed out" pixels may be aesthetically acceptable (depending on how purist you are). Hence he says "weren't clipping too much" raher than "weren't clipping". ie he wanted to ensure that the signal had not pushed further into highlight clipping than was deemed acceptable.

FWIW- gross highlight clipping is sometimes acceptable or even designed in as part of the intended image in still and in video photography. A favourite example of mine in "video" is in "The Lord of the Rings" scene in Meduseld, "Hall of the kings of Rohan" in the village of Edoras. The hall is very rak and light strems in from a large open doorway. The camera points, as it never normally would, into the light and exposure is for the characters with the light behind them. As the characters cross to and fro the area behind them washes out completely and to a variable extent as the light streams across the floor. The cameraman knew exactly what he was doing - but a waveform monitor would have done him no good at all - by all normal standards the image was junk.

Not the answer you're looking for? Browse other questions tagged video-quality camera or ask your own question.

24
What factors are important for DSLR lenses for shooting video?
7
What equipment do I need to be able to produce 'HD quality' videos?
3
DSLR RAW video: 1080p or 720p?
2
Quality of VHS converted to DVD
2
Getting a model to hit same exact mark
2
16 days in Thailand with GoPro Hero 6 Black [Help]
2
What is 1200p HD?
3
What is this colour blocking/ banding i'm seeing and can it be corrected for?
0
What pixel count is required for a near perfect digital copy of an old movie?