I have filmed a green screen sequence where a figure acts like he walks through a doorway. The effect I want to achieve with the green screen is to make it look like the figure is walking into pure energy / light. Here is my workflow thus far:

However, it looks a bit dull and I wanted to make the 'pure energy' look more convincing by adding a burst / beam of light effect. Similar to below: 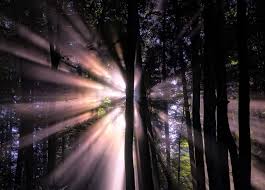 How do I achieve the effect where the beams of light appear to shine both behind and above the figure?

Browse other questions tagged premiere effects or ask your own question.

4
Old video tape effect in Premiere Pro
1
Does anybody have suggestion to recreate this light trail effect?
2
Blur a face using only one video layer with Premiere CS6?
2
Can't add effect to master clip on Premiere Pro CC
0
Adding screen flash (Hitfilm 3 Express)
1
Attach image to layer with tracking mask
3
filming iridescent liquid or effect
0
How do I keep a pattern overlay layer effect from moving around separately when animating?