Issues with transcoding to a MXF container

I'm new to FFmpeg too, and I'm trying to transcode a HEVC file to a mxf file and I'm having some issues. The original file is a rip I made from a Bluray HDR movie a while ago, its container is mkv, and I honestly didn't remember the codec I used and all that stuff, but Mediainfo is telling me that it's HEVC, UHD, main 10, level 5, RC. 2020, cbr, 4:2:0, 10 bit. The thing is that I want to make a trailer in Adobe Premiere Pro, which I've been using for a while and now I'm dealing with its 2020 version (which, to be honest, it's not so good because of random crashes). I intend to export an HDR video, even knowing that Premiere's internal monitors don't support REC. 2020 yet.

Since Premiere doesn't accept mkv files, and I want to lose the less amount of quality possible (hence, I don't want to make too many transcoding steps), I tried to take the proxy approach, but after trying many times I couldn't make them sync with the original footage (the proxy was always a couple of seconds late or early compared to the original file, which defeats its purpose for editing). The only ones that didn't have this issues where the ones made with DNxHD/DNxHR (I guess it could be related to them being cbr as the source files, while Prores is vbr. Idk, it's just a theory), but even though they are synced with the footage, I get stability issues with them as proxies (the program hangs when trying to manipulate them, even moving a clip or making a cut many times caused a crash).

Well, after all this, I decided to try to edit with a high rip of the original file, with a non long-OP format but with high quality, so I could export directly from it (hence, no proxies). The choice was between a Prores flavor, or a DNxHR flavor, and I decided to go for DNxHR because, idk, I've always preferred cbr for streaming and quality purposes. File size is not an issue for me, and I have a beast of a PC to handle them. Since I want to retain the most quality from the original, I used FFmpeg to transcode to a DNxHR RGB 444 10 bit file into a mxf container (which I've read it's better than MOV for editing purposes) from the original mkv file, but after trying many times I read that on the audio side the mxf container only accepts pcm audio, and my mkv file has two streams, both DTS 5.1. Apparently that's why my FFmpeg command worked for the video part, but always gave an error on the audio part. This was my initial command:

(audio stream 2 is the one I need, hence the 0:2. I need a single file for editing, with only one language, which is the second stream).

Well, that command didn't work, and I realized that it worked only if I changed the extension of the output file to MOV, so it's a container limitation I guess.

Here's my problem: I could easily create a mxf file with the video as DNxHR 444 10 bits and the audio as uncompressed pcm in 6 channels (the source file is 5.1), with this command:

It sounded like the ideal command to me, because I want to retain the 5.1 audio, and just copying the stream sounds like a good idea to me. Ffmpeg did its job, but when I imported the file to Adobe Premiere Pro, I could see that the audio couldn't be placed in a 5.1 track, but in 6 individual mono tracks. I could use this, but it's really annoying having to edit with 6 separated tracks for every single cut or clip. In other words, I wanted to edit with a DNxHR 444 10 bits and 5.1 audio with their tracks being recognized by Premiere as a true 5.1 audio, and showed as only one 5.1 track. If I rip the original mkv movie to, let's say, h.264, it creates a 5.1 audio track without issues, but editing in h.264 is not ideal at all.

The question is simple. What would you do? I'm still trying to do this with DNxHR 444 10 bits, but I'm starting to assume that I won't be able to incorporate the audio inside a mxf file without it being separated into individual pcm tracks.

Ideas that I had, and wanted to know your opinion, or if you have a better idea:

Any ideas? This is my first hdr project and I'm having this elemental issues. What would you do? Thanks in advance.

PD: I used the last version of FFmpeg , and have an AMD 2990WX cpu, with 64 GB ram, a Nvidia GTX 1070 card, Windows 10 with the latest drivers and latest version of K-Lite codec pack. Using Adobe Premiere Pro 2020, and sometimes Adobe Media Encoder 2020. Adobe Premiere is optimized for memory use, not performance. Sadly, I still have a sdr monitor for the meanwhile.

UPDATE: A friend of mine, after telling him about the issues I'm having, said to me that I should stop worrying about the container, so his suggestion was to use FFmpeg to transcode the original mkv file (h.264 main 10, level 5, REC. 2020, cbr, 4:2:0, 10 bits) to a mov container, with DNxHR 444 10 bits and AC3 as codecs (or just copy the original audio stream), because for this purpose having the master file in mxf or mov container is not going to make a difference in quality or performance. Is that so? I'm still learning all I can but I've read more than once that mov should not be used as often, as it's an old type of container with certain limitations (I don't know what they are. I still have a lot of reading to do, but I've read that mxf is a better container in other forums too). If that's a good idea, the command would be the following (please correct me if I'm wrong):

My main goal with all of this is having a non long-GOP file with the highest quality for editing, color correcting and exporting directly from it, preserving all the hdr data, and keeping the audio as 5.1 that can be recognized by Premiere Pro as a single 5.1 track and not six individual tracks. I was going for DNxHR 444 10 bit (cbr as my original file), but can't figure out the audio issue with a mxf container, and I could transcode to a mov container without problems. I'd like to know if there's some catch with using a mov container instead of mxf, and also I would like to know what would you do in my situation (and if there's an extra idea about how to use proxies with my original file without having sync issues, please let me know).

I could see that the audio couldn't be placed in a 5.1 track, but in 6 individual mono tracks

I just ran a quick test on my machine, and while a 6 channel mxf does import by default into Premiere with 6 mono tracks, if you right-click and run modify > audio channels on the imported clip, you can can change the clip channel format to 5.1 and the number of audio clips to 1, which should then let you add the clip to the timeline in the way you want. 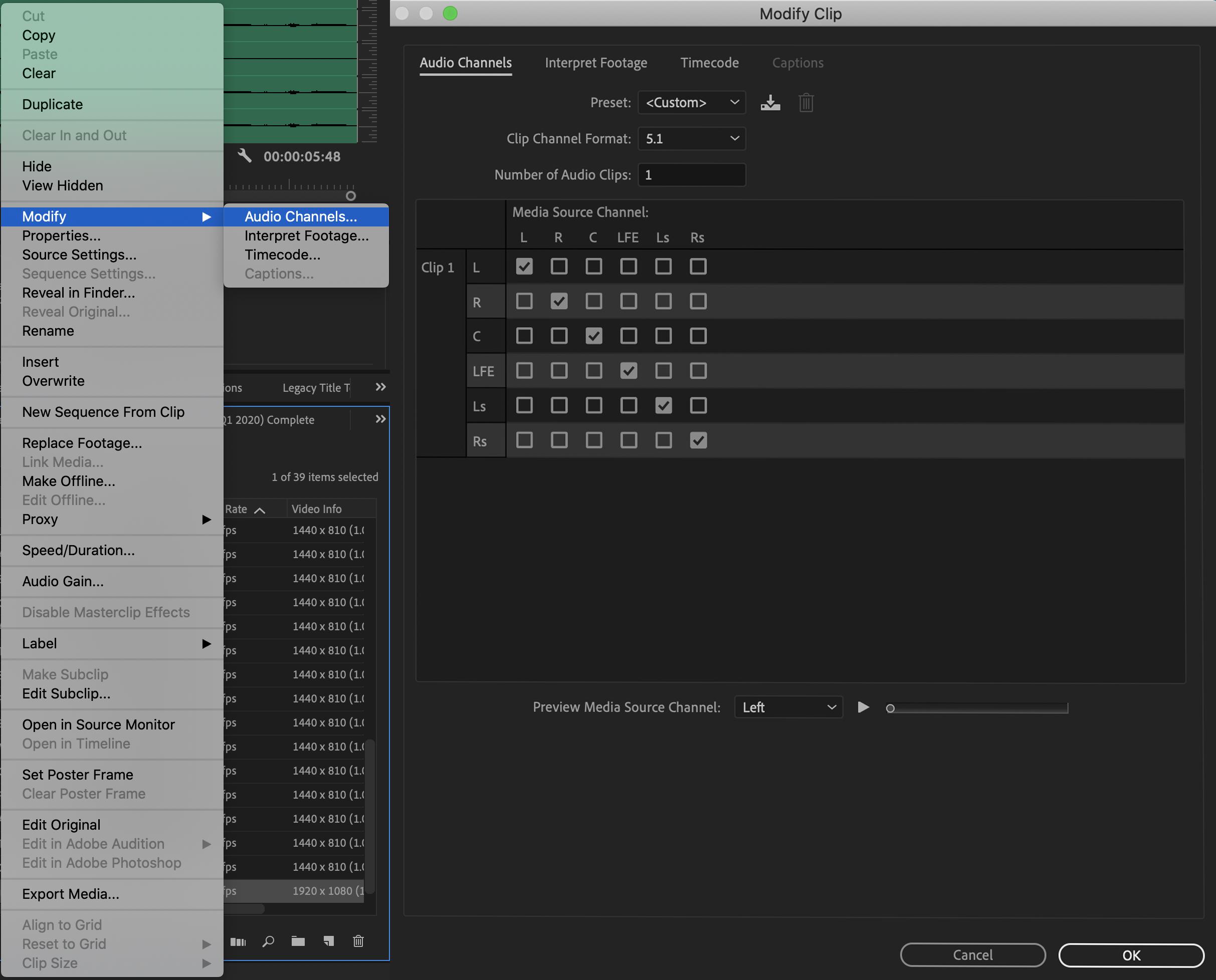 You should be able to use FFMPEG to reassign the channels such that Premiere be able to recognize it as 5.1 channel layout.

Not the answer you're looking for? Browse other questions tagged premiere encoding mp4 mxf dnxhr or ask your own question.