How can I achieve this lo-fi laggy extreme camera shake effect in After Effects or Premiere?

There was recently a short film released by a music collective 'Jackboys' with a very lo-fi, noir look to it, and when transitioning verses, the video cuts to shots with intentional, extreme camera shake with lag, and for the short film I'm working on, this effect is perfect. A large part of this effect is going to be in the filming of the video, but I'm not sure what the best way to approach this is. Should I just shake the camera a lot when filming, or should I lower the shutter speed first? The laggy part looks like it's either a result of the camera used or was made artificially using After Effects or Premiere. How would I go about getting the lag effect in one of those Adobe programs?

OMG strobe! That's what the "laggy" effect is; it was very popular with "experimental" film school students back in the nineties. It went the way of lens flares and the posterisation effect; some would say it is better left in its tomb, but that's a matter of personal taste. 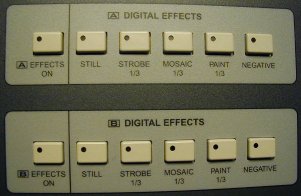 If you slow down the video you'll see what's going on, the apparent frame rate is slowed down to four or five frames a second, destroying the illusion of smooth motion. In the nineties, to achieve the long exposures that give the light trails and motion-blur you had to shoot on a film camera that could do variable frame rates; these days a lot of digital cameras can do it. You can lower the frame rate in post, but you won't get the trails and motion blur. Here's how to do it in After Effects.

You need to find a camera that can shoot at a frame rate to around 4-10fps, and that lets you adjust the shutter speed to give you as long an exposure as possible. Then, as you said, go nuts shaking the camera around. Your audience will thank you /s.

5
Camera shake produces ripple-like effect
2
Equipment for documenting an adventure journey
2
Acceptable to adjust colour levels dynamically
2
How to reproduce this rainbow color feedback effect in After Effects?
0
How to achieve this "trail effect" - After Effects
2
How can I recreate this overexposed effect from the last scene in 'The Lighthouse'?
2
How can I recreate this distortion effect from Midsommar?
1
How do I improve sharpness of foliage and distant objects during video recording?