Vegas Pro 13 : Project's and Timeline's framerate are suddenly not the same

So here's the thing : I'm editing on Vegas Pro 13, 25fps according to my origninal files. I just imported some sound I "mixed" externally. And now, my timeline acts in 24fps although my project is still in 25fps. I don't know if it has something to do with the files I imported but the ctrl Z option is dead now. I can't figure out what the problem is, it's the first time I see anything like that in Vegas. The timeline should act according to the project setting, right ? As shown in the screenshots bellow, I can't control every frame. 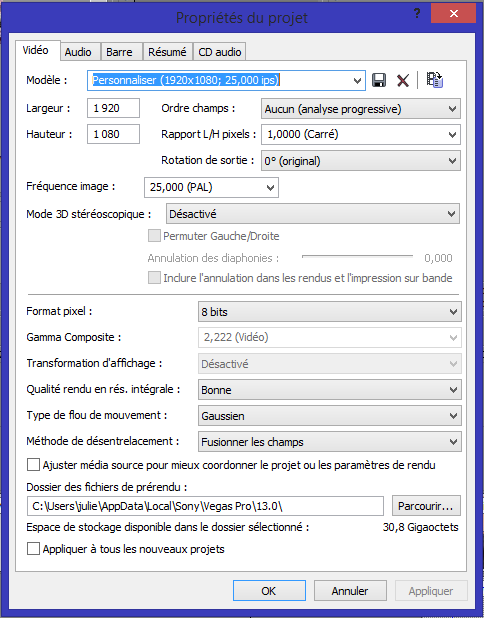 Are you sure that your footage is in 25 fps? If so, try and see if you can change the interpretation of the clip like in premiere. Other than that, a restart is the only thing I got left to propose.

Not the answer you're looking for? Browse other questions tagged video framerate vegas-pro or ask your own question.

3
Vegas Pro 12 vs Vegas Pro 12 Premium
9
Does raising the framerate while not changing the bitrate result in quality loss?
1
Vegas Pro 13 - Shaking Image - Including Preview
2
Sony Vegas Media Generators not appearing
0
Premiere Pro CC export produces dark, muddied video
0
Vegas Pro will not properly render PCM audio in avi file on the timeline
2
Sony Vegas pro 15: Can not move Image in Pan/Crop
0
Why are there missing frames in the Vegas Pro editing timeline?