During frame by frame watching of some video taken via Instagram app one noticed strange unwanted artifacts on the video caused by camera flash. Please, consider below several sample image frames taken from the video: 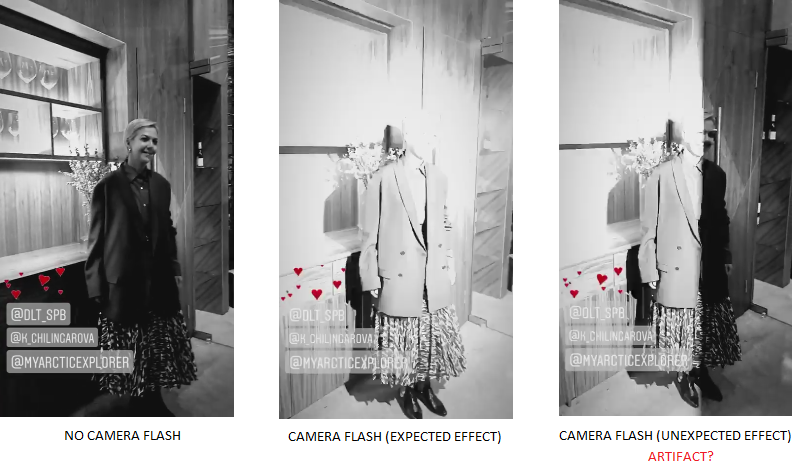 Thanks in advance for the explanation.

This is actually a collateral effect of the concept of rolling shutter. Most video devices do not expose all the frame area at once. They expose starting from one side and (up or down) and move from there. (The example has the camera rotated 90° so the effect is on the sides of the frame).

This can be either a mechanical element that moves or rotates or an electronic system.

As the flash of a camera is a really fast burst of light, it can sometimes be captured in one zone of the frame, by the time another part of the frame is streaming the data, the flash burst is over, so this zone of the image is transmitting the non-illuminated scene.

On still frame photography, this is the reason you have a minimum sync speed.

Frankly, it is really hard to avoid this situation in an environment such as the example posted, because you can not sync your camera to that flash.

On a controlled environment, like lighting in a movie, you could add the lighting in post-production, making one full frame white, and probably some other just a bit exposed.

Another way to control it is by using a slower burst of light. Rather than using a flash that lasts about a thousandth of a second (which disappears really fast), you use some system that flashes on tenths of a second. This way the burst of light has time to be captured by the shutter of the camera.

Not the answer you're looking for? Browse other questions tagged camera effects compression lighting flash or ask your own question.

1
Lighting and Camera Angle of the Video
3
1080p60 recording has very strong compression artifacts, default Neat Video not reducing them much
1
which camera is best for conducting the interview constantly as one-man show?
3
Using a Flash to Light Video
0
exporting video from flash for html5 video changes colors
1
How do I avoid objects having flickering edges when I encode a screen recording to mp4 using x264 and ffmpeg?
0
Can video cameras perceive lights in a way that they will totally change the color of molten metals?
0
Lighting a subject far away from the camera