I have a video clip of a number dial (think old style alarm clock) that I want to use to display scores on a scoreboard. The video clip shows the numbers flipping each second but I was planning on using the Retime Speed or Retime Frame curves to pause the clip, then restart it for 1 second each time a score is made. It works great!

However, I cannot extend the duration of the video clip longer than the original source file (40s). As you can see in the image below, then trying to grab the right side of the clip and move right, it glows red (instead of green, which is does when moving the end of the clip forward or backwards less than 40 seconds. Likewise, when I right-click and try to change the duration manually to 35 minutes, it doesn't work. No error, just doesn't extend.

One other thing - you can see in the test image below that I jump to only one of the middle frames by the end of the clip - there are many more frames left to be usable. I had thought that adding in this pause would allow me to extend the clip but it hasn't.

Both the "Flip Clock" video and the project are 29.97fps 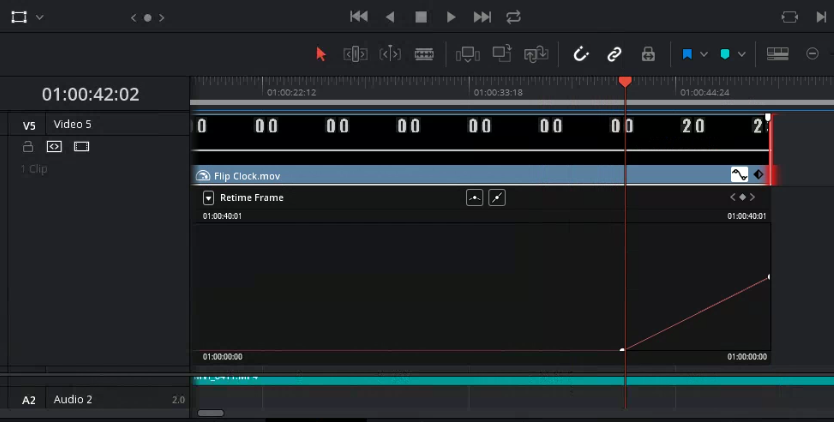 If you use Retime Speed instead of Retime Frame, the clip can be extended. Retime Frame gives you the ability to arbitrarily access the source media according to the curve, but there's no concept of time stretching--the clip in the timeline has a fixed amount of time and the only variable is what frame to play at a given time. Retime Speed controls the concept of time. If you slow the speed down to 50%, you get 100% more time for your clip to play. When you slow the speed down to 0%, you get infinite time to play your clip (and interesting edge conditions--so keep it to something like 1%).

In the example above, when you're grabbing the end of the clip, you're performing a trim edit, but the clip has reached the full extent of the media, and shows red to indicate that there's no more media.

To instead retime the clip, you need to first call up the retime controls by pressing ctrl/cmd-R. Then grab the TOP right-hand corner of the clip. When you're hovering over the correct spot, the mouse will change to a double arrow, indicating that you're about to perform a rate stretch action. To dismiss the rate stretch tool, either click the "x" on the left side of the clip, or hit cmd/ctrl-R again.

This works when you're trying to interactively stretch either END of the clip. If you want to interactively adjust the timing of a place in the MIDDLE of the clip, you'd first need to add a speed point. To add a speed point, summon the retime controls, and click the black disclosure triangle that appears in the middle of the clip, at the bottom, and select "add speed point" from the context menu. When the new grey/white control device appears, notice that there's a difference between dragging one handle and the other. Dragging the top handle stretches and squashes time, slowing and speeding it. Dragging the bottom handle changes the point in time at which the speed change occurs, but it does not slow or speed the clip.

You can rate stretch a moment indefinitely, but as long as you're only stretching it, time will always progress, even if it's very slowly. To freeze time, click the same disclosure triangle you used to add a speed point, and instead, select "add freeze frame." This actually adds two speed points, between which time does not progress. This is probably the approach you should use for your clock, because it will prevent Resolve from interpolating between two frames.

By right-clicking on the clip, you can also expose the retime curve, which uses more traditional keyframes and bezier handles, and presents options for both "retime frame" and "retime speed" which are two additional interfaces for the same controls. This is the interface in your screenshot. In fact, you can use all three methods simultaneously and interchangeably, and doing so will give you both better insight into the tools' relationships, but ultimately more precision in retiming elements of your videos.

One final note. Like many actions in Resolve, the interactive retime controls respect the difference between Selection Mode (A) and Trim Edit Mode (T). If you're in Trim Edit Mode, retiming a clip will ripple the timeline (subsequent clips will alter their timing automatically). In Selection mode, they won't, allowing you to overwrite a subsequent clip by rate-stretching an earlier one overtop.