I'm trying to recreate this effect in Ae using a box mock-up. I'm only interested in the animated background covering the box. Iv structured my Comp so that the design is below the box mock-up and I'm using the box as a track matte.
the main issue I'm running with is maintaining the details of the box and eliminating the fact that the effect resembles a clipping mask in Photoshop more than a mock-up.

would love to hear different approaches or tips, cheers.

Go back to your reference and look closely. Although the pattern moves across the paper continuously around the edges, it still respects the 3D geometry of the scene. So the paper on top is on a different plane to the paper at the sides and the front. In fact that reference is totally possible to do with stop motion. 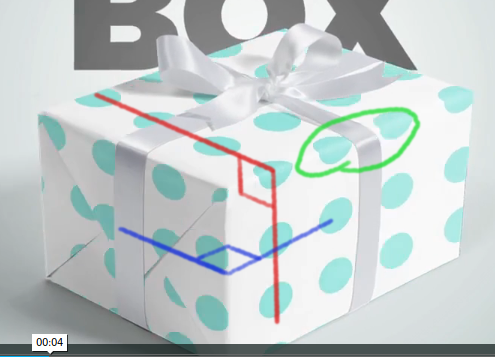 With that in mind you have to use AE's 3d capabilities. make a subcomp with your paper pattern. Now in the containing comp make a rectangle mask on the subcomp with the same proportions as the side of the box. Click the 3D icon on that layer, and angle it so that it matches the perspective of your reference. Now using another copy of the precomp add a mask that matches the proportions of the top of the box (use the width of the first mask so that the two edges match). Make this layer 3d and make the first layer its parent. Set its orientation to 90, 0, 0 (don't have AE on this machine so I'm guessing, it could be 270, 0, 0). It should now be at right angles to the side and horizontal. You have to move it so that it meets the side at the top of the box (use 0 as the x coordinate, half the height of the side as it's y coordinate and half the width of the top as the z coordinate). I'll let you work out how to add the end (hint, do the same thing but change the orientation to rotate around the y axis, not the x axis). Imagine you were making the box out of cardboard and think about how you'd rotate and move each piece to make the box.

This will achieve a stylised box, but you won't get too much in the way of realism without a bit more of work in AE. Things like the slightly rounded corners that catch specular highlights (circled in green), which you could use soft edged shape layers to do, and an additional triangular mask for the folded over flaps at the side (rotate the layer 180 degrees so it doesn't match, and angle it out just a fraction so that it casts a shadow). Most importantly add lights to give some 3D shading.

1
Intersecting animated masks
1
Video overlay - how is this effect created?
1
How do I recreate this bouncy effect?
0
Does some macro exist for creating this text effect?
0
How to achieve this “trail effect” - After Effects
0
How to create this effect?
0
What Effect is this?