I am currently attempting to animate a character using Duik 16 but I am having trouble linking some of the body parts so they stay connected.

I imported an illustrator layered file into After Effects and was methodical in my approach creating layers for the body parts of the character.

To illustrate further, I used the puppet warp tool at 3 separate positions on the leg, then I created the bones from those pins using the DUIK 16 rigging plugin. From those bones I was then able to create a controller using the auto rig button to allow the body part to bend about. The eventual goal is to be able to create a walking cycle.

I followed suit with this method using the tutorial in the video link here as a basis. I would like the rear foot (in its own layer) to move as a child of the rear leg layer. For example when the leg moves upwards the rear foot should stay connected. I understand you can use the auto rig feature on the entire body if the parts are carefully named, however I wish to just warp the leg with the controller to get the same effect. I have uploaded an attached image to illustrate the problem. There is a parent constraint button which looks like it was designed for this sort of issue but I am having difficulty finding any documentation on how to use it online. I tried parenting the rear leg and rear foot layer but to no avail. 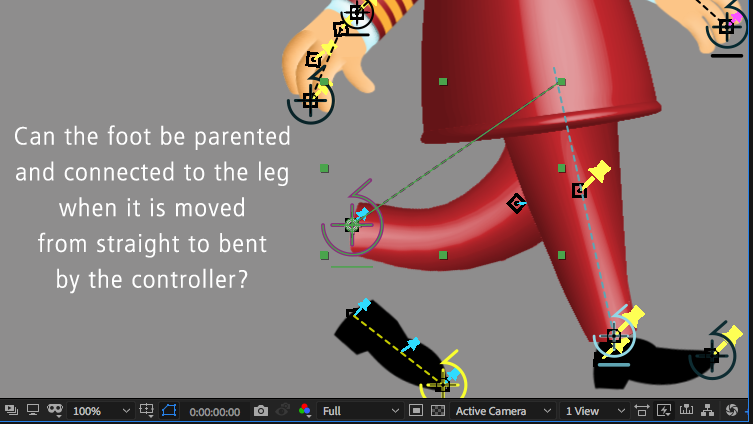 Any help would be greatly appreciated.

Browse other questions tagged after-effects animation or ask your own question.