How do I remove video scan lines in DaVinci Resolve (or Fusion?)

I have little-to-no prior video editing experience, but am trying to edit together a video from when a friend and I flew in a full-motion flight simulator for a website.

I shot the video with my DSLR, but unfortunately the frame rate of my DSLR was apparently very close to that of the simulator's projector, which resulted in visible yellow lines moving across the video from bottom to top somewhere around once or twice per minute (presumably the projector's scan lines.)

Unfortunately, re-shooting the video with a different frame rate isn't really a feasible option in this case, as I'd have to travel again to the city with the simulator and it also costs a small fortune to rent it even if I were there. If I had thought about this problem, I'd have shot in a different frame rate the first time, but I unfortunately didn't notice it until after the fact (I was a bit too busy flying the plane to review the video in real time.) 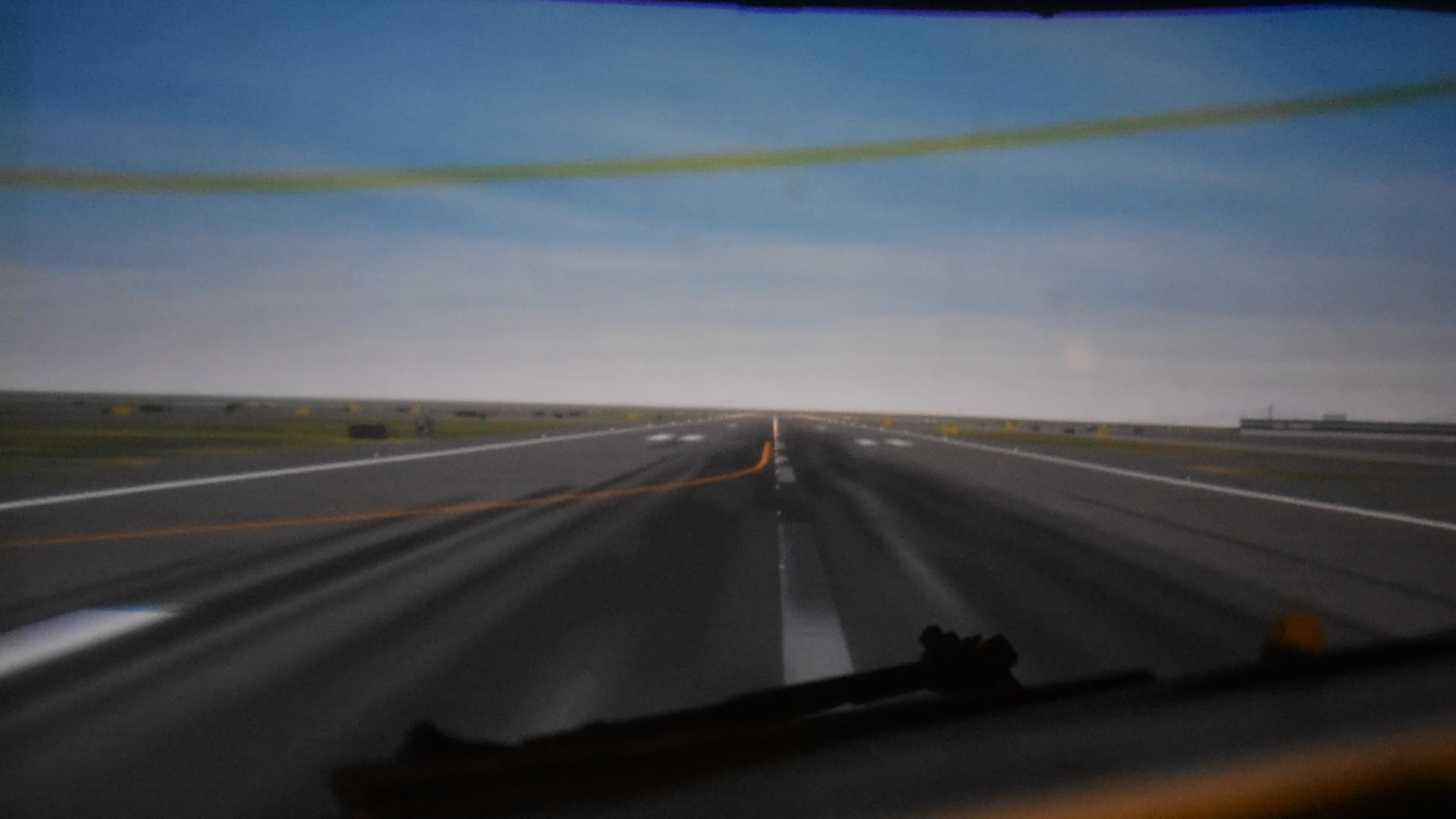 The curved yellow line on the runway is supposed to be there. The straight yellow line across the sky is what I'm trying to get rid of. 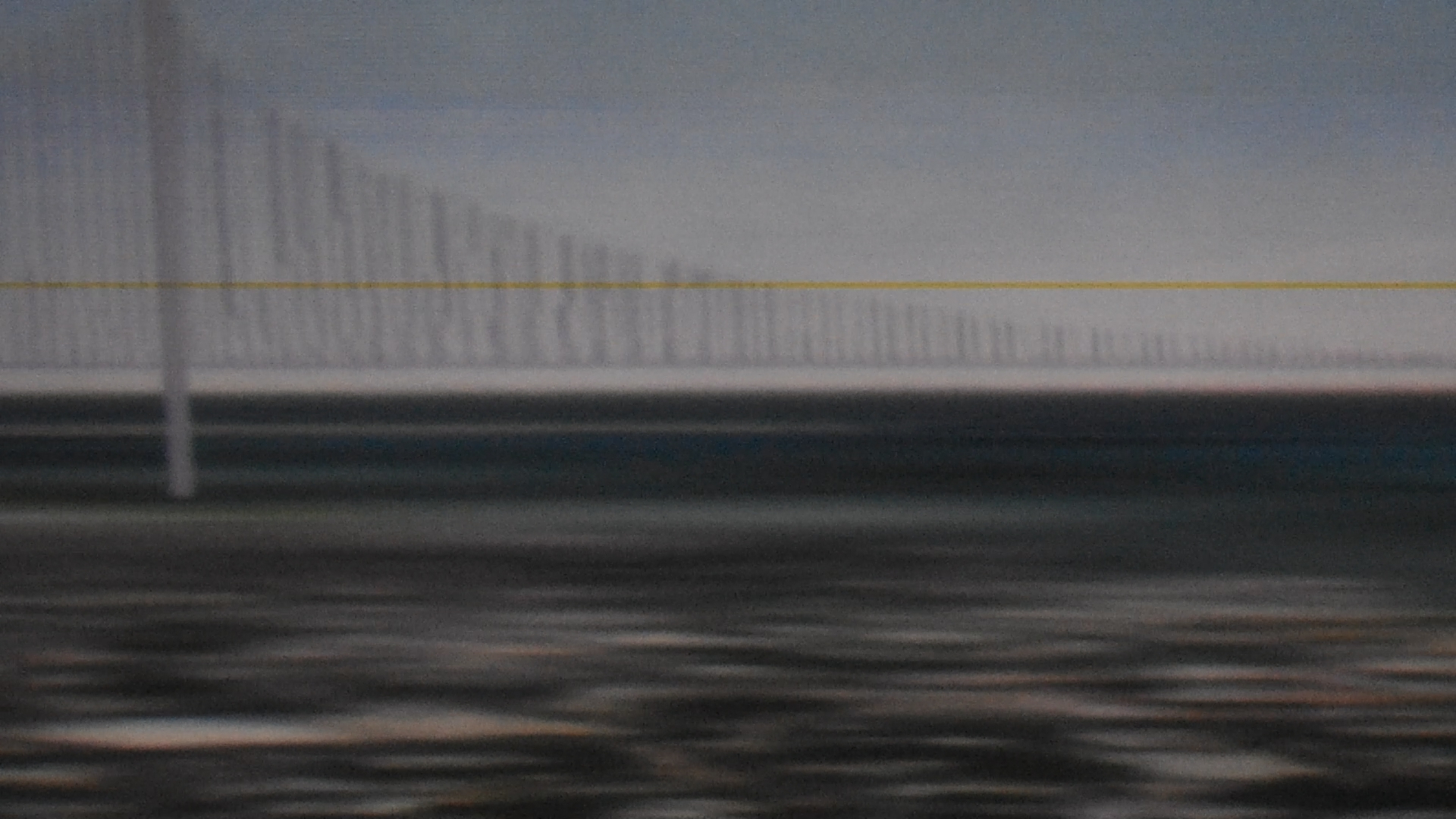 Again with the straight yellow scan line across the sky ruining the scene. Note the relatively featureless sky.

I'm editing the video in DaVinci Resolve 15 (the free version, which now also includes Fusion) and am trying to get rid of the lines as much as possible.

I can get a key on the lines without too much trouble using Resolve's qualifier tool in combination with a power window and the tracker.

Here are the strategies I've tried for getting rid of the line after keying it:

I've tried using color curves (especially hue vs. saturation and hue vs. luminosity) to remove the yellow hue and match the brightness to the scene. This works well enough for when the line is passing over the ground, as I can turn the line into a shade of grey or white that blends in very well with the ground scenery (white in the case of the runway stripes/numbers, grey otherwise.)

Unfortunately, however, my tinkering with the color correction wheels and curves hasn't been able to produce anything that blends the line well with the sky. I can git rid of the yellow hue easily enough, but I don't know enough about video color correction to get the result to be something that blends in with the white and blue in the sky. I just end up with a grey or black line across the sky instead of a yellow one, which is still no good.

Match Move with a Matte

I've also tried creating a matte by exporting a still of the scene when the yellow line was not passing over the sky. I then fed the matte into a Match Move node and had the Match Move track the scene in order to get the proper scaling, panning, and rotation on the still as the scene progressed (the airplane is pitching, rolling, and yawing a bit, so the sky moves around.) I then keyed the line in the video, inverted the key, and fed both the clip with everything but the line being keyed and the match-moved matte into a layer mixer node so that the line was replaced with the image of the sky behind it.

My node graph for this setup looked like this:

(The key mixer shown is being used in order to blend a few different qualifier and power window based keys together in order to fully track the line as it moved across different colors.)

This strategy worked alright for some of the scenes, though some of the other scenes contained skies that were so featureless that the tracker in the Match Move node refused to track the sky. It would either never track at all or only track 2-3 frames and then give up. Unfortunately, tracking the terrain instead wasn't really an option, as the jet was moving across the terrain quite quickly (and, even when I did try that, the terrain was also rather featureless and not being tracked well.)

So, what strategies would you recommend for getting rid of these lines?

If I could just blur the lines into their surroundings enough to not be noticeable, that would be great, but I'm too much of an editing/color correction novice to know how to do that properly (especially for the sky.)

If there's something in Fusion I could use to get a decent track on the mostly-featureless sky, apply that track to a still without the line, and then composite the video with the lined alpha-ed out on top of the still, that would be great, too.

Browse other questions tagged dslr color-correction davinci-resolve or ask your own question.