How do movie makers navigate point-of-view among still characters

Some movies seem to move the camera amongst the people in a crowded scene, but everyone and everything is completely still. For example, in the series "The Flash", season 3, episode 16 starts off with such an effect.

In "The Matrix", various angles on a still situation were shot by having a series of adjacent cameras, and I suppose some image processing was used to interpolate between their images to achieve the effect of continuous panning. This can't, however, be used to seemingly weave a camera among the people in a crowd.

Was the effect achieved by computer-generated imagery (CGI)? The characters looked so real, and CGI characters are usually pretty bad. Unless the technology has advanced so much, and the challenge of achieving realism is simplified by the fact that they characters aren't moving.

To those who marked this question as duplicate: I already referred to the Matrix in my post. I explained that the puzzling aspect of this question was that the POV seemed to traverse amongst the group of people. Hence, this seems to differ from the previous question that was referenced, the answers to which contained links about techniques involving cameras positioned outside the group of people in the scene, i.e., as per the Matrix film that I mentioned.

You assume that the Matrix technique cannot be used to weave a camera among people. The exact same technique - a combination of multiple cameras, cgi, and interpolation - can do exactly this.

That said, the Flash has much more mature cgi technology than the Matrix, and in fact is famous for the cgi quality. Check out this video for some behind the scenes info. The majority of the intro you mention appears to be cgi.

In the series "The Flash", season 3, episode 16 starts off with such an effect.

You undermine the power of "Hey guys, get in a comfortable position and hold your breath".

They are all in simple positions. I'm sure you can stay still for one minute or so. 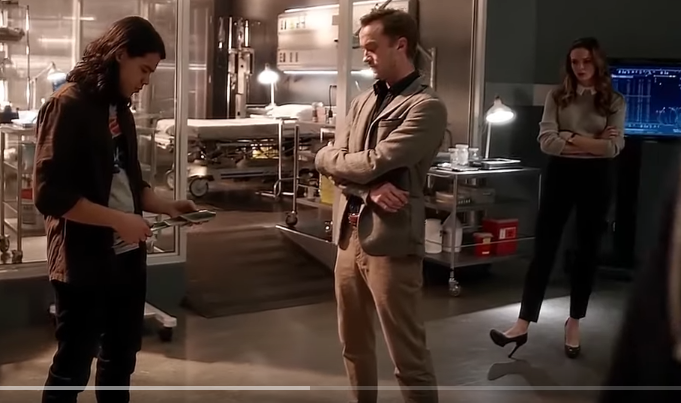 Image belongs to The CW

You can add a fast framerate, let's say 60fps for the slow-mo parts, and cover any movement of the actors with the "warp" effect.

For more dynamic poses, you can use multiple cameras. You can have a bunch of cheap ones (for a tv production) or rent some dozens of them and put them on some rig. Shoot that on a green screen and compose it.