Why do one pixel wide lines look like a twisted ribbon on this DLP projector?

This is a bit of an odd application but I figured I'd post here. We have a EIKI EK-623U projector mounted approximately 10 feet from a white glossy surface. The projector is mounted parallel to the surface and mirror mounted at 45 degrees is in front of the lens.

The projector is plugged in to a Windows PC via HDMI and is set to the recommended resolution of 1920x1200, "extended" display and "landscape, flipped". Focus, keystone, etc are set via the remote and at this distance when the center of the image is in focus the edges are a bit blurry. The projector is set to rear projection mode to correct for the mirror. 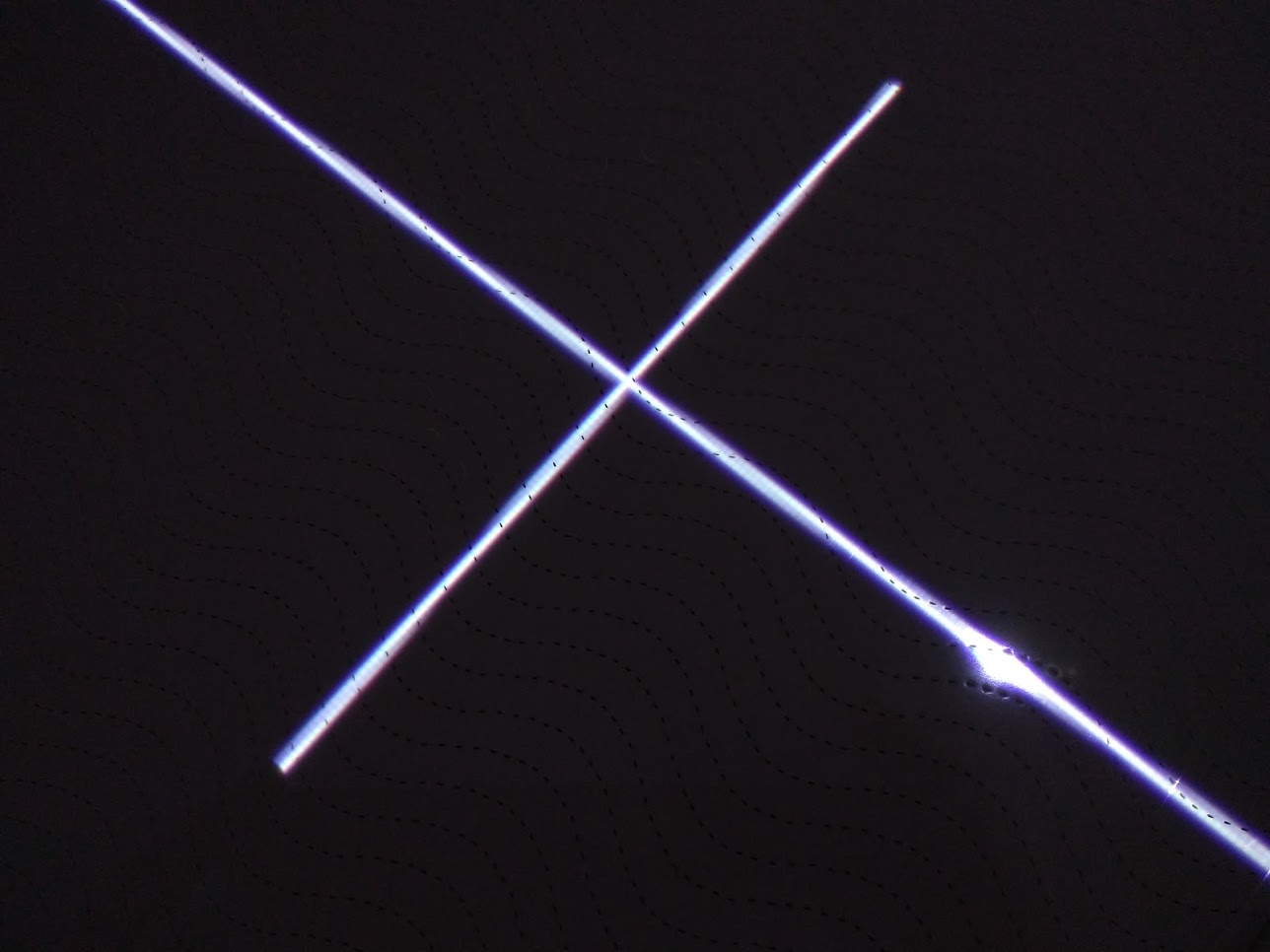 That photo is of a straight, 1 pixel wide line intersecting another. The lines are white on a black background. The photo was taken at an angle to reduce glare.

If you look at the lines they appear to be ~2 pixels wide (compared to the "grid" that you can see the projector throwing), however they also appear to vary in brightness along the length of the line, almost like it thinks the lines are on an angle and it needs to dither to present them correctly. 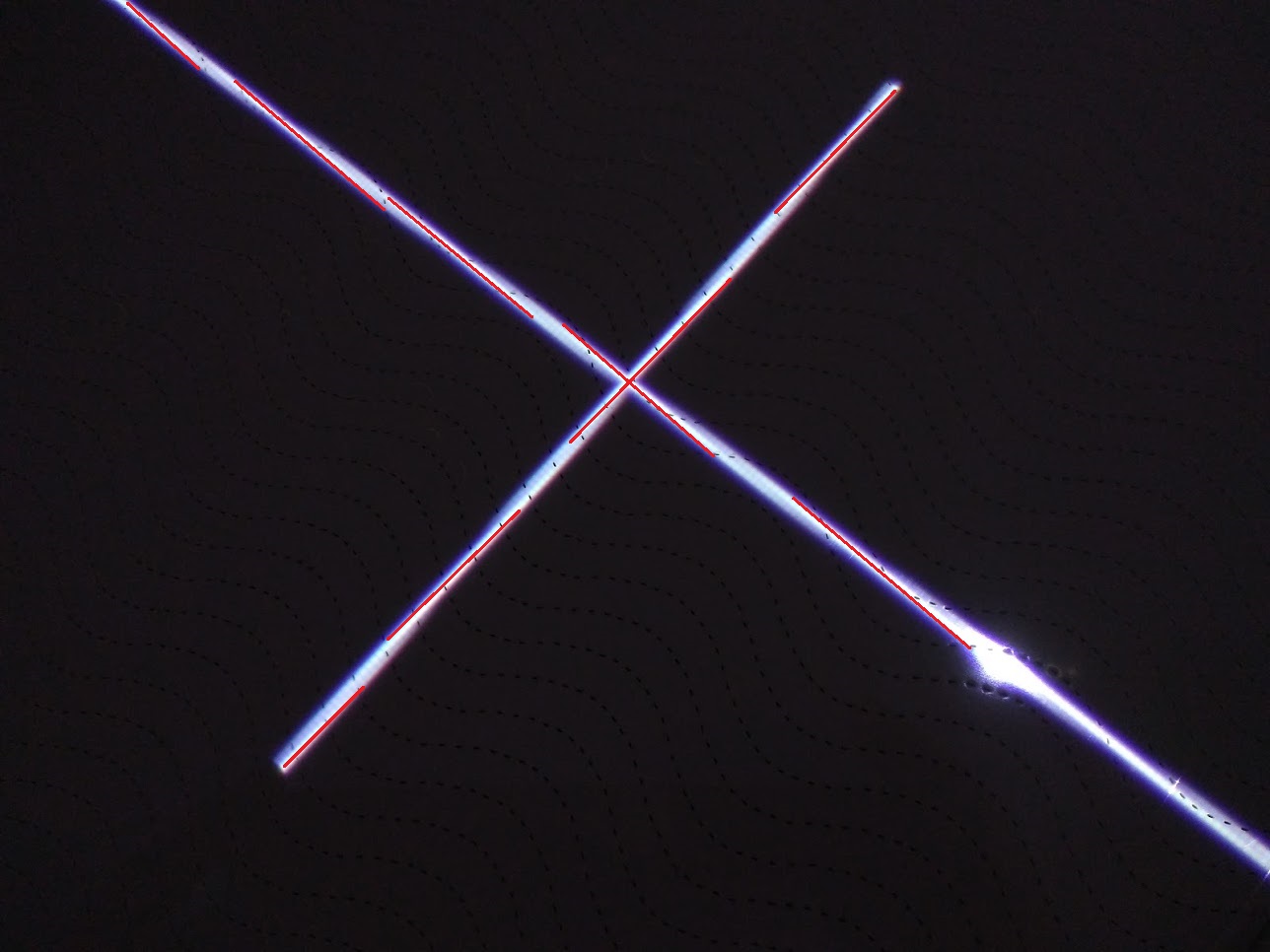 Since the pixel grid that the projector displays is a rectangular grid of rectangular pixels, how do you display something that isn't rectangular? Think about a pixel where the outline of the line falls half-way across it—half the pixel is in the line, and half out. How does that pixel display?

There are a couple of ways of doing it. You could set a threshold at which the pixel is either on or off and switch between the two. This would create a staircase on the horizontal line, where pixels were close to the point above and below the threshold. This wouldn't look that great unless the projector was extremely high resolution, where the jagginess was too small to see. The projector in the picture is nowhere near that level of resolution, so another technique to smooth out the jagginess is needed. 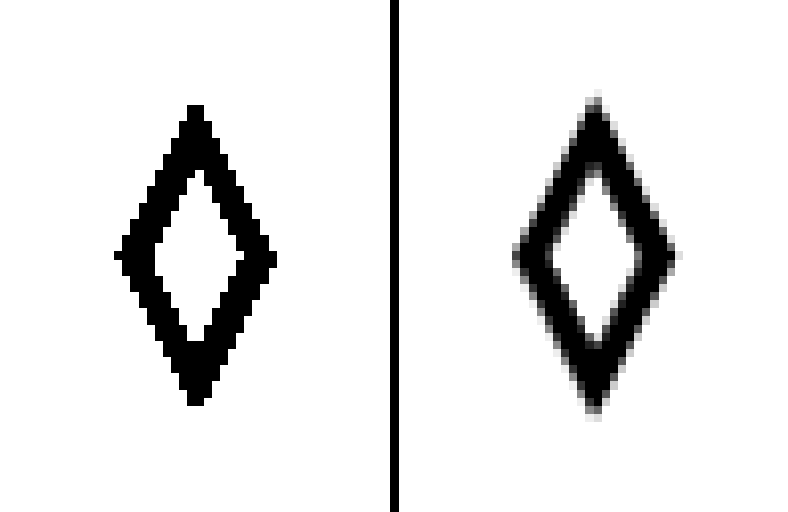 The technique is called Anti Aliasing. Where pixels are not fully illuminated or fully dark they have an in-between value of grey, proportional to the amount that the line covers them (this is a gross oversimplification, there is a whole science of signal processing behind how it happens in real anti-aliasing techniques).

However the anti-aliasing is not always exactly right. The variations in response curves for viewing devices (screens, projectors etc) means that sometimes the in-between levels that you see aren't what they are supposed to be in theory, meaning that some of the pixels are slightly too bright or dark, adding artefacts to the result. That's what you're seeing.

To improve the image try adjusting or calibrating the projector or the device it is connected to, particularly the contrast or gamma.

1
Is this projector capable of 1080i resolution?