Why headphones doesn't work with mic out port?

It seems I'm the only person who doesn't understand why Mic out port on Sony ecm-xyst1m external microphone doesn't work with headphones, while having the same jack.

I bought that one and first thought it is broken, but at service they told it is not supposed to be used with headphones. I tried to google the topic but it seems nobody even care about that. At the same time very similar microphone from Sony, just wireless - Sony ECMW1M does have headphones output.

Taking into account that A6000, A6300 and even A6500 cameras doesn't have headphones output as well, that sounds like a really stupid design from Sony.

What's the point of having all those switches on sound recording if you can't hear what is being recorded?

Microphones output at mic level, which is a signal that ranges from around 0.001 volts to 0.01 volts. Headphones work at closer line level, which is around 1 volt. Based off that information, you can see there isn't enough power in the output of a microphone to hear it by directly plugging headphones into the microphone. Just because they have the same connector, doesn't mean that the signals are compatible. This isn't Sony design flaw, it is how all microphones work.

Instead of plugging the headphones directly into the microphone, you need to use a headphone amplifier. Connect that directly to the mic and then plug your headphones in to the amp. There are headphone amps available in a number of price ranges, depending on the features and quality you need.

Because it's a line out jack and is meant to go to the Mic In of a recorder. That device is used as an external microphone. 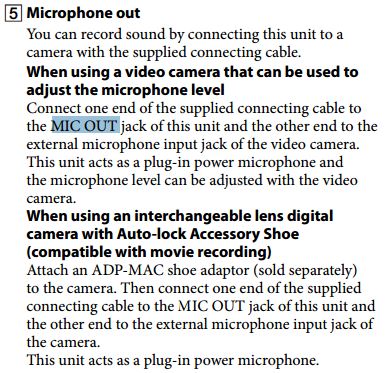 Excerpt from manual, from your link

What's the point of using the external mic as a hearing aid?