I'm having to edit some speech videos (60+ min each) I was given from a conference and the audio levels vary pretty wildly for some of them, due to different speakers and the sound guy not doing a good job with the levels.

In FCPX, the Loudness effect has a slider for Uniformity, but I'm not sure how to easily accomplish a similar task in Pr.

I set the audio type as dialogue and then clicked Auto-Match under the Loudness tab. I also added a Multiband Compressor and enabled Loudness Radar, but I'm having difficulty balancing the loudness in a track where it varies so greatly, as you can see below

Is there a way to automatically (or easily) make the loudness of this clip more uniform?

I know I can go through and manually keyframe it or split the track into sections of equal loudness then balance them all, but I was hoping for quicker approach.

This is a copy and paste from a similar previous question which I answered:

In order to even out the audio of a single stream; you will want to either mix by hand as noted above; or you can use dynamics; specifically Compression.

Within the PPro audio mixer, apply dynamics to the audio tracks, or master track.

You can then use the compressor within the dynamics filter, which you can use on all your tracks, to get your dynamic range all in line.

The simplest way to learn this is just trial and error; but looking at your waveform; you will want to:

Last, click the checkbox on the bottom right of the dynamics filter for each track to enable the limiter. The limiter; a good setting is -2 db.

Then you want to adjust your threshhold in terms of attack and release, what you want to see on your audio (do your setup/testing on the loud sections and soft sections to find the sweet spot); is your compressor VU meter should just barely be jumping... when say someone is speaking. If it's spiking to high; gain down. If it's not jumping at all; gain up.

This will balance out your audio so the soft sounds are adjusted up and can be heard, and the loud sections are not adjusted up; resulting in overmodulation. Its a much better way to smooth out your audio, decrease the dynamic range, and end up with audio that sounds far more balance.

Once you learn how to effectively use the dynamics filter on tracks, I think you will find you will be far more effecient in mixing your audio on the fly. It really does a decent job to just get everything in balance. Then; after you've done that, you can do back and sweeten the audio with a full mix; using a control surface or the pots, recording the pot movements via Touch Setting.

I'm not sure about leveling the audio automatically. You could probably find an effect that does this, after all audio normalisation is a pretty common feature even in audio players, let alone editors. However, I doubt that it would give the exact result you want and given that you are using Premiere Pro, you will probably want more flexibility and manual control.

There is an easy way to do this on the go while watching the video though, which is the Audio Track Mixer. Note that using this method requires you to use one audio track per audio type (e.g. one track each for voice over, ambience and music), which is advisable anyway. 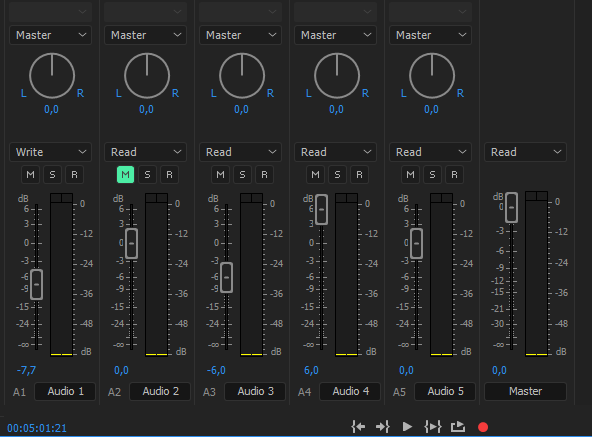 First, open the Audio Track Mixer for your sequence by selecting it in the menu under Window → Audio Track Mixer. There you will see all the tracks in your sequence, along with volume controls for every one of them and the master track (all individual audio channels are mixed down into a master track for the export, but that is another topic entirely). Now, you want to change the Automation Mode of the track with the audio you want to adjust from the default setting Read to Latch, Touch or Write. Then you can simply start playback using the contols on the bottom of the panel and use the volume controls to adjust the volume on the fly. Premiere will save the set volume levels over time.

The Automation Mode setting changes how the volume controls behave:

Off Ignores the track’s stored settings during playback. Off allows real-time use of Audio Track Mixer controls without interference from existing keyframes. However, changes to the audio track aren’t recorded in Off mode.

Read Reads the track’s keyframes and uses them to control the track during playback. If a track has no keyframes, adjusting a track option (such as volume) affects the entire track uniformly. If you adjust an option for a track that’s set to Read automation, the option returns to its former value (before the current automated changes were recorded) when you stop adjusting it. The rate of return is determined by the Automatch Time preference.

Write Records adjustments you make to any automatable track settings that aren’t set to Safe During Write, and creates corresponding track keyframes in a Timeline panel. Write mode writes automation as soon as playback starts without waiting for a setting to change. You can modify this behavior by choosing the Switch To Touch After Write command from the Audio Track Mixer menu. After playback stops or a playback loop cycle is completed, the Switch To Touch After Write command switches all Write mode tracks to Touch mode.

Latch Identical to Write, except that automation doesn’t start until you begin adjusting a property. The initial property settings are from the previous adjustment.

Touch Identical to Write, except that automation doesn’t start until you begin adjusting a property. When you stop adjusting a property, its option settings return to their previous state before the current automated changes were recorded. The rate of return is determined by the Automatch Time audio preference.

For speeches, I would recommend you use Write, Touch is better suited for music or other more dynamic audio.

Not the answer you're looking for? Browse other questions tagged premiere audio loudness or ask your own question.