Lighting for video in room with no windows, choose led or cfl

I want to produce some cooking videos with recipe preparation demonstrations. The shooting area is about 1 square meter. The room doesn't have any windows, so there is no natural/daylight. It is an inexpensive production using a Pentax K-S2 and GoPro Hero4. Currently, I use 2 soft boxes with 135W compact florescent (CFL), which leads to noisy video in the low light.

I want to buy more lights and add like 4-8 more bulbs.

So is it more economical to buy LEDs instead of CFLs? Or am I missing something, like inaccurate light output labels?

It's not just about lumens. Generally you get what you pay for when you're buying lights, and the difference between an expensive LED and a cheap one is not usually the power output, it's the colour fidelity.

White lights look white because they produce a range of colours which our eyes mix together and perceive as white. The better the light the smoother the graph of the intensity across the spectrum is - so there'll be a smooth line going from red up to violet.

Cheaper lights produce a more jagged spectrum. So even though they may look white overall, there will be certain colours that are less intense or missing, and other colours that are brighter.

Fluorescent lights, including CFLs are notorious for having a spiky spectrum: 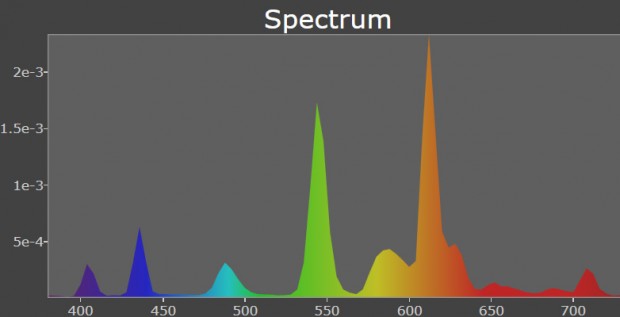 The spike right in the green area of the spectrum can give the footage a greenish, slightly morbid look. This is quite popular in the shaky-cam horror genre, but it may not suit your film: 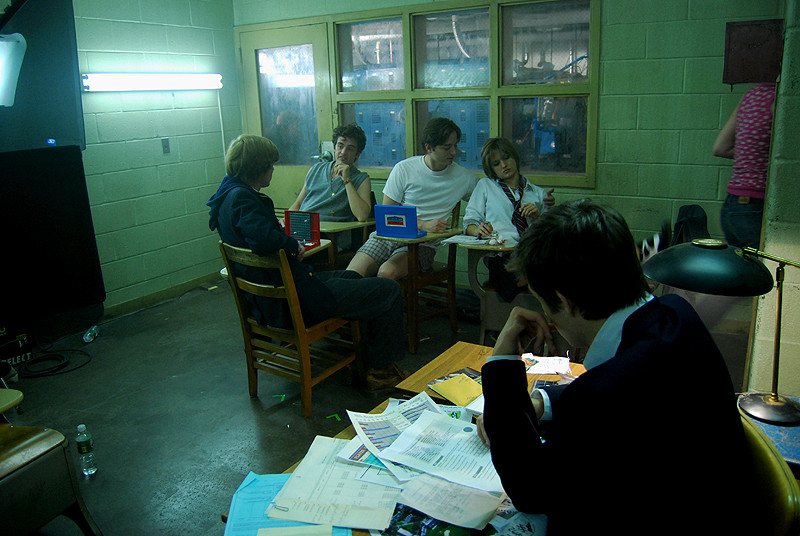 Cheap LED lights are less spiky, but the spectrum is still missing some areas. Even though this light might balance out as a warm white, it is not providing light across the whole spectrum. Anything cyanish will look darker and less saturated under this LED: 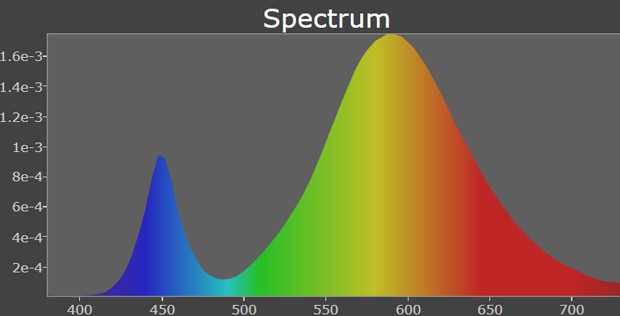 What this means for video is that some cheap lights are very difficult to grade. Skin tones will go from looking sunburnt to jaundiced with no happy medium. Some things will pop, while others will be undersaturated. The price of cheaper lights will be the cost of extra time spent making it look good.

Tungsten (hot filament / incandescent) lights however, even cheap ones have a very smooth spectrum. This is a standard household incandescent bulb. Although this light is very orange, it is probably possible to get an acceptable grade by adjusting the colour temperature in-camera: 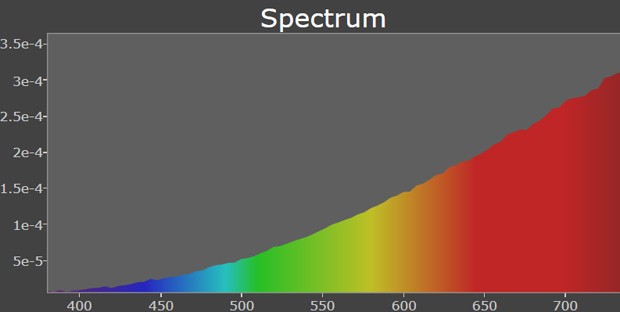 Halogen lights have an even better spectrum, with more light in the blue end. You can get halogen work lights that would do quite well as film lights with a bit of diffusion. They do however run hot as a lot of the energy they use is turned into heat. They have a smaller up-front cost, but cost more in terms of power usage and replacement bulbs, and because they use ten times the power you can't run them off batteries, like you can with LEDs.

Of course, for the average youTube face-to-camera type video the colour fidelity of the lights may not be such a problem, especially if you're reusing the same setup again and again - you can get the colour grade right using your tool of choice (most NLEs have pretty good colour grading tools built-in these days) and then keep the settings from one video to the next.

Read the article that goes with those graphs here, though it's talking about lighting for household illumination, not for video.

I think the answer to your question just comes down to math; the LED lights are cheaper per lumen.

But I want to share my inexpensive lighting setup, in case it may inspire you. I use long fluorescent tubes, mounted in cheap metal light "hoods". My setup has 4 tubes in 2 hoods (2 tubes per hood), positioned in parallel a few inches apart. Each tube outputs 2900 lumens. Since the light tubes are long, and there are 4 in parallel, they give a nice soft light. You don't need a softbox. I use daylight colored bulbs (5000-5500k) because video cameras love that color.