Tagging each player's touches in a soccer game

I'm a soccer coach and I'm always looking for ways to help my players improve. For example, we record all of our games so the players can watch them afterwards. However, I find it to be an inefficient use of time for a player to watch the entire game if they only touch the ball 17 times, for example.

My question: is there a way for me to tag every time each player touches the ball? Then when a player reviews the video, after I finish this editing run, they can pull up the 17 times that I've tagged them? I'm open to using whatever software and process would best meet my need.

Thank you in advance for any help you can provide!

My solution here is time- and labor- intensive, but it will work. I'm tailoring it for Adobe Premiere, since that's what I use, but any multi-track editing software should be able to handle this.

The person editing the video brings the footage of the game (which I'll call the "main video") into the timeline. Then the editor adds a new video track for each player who was in the game.

The editor watches the video of the game (the "main video"), and each time a particular player touches the ball, the editor 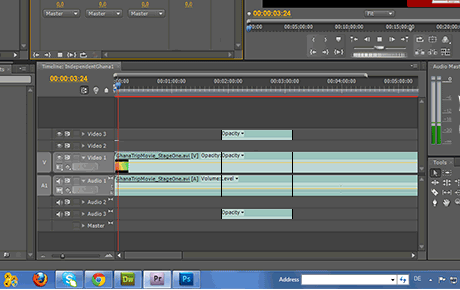 If two players are touching the ball simultaneously for some reason, the clip gets pasted into both their timelines.

After the whole main video has been "distributed" this way, there will be big gaps between the clips in each players' timeline. The editor now removes the gaps from each timeline.

This whole process is somewhat tedious, but it will work. I'll be interested to read other people's ideas!

hey i maybe came up with a better solution : upload it to youtube and provide your players with the timesatmps in the description this way they can click on it and see their stuff

2
Annotating sports video: design principles?
6
Sync separate audio to video+bad-camera-audio, free NLE recommendations
0
Split subtitles to line up ends of files?
3
Creating a one-off non-pro video to document a project - what software would be sensible?
3
How to remove background from video without using green screen
0
avisynth(+) + avslib - cropping each frame with different values
0
Software to Trim a Video into Multiple Files
1
CyberLink PowerDirector: Is it good for game footage?