How do I apply effects to a layer at its current resolution (scaled up by the layer's scale property) instead of its original resolution?

I'm a sprite animator in Adobe After Effects.

For example, I want to be able to skew a layer, but because this image is very small on its own, when I scale up its scale property and then skew it using one of a few possible effects, it does the skew based on its original resolution, meaning the pixels trying to show the skew are very large.

The only way I know of to do this is to use the transform property, and to scale it up that way, then use its scaling property. Trouble is that this means that the bounds of the layer are much smaller than the visible portion, and it means I have to screw with anchors and positions again to get everything back to normal, which is very tedious.

I basically want to be able to skew just like in Flash. Is there any way to do it that is much quicker and smoother than the method I described? 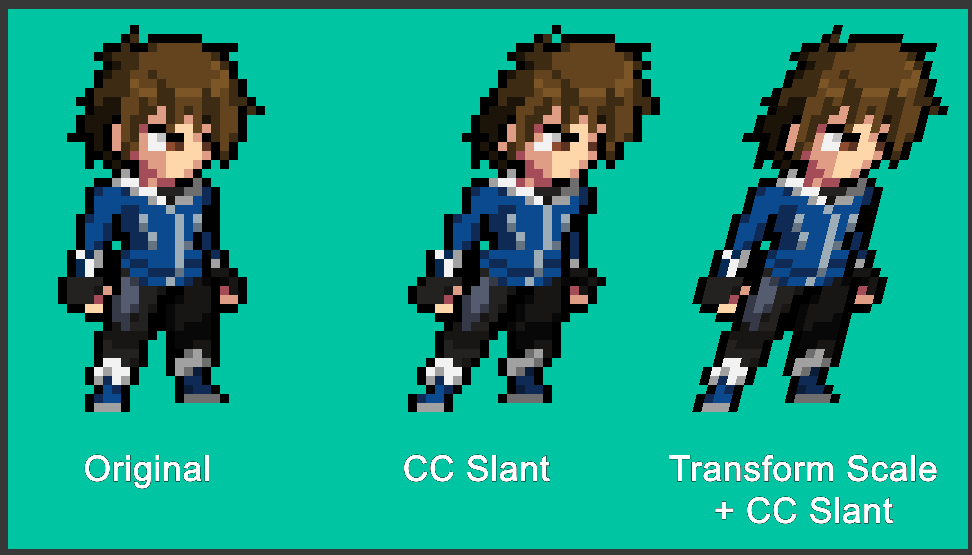 In the first and second sprite, it's scaled up by playing with the layer's scale property. On the third one, it's scaled up using the effect called "Transform", and then I use CC Slant to skew it. For a few reasons, this is tedious and a bit unwieldy, so is there a better way to do this without using Transform? I know I can do something similar by precomposing the sprite, but this is also unwieldy.

I should also mention that I only own AE CS5.

Well, the answer to the question in your title is to apply the CC Slant effect to an adjustment layer above your (scaled-up) sprite layer. The adjustment layer will have the same resolution as the comp.

But based on the description below the title, I'm not 100% confident this is what you want. Let me know.