I'm having a lot of trouble getting my audio to work properly in multi-camera sequences.

I have just two sources, both video with a single synced stereo track. The stereo tracks for each source have been split into two mono channels (each channel is a different mono microphone.)

After creating the multi-camera sequence "Dr Chen pt.1 Multi-Cam", everything seems fine. Everything is synchronized and each of the 4 audio tracks holds a different microphone recording.

But when I create a new target sequence from the multi-camera sequence (for editing) it seems that the first two audio tracks are identical and the last two are missing. Furthermore, the first two sound like the sum of all clips from the multi-camera sequence. But I've made sure each track in both sequences is mono and mapped to a different audio channel.

The audio channel mapping is confusing to me, but I don't know what I'm doing wrong. Any ideas?

Here are screenshots of the audio channel mapping for the multi-cam sequence and the target sequence. 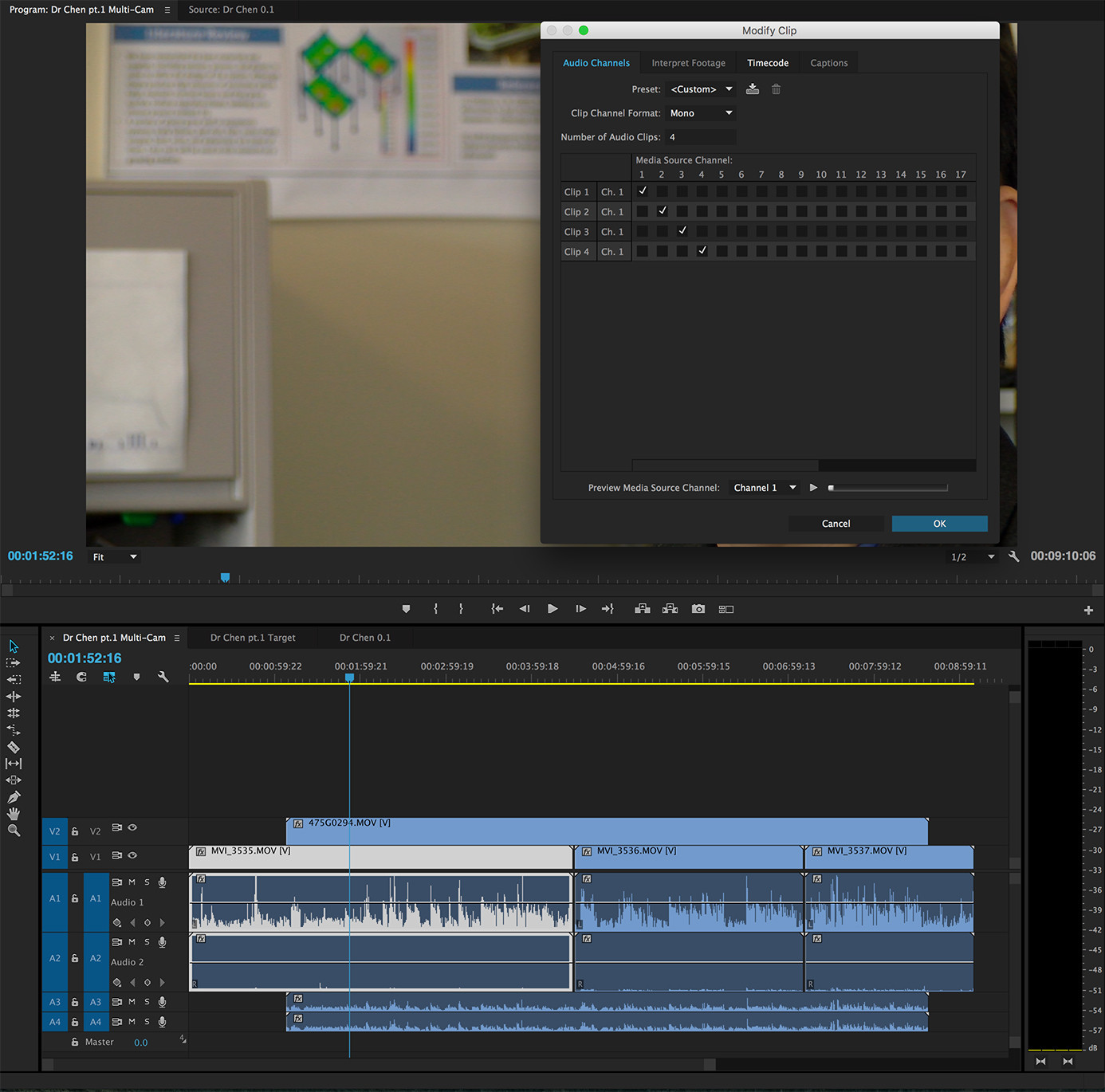 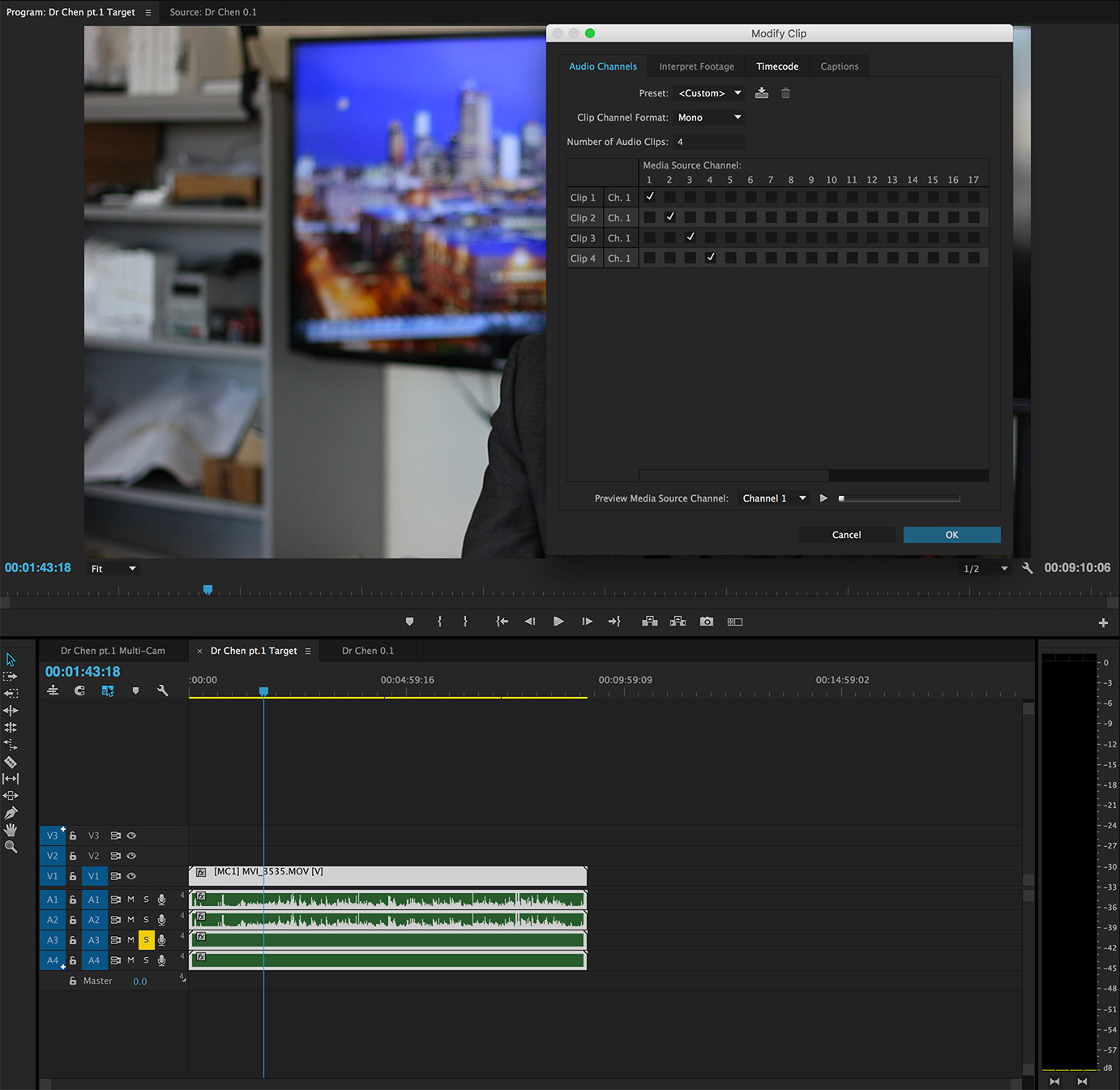 Premiere Pro is definitely not a digital audio workstation. Its treatment of audio is primitive at best. I believe its paradigm (which I think is screwy, but that's my opinion) is that a multicam clip conveys one of two types of audio: the preview channel track (which you have selected as Channel 1) or audio-follows-video, which means each cut you make, the audio switches to the one channel allocated for that clip.

I know you don't want either, but I don't think there's a third way.

So, use Channel 1 as your reference clip, copy and align the audio tracks you want to deal with to the sequence containing the multicam clip, and do all your audio edit processing there, separately from your camera changes. Good luck!

I'm not 100% sure how you are getting waveforms for the 2nd audio track in your main sequence (last picture) because mine only gives me the first audio track (A1). This is a quirk or perhaps a bug that annoys me to a great extent. I can say however, that there should be no summation of audio A2-A4 on A1.

From a troubleshooting perspective, I would probably first try render and replacing each of the audio tracks (first unlink them) to see if that elevates the summation problem, as it would remove audio mapping as a potential problem ensuring that in the multicam sequence you have the mics separated.

However, the potential issue with this is that you will still have no waveforms for A2-A4 in your main comp, and you would only have A1 unless you are using 'audio follows video' which I don't think that's what you want as you seemingly want to mix the tracks.

At this point I think you are left with the option of roundtripping your audio mixing to audition; doing you're entire mix for the interview (?) there and then bringing it back into Premiere as A1 on your multi-cam whilst eliminating the (now) extraneous audio files.

This is probably less than ideal if you plan on taking on bits and pieces from the interview as you would be doing work mixing audio for something that won't even be used but it is nevertheless and option.

You could make some cursory edits in the multi-cam sequence and then work on the audio to help alleviate the burden of extra work.

Not the answer you're looking for? Browse other questions tagged premiere audio multi-camera or ask your own question.

2
Best way to get synced audio from multi-cam Premiere project into Audition and back
2
Is automatic switching of audio stereo balance while cutting between camera angles possible?
4
Awful Audio in Video post-render (Premiere Pro CC)
1
Synchronise in Premier Pro
2
How to do picture in picture with Premier Pro Multicamera
0
FCP loses second audio track on import