How to stop Sony AVC/MVC encoder from adding 4:3 aspect ratio to 16:9 videos?

I am creating a project based on mp4 files recorded on my Sony Alpha camera. These files have pixel resolution 1440x1080 and aspect ratio 16:9, which means that they are anamorphic (pixel aspect 1.333) and are stretched to 1920x1080 when playing back. All the video players I tried are playing the files with correct aspect ratio. Mediainfo tool shows the following information:

When creating the project, I specify that I want to detect project settings from an existing file and I pick the file from the camera.

When rendering the movie, I pick Sony AVC/MVC encoder and specify the settings as in the original videos (1440x1080@30p, 1.333 pixel ratio for anamorphic aspect ratio, 25 FPS): 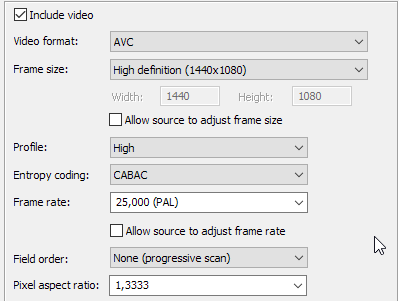 But the final rendered movie plays back with black bars and 4:3 aspect ratio on some video players! When I inspect the media information, I see the following:

In project properties, set your pixel aspect ratio to 1.333 as well. Furthermore, make sure that when you right-click a video on your timeline that both resample is disabled, and try fiddling around with the "maintain aspect ratio" option. I have a hunch that it has got to do with these settings.

Try using different formats/encoders as well to see what effect that gives.

Not the answer you're looking for? Browse other questions tagged encoding vegas-pro aspect or ask your own question.

2
Sony Vegas 10 Video made from smaller quicktime mov videos look crap on youtube
5
Upload a video to Youtube without losing contrast
3
Lightworks detects aspect ratio incorrectly and clips video from ShadowPlay
2
Modify video file for viewing in generic media player
0
How to make rendering loop selections work in Movie Studio Platinum 13?
1
How do I convert anamorphic hdv video to normal h.264 video with ffmpeg? How to ensure square pixels in output?
1
How to convert a 2:21:1 video to 16:9 DVD using ffmpeg?
1
Sony Vegas Pro 12 - 4/3 video wrongly considered as 16/9
1
What's wrong with this MP4 file? Is the pixel aspect ratio wrong?