I recently borrowed a Sony DCR-TRV140E (which stores footage on the Digital8 medium) from a church in order to shoot my friend's wedding that took place there. By the looks of things, the camera had not been used for a while prior to this. When I set it up to capture into Final Cut, the preview window within FC and the LCD display on the camcorder both showed the footage, but with equally spaced grey bars, as shown below. 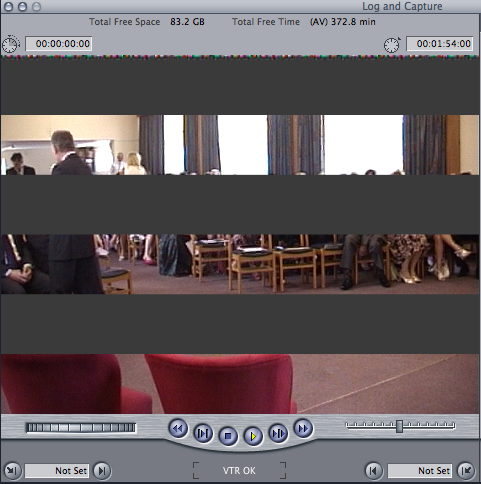 This being the tell-tale sign of dirty heads, I subsequently bought this head cleaner, and put it in the camcorder bay, and attempted to run it as instructed. The camcorder refused to play it, and the 'eject' symbol flashed on the LCD. When I tried to eject it, the cleaner proved difficult to remove from the bay.

I then left the camcorder for a while to rest, and attempted the same thing about 90 mins later. After I had the same experience, I inserted the original footage tape back into the bay, and attempted to play that, and the unit refused to display footage, displaying only the blue screen. After leaving it to rest again, I reinserted the footage tape, and now this causes the camcorder to beep and flash the eject symbol also.

My question is, is there anything I can do to either make the camcorder recognise the tape again, and make it play (and therefore capture) properly? I have consulted the manual for this type of problem, (with it only helpfully stating that the tape is recorded in Hi8/8mm analogue system as it's solution) but to no avail.

The only thing I can think of is that the head cleaner, even though it was advertised to work with Digital 8 systems, was not in fact compatible and has damaged an internal component.

Any suggestions would be much appreciated, thank you for your time.

Ok, so it turns out that after a large amount of research into error codes, the Error: e:31:23 means that there is a problem with the right hand side tape reel cog. It appears that the cog cannot move the spool, as it clicks a bit before displaying the error when I insert a tape. I think this can only be fixed by a specialist, but I included this answer to give someone in the same situation a resolution.

Not the answer you're looking for? Browse other questions tagged playback camcorder or ask your own question.