Best workflow for working with mattes in After Effects

I love working with alpha / luma mattes in After Effects.

Creating that kind of composition should be a piece of cake, but it is incredibly difficult because there is no real good way to work with mattes in After Effects (CS6 here); while it's one of the most important feature in a compositing software.

I would be glad to know how you work with them and what workarounds you know.

Track mattes is the best way to work with mattes; but what if you need to use the same matte on several layers ?

You end up duplicating your matte, which multiplies the number of layers in your composition, and is a good way to bring problems since you have to keep your layers "synced" : if you have animation keys on a layer matte, you'll need to copy/paste them on the cloned layer every time you change something, unless you parent them or use complex expressions to do the job for you, which bring other problems.

The Set Matte (native) plugin is really cool about this; since it allows you to use a unique layer as matte anywhere in your comp.

There is also the bs-Smart Set Matte plugin (from BS_CompositingBundle 2), which has some advanced options: you'll be able to stack several mattes and to choose how they are composited, which is really, really nice; and to select the mode to use for the matte (alpha, luminance, lightness, etc); among other options, but you'll have to pay for it (~30$). 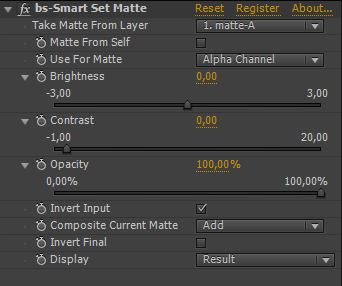 But the problems with both plugins are that : 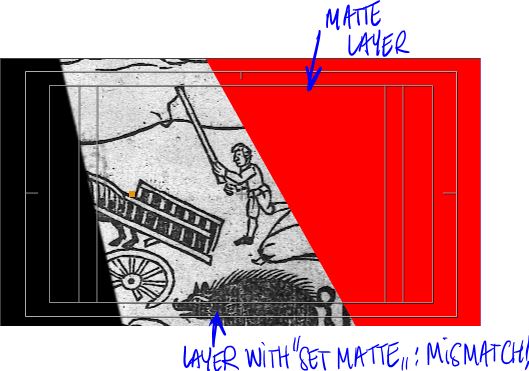 I'm sure I'm not the only person facing those problems.

What I would dream of is a set matte effect which would have advanced options as bs-Smart Set Matte has, and above all an ignore transformations option, avoiding the offsets issue described above.

Browse other questions tagged after-effects plugins compositing or ask your own question.

5
Footprint or breadcrumb animation
1
Working with Premiere and After Effects
2
Working in a linearized Color Space in After Effects causes hard gradients
1
Collapse Transformation and Layer Styles (bug)
2
Adding AO render pass in After Effects
1
How to change the font and color on multiple keyframes at once | Adobe After Effects
1
Need help finding plugins/techniques to recreate my magic system in After Effects
1
After Effects, text layers and depth of field
2
After effects workflow for several similar clips