So I have some experience with live production, but I want to do something a bit more complex and need some things cleared.

I have used BMD ATEM plenty of times, but this seems to be over ATEMs capabilities (or am I wrong?).

I imagine there is some sort of switcher like ATEM, but with the ability to prepare layouts composed of multiple sources and graphics via some companion PC/mac software. To this switcher, camera sources would be connected via HDMI or SDI, and screengrab sources via some sort of HDMI splitter (between PC and it's display). This switcher would allow for switching between layouts and inside those layouts. It would also allow for switching between different graphics. Imagine there is small space for a sponsor banner and it would switch between three banners of different sponsors. Or there is point counter displaying one of multiple PNGs with a number.

Entire thing would then go from switcher to some encoder/streamer (like wirecast?) that would stream it to let's say YouTube.

To lower number of inputs needed on the main "super switcher", it would be possible to route 3 cameras to secondary switcher like simple ATEM and route that as single source to the main switcher, since signal from those cameras would be used only in one layout and only linear edited (no PIP).

Thank you very much!

Investigate some of the software switcher products such as "V-Mix". Or some of the computer-based integrated products like NewTek "TriCaster". They will handle many more inputs than even the large (and expensive) hardware switchers like BMD ATEM, etc. The more expensive models likely handle quite a large number of PIP images to be combined. Of course, you must have enough compatible video input ports on the computer to capture all those cameras (or whatever). But they can typically handle live inputs from many computers directly over the LAN, so that would be a big advantage for your requirement.

And many (most?) of those products also handle concurrent recording and streaming all in one solution.

You could also get very expensive hardware to do the same eg. from Blackmagic Design, I would however look at the software option, with some inexpensive computers.

Computer One One computer for camera input, depending on how the video is being delivered, I'd get either small pc or a tower. If it doesn't need additional cards in it, I'd go for a HP Micro. They can often be found very cheap to order. If you need capture cards (ex. Intensity Pro 4K (which I use to capture PC/XBox/PS4 and cameras via HDMI), any cheap Tower from HP or Dell will do.

A HP Micro can handle one capture card internally and several via USB, which is a reliable option as well.

Then either setup Open Broadcaster Software on that computer to handle Camera Switching, or setup Multicast servers to export the feeds (intakes).

Computer Two Live Editing computer, can be almost any type of computer, preferably one with a video encoder card. Setup OBS and catch the feeds from computer one, choosing/switching is easy, also add graphics etc. on fly.

Then, either with the in-built encoder in OBS, or using a encoder card (OBS have support for encoder cards) to stream back computer one, or a computer three, or directly to a streaming service.

Since computer one already can handle streaming via multicast, it could receive the encoded video from computer two and pass it on to a streaming service. 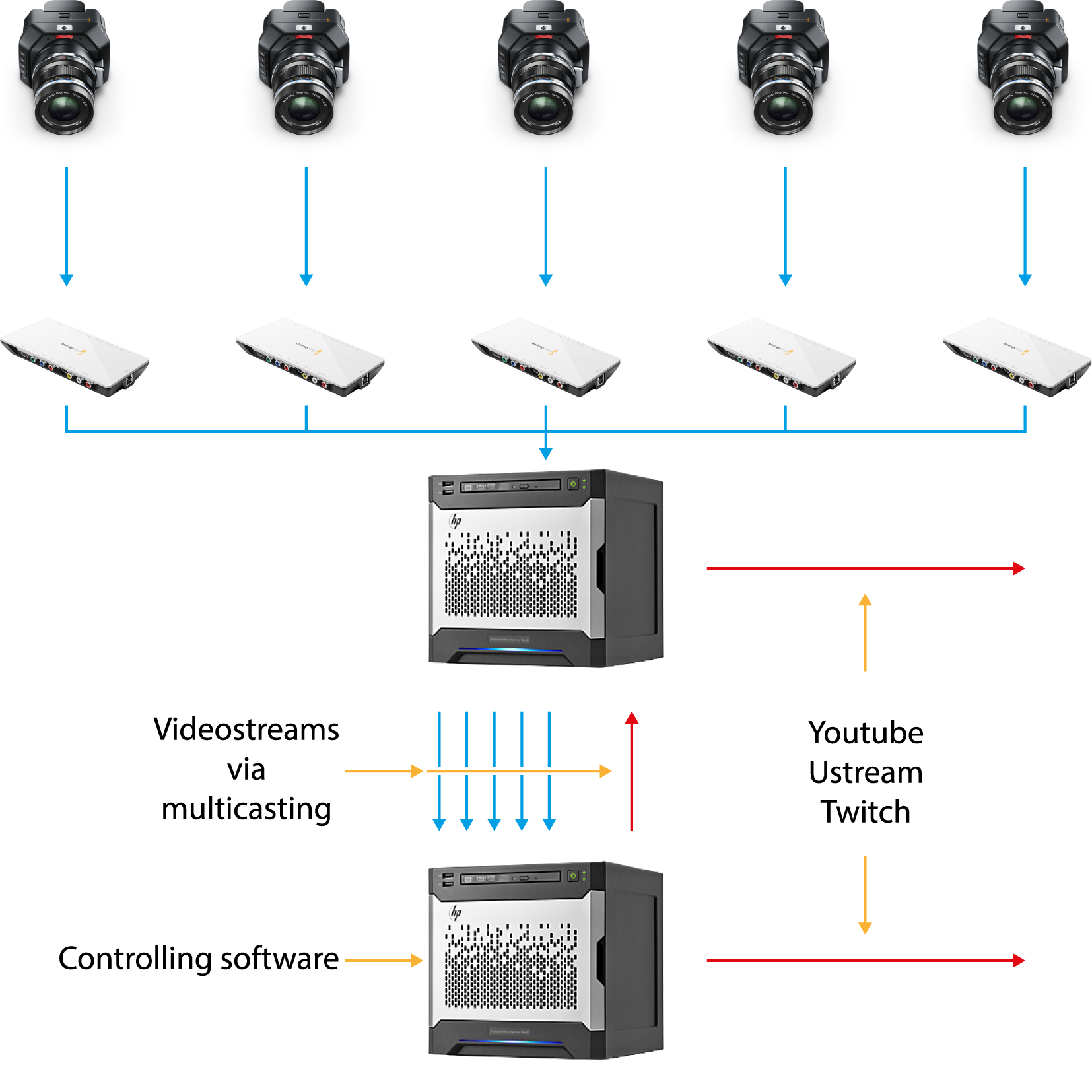 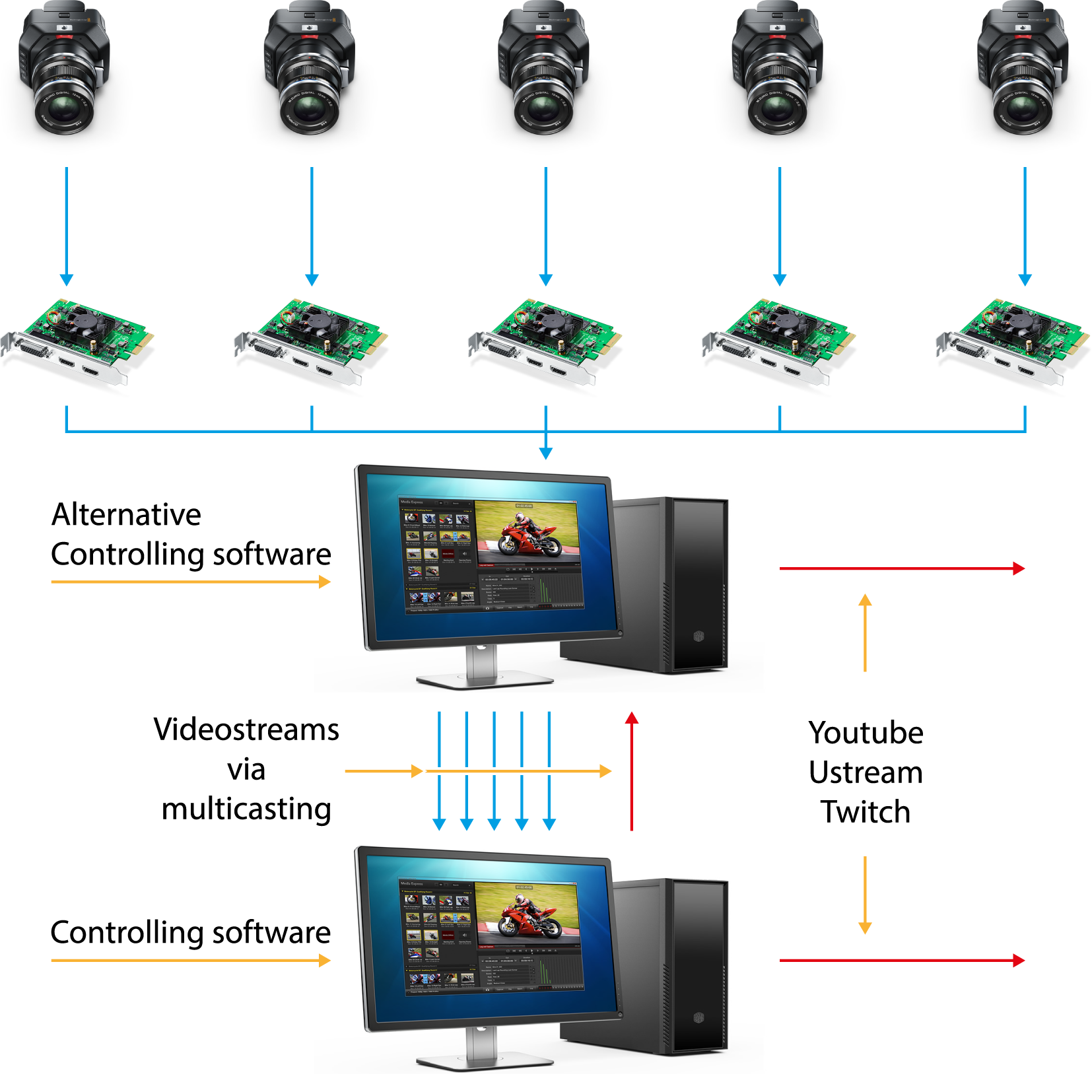 For more control, control software can be installed on computer one, to minimize camera output to computer two.

You could do all of this with Wirecast. It will allow you to create any number of overlays and switch between them. You could also try out OBS first since its free. I would use the ATEM for the camera switching, then do all of the overlays with software.

Check out TVone Media Solutions Corio line of Video Scalers. These are available with many different types of video inputs. They can scale all inputs independently, mix and overlay each onto the other, add backgrounds, titles, etc. and are computer controlled, as well as from front panel switches.

I have used these in the past to do pretty much the same thing you are describing.

Not the answer you're looking for? Browse other questions tagged streaming hardware live recommendation broadcasting or ask your own question.

1
Native SDI-output vs HDMI-SDI adapter for live stream
1
Hardware solution for live video conversion
1
Live video and sound recording (NOT from a security camera) sent to a remote server
3
How does media manage to co-host a show from two continents without latency?
2
Blackmagic setup: How do I record all cameras in a multicam broadcast?
6
One long continuous shot, sped-up until it becomes “live”
1
Compact Camera for nighttime live streaming?
1
Schedule a live stream of a pre-recorded video