How to speed up/slow down audio along with video?

I just finished watching this nice little YouTube tutorial that gives one a bit more control on speeding up or slowing down PARTS of video (as opposed to just slowing down the whole thing) using time remapping, markers (splitting markers), etc. All really quite handy and gives more control. Caveat is that I can't figure out how to make it apply the slow-down/speed-up to the audio as well. If I don't use markers and time remapping and just do the right-click and select speed/duration that will apply it to the whole video... and audio. But that is not what I want.

I have a Subclip in my Timeline Monitor. It comes with Video Track and Audio Track: 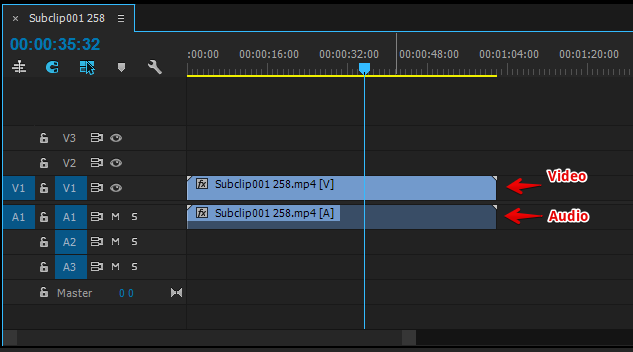 When I speed up a SEGMENT of my video using "add/remove keyframe" in "Time Remapping>Speed" Effect Controls, it changes the duration of the video but not audio. So I end up with this: 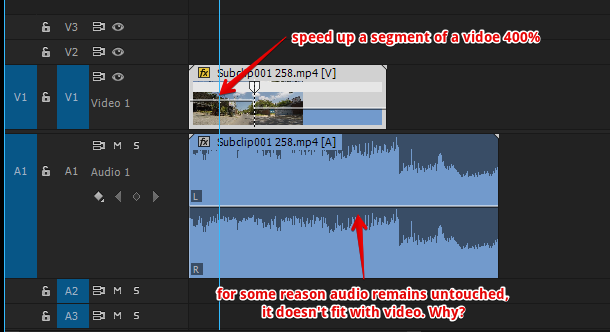 And I want the audio changes its speed along with the video. I speed up/speed down video, so the audio do the same. The best example of how an audio should fit with a video is to run a video in MPC-HC (Media Player Classic) and speed it up or down by Ctrl + arrow-up/ Ctrl + arrow-down. I want to achieve the same effect in Adobe PP CC.

Is there a way that I can use time remapping on video and have the audio remapped in sync with the video? Or is there some other way to do it? Any pointers would be appreciated.

Unfortunately, kazanaki's answer is your only choice.

There are multiple ways to change the speed of a clip in premiere, namely:

The first two do the same thing, that is change the speed of an entire clip by a constant amount. They are also intertwined, so if you change the speed and duration of a clip using the Rate Stretch Tool, the new values will also appear in the Speed/Duration panel.

Time remapping works differently from those tools, as it allows for speed changes over time. That is, you can set keyframes for 400%, 200% and 100% speed (as in your example) and Premiere will interpolate between those keyframes, creating a smooth speed transition. However, this has no effect on the audio stream of the clip. From the documentation:

When you vary the speed of a clip with linked audio and video, the audio remains linked to the video, but remains at 100% speed. The audio does not remain synchronized with the video.

I don't know if there is a reason why Adobe has designed it this way (I assume there are technical reasons for this), but at the moment there is no way to adjust audio speed alongside a video using time remapping.

If this behaviour bothers you, you can always write up a Feature Request for Adobe to consider for future releases of the software.

An alternative would be to cut your audio in Adobe Audition and use a Dynamic Link to import it back into your Premiere Pro projekt. If I recall correctly, adjusting the audio alongside the video as described above is also possible in After Effects, but don't quote me on that ...

Unless I am missing something, I think you are making things overcomplicated.

Then right-click on each part and select speed-duration and change to the value you want. Make sure you select the checkbox - "also change sound pitch" (don't remember exactly the text)

The audio will be resized along with the video.

2
Batch-importing images in sync with audio/markers
2
How to time-remap with Twixtor in Adobe Premiere?
1
How to get a higher FPS without changing speed video through Adobe After Effects or Premiere Pro CC2014 letting the software create the missing images
2
Premiere Pro CC - Creating an interview video with multiple camera angles
2
How can I sync audio in Premiere with a comp in After Effects?
0
Adobe Premiere CC 2017 - decelerate video and audio (without excess of bass sound)?
2
Create video from a series of single frames and use original audio
1
Premiere Pro: How to sync speed ramped audio with video from linked After Effects comp?