What are the main limitations on using the following setup to boost frames per second capturing?

Suppose I have two identical cameras, a red camera and a blue camera, that can both shoot videos at 1000 frames per second. If I set them up in the following set up, using a half-silvered mirror to capture the object highlighted in green, could I not technically achieve 2000 frames per second by simply overlapping the two sets of data I get from the red and the blue cameras? (e.g., take the first frame from the red camera, the second frame from the blue camera, and so on?) In effect I could double the frames per second of any camera with correct timing with the following set-up, though I've personally never touched a camera so I don't know the limitations that cameras could impose on realizing this dream of mine. I'm not too sure if this is off-topic either, sorry if it is. 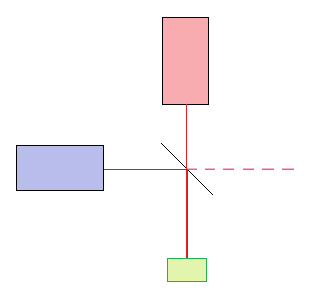 Not the answer you're looking for? Browse other questions tagged framerate or ask your own question.

5
Low cost DIY high-speed video camera
1
Does Vegas allow for rendering in frame rate different than source frame rate?
0
Fast pans and motion seem to strobe or stutter, why?
2
Is this video 50p or 25p?
0
Why are there missing frames in the Vegas Pro editing timeline?