I was recently given a 27-year-old VHS tape to transfer.

Is it true that an old tape will "fuse" at the ends? What do you think has happened here? While the stretched part is probably destroyed, I wonder if the bit ahead of it is salvageable, by a professional service or me.

Thanks for your advice! 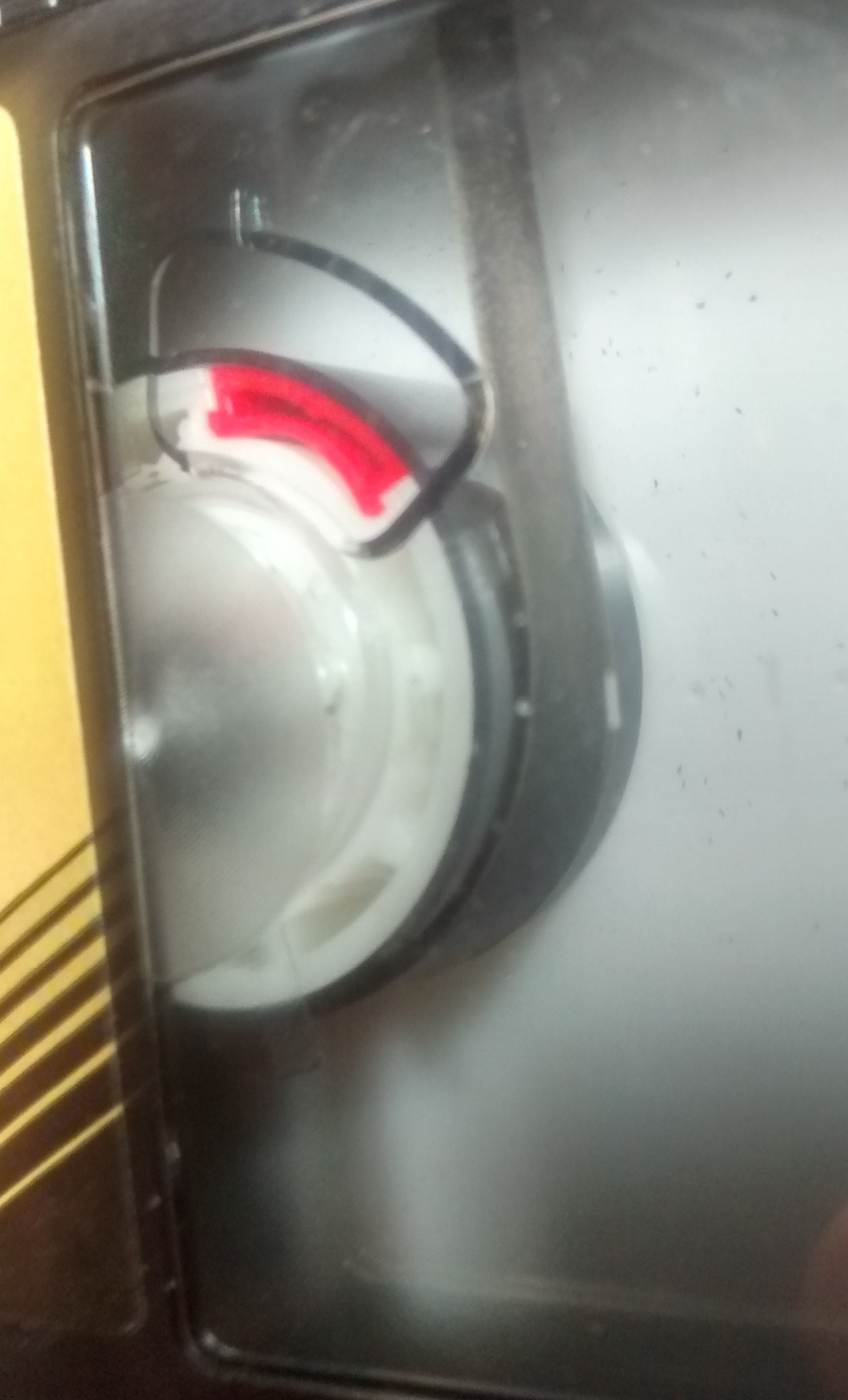 27-years old?! Forget it. Tapes need to be regularly forwarded and rewound, fully, for them not to stick. If that tape of yours remained unused for so many years, it might be too late. Talk to a transfer pro... but don't expect miracles.

It could be overtightened, some cheap VCRs tend to brake badly when spooling, this can apply undue tension on the reel. You actually can dismantle a tape cassette (to fix twists etc.) and pull the spools out.

As long as you don't mind loosing it altogether (which you have anyway). Remember to place all the little capstans (silver guides) and springs back in the same place later. You could probably gently loosen the stuck spool with your hand, Try to wear lint free gloves though as you don't want to apply skin oil to the tape. Be very careful not to damage the edges of th tape.

As other answers have suggested, you're probably wasting your time. The tape is likely stuck to itself and will be damaged if you pull it apart, but maybe something can be done. Since you have effectively lost that part of the tape, and you've already transferred what you can, there is nothing left to lose.

I would open the cassette very carefully as 3pointedit suggested, and try to unravel the tape from the spool. Make sure you wear gloves. If you can get it to unwind, I would use some spent tape from an old VHS that you don't care about and lengthen this tape with it. Basically, cut a foot from the junk tape and tape it on to the end of the tape you want to transfer. There used to be a special tape you could get for this task (called splicing), but you'll probably just have to settle for ultra clear scotch tape. It just has to work once. You might still lose the first few seconds and get distortion at the splice point, but that's better than nothing.

Source: I used to fiddle with audio cassette tapes in my father's recording studio when I was a kid. It's the same principle, just a different sized tape and cassette.

Not the answer you're looking for? Browse other questions tagged vhs videotape or ask your own question.

2
How to play/back-up PAL/SECAM VHS tapes?
3
VHS tape has one "cog" blocked off - can't play it
2
A question about VHS and SVHS
4
How can you fix color banding from VHS video tape in post-processing?
7
Digitize a VHS tape with FFmpeg and get a live preview
3
Vhs capture: 720x576 or less?
0
Is a UK PAL video tape compatible with a continental Europe PAL VHS/S-VHS player in terms of video and sound
0
Camcorder Tape Capture
1
Authentic VHS tape effect in Premiere Pro