So I'm trying to recreate an effect that was used quite a bit in the first Hulk movie. I've seen it other places, but Hulk sticks in my mind.

So the concept is that there are two cameras, one recording a relatively wide angle, capturing two subjects and a bit of background, and another camera recording a closer crop of one subject. 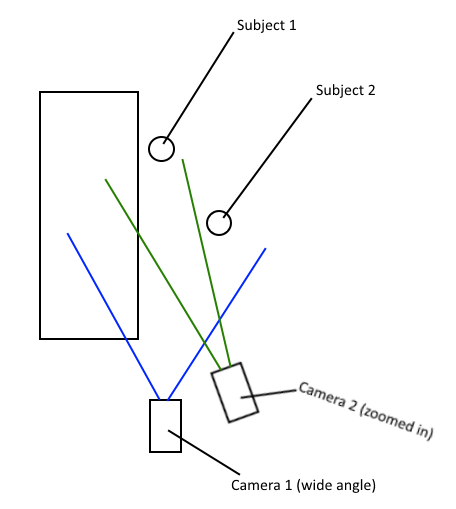 This is a common setup, but what I'm focusing on is the transition between these two cameras. Normally, something as simple as a dissolve is used, but I've also seen a transition which looks like a fast zoom, but is actually a transition. This is what I'd like to know how to do.

If I can find an example, I'll edit this post. Thank you!

I wrote a FCP (version 7 or lower) plugin that did this as a transition effect. I can dig it out if you want it.

Not the answer you're looking for? Browse other questions tagged effects or ask your own question.

1
Screen recording 3d zoom
3
filming iridescent liquid or effect
0
Changing the effect of a certain object but not anything else
2
How to create a glitch effect
2
Creating a freeze frame type effect purely in post
0
Instructional video creation: "see-through glass" whiteboard effect
1
Appear and disappear effect with camera movement
1
How to zoom into a video inside of a mask?