repeat crossfade in a sequence of images

I am trying to animate a series of drawings. I have 10 drawings of 10 states of an object and I would like to have a crossfade between each states and this repeated for about 2 min back and forth.

I am using After effects and I have imported the image sequence, made a composition (30fps, 2 min long) changed the time remapping so each drawing is displayed during 15 frames (0.5 seconds).

My issue is that the change between drawings snaps and I need a crossfade between them. The other option I can think of to is create a composition with all the drawings and manualy create key images for opacity but this is going to be very long as it has to go on for 2 minutes.

Is there a way to crossfade each drawing into the next one in Affter effects?

There's always more than one way to do things in AE:

Import the drawings as separate source files, rather than as an image sequence (in the import dialog uncheck the image sequence checkbox). Once you've got all your images imported select them all and drag them into a new composition.

They will appear as a stack of layers with only the top layer visible, but don't fret. Next step is to trim them to the length you need. The easiest way to do this is to select them all and move the playhead to the last frame you want (frame 15 in your case) and hit alt/option] which is the shortcut for trimming the end of a layer.

Now right click one of the selected layers and from the contextual menu choose Keyframe Assistant > Sequence Layers…. To get a crossfade you need to check the overlap box, and use the Dissolve Front Layer transition (I have never been able to work out why you would ever use the Dissolve front and back layers option, because it means that halfway through both layers will be 50% transparent, meaning that the background will show through). You might have to go back and add extra frames to your layers to allow for the overlap, so if you want a 5 frame overlap on a 15 frame layer you'll need to make it 20 frames.

This is the built-in tool for doing exactly what you want to do.

Do what you're doing, but make sure that frame blending is turned on for your image sequences. It's the little filmstrip icon in the switches column (you may have to hit f4 to toggle the visibility. 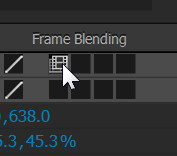 There are two values for frame blending, you want the first one, which is basically dissolving between frames — the second one does a kind of morph between successive frames which can do a good job in some circumstances, but can look very weird in others.

Now because frame blending is a bit computationally expensive, AE doesn't show it in the comp window by default. You'll have to turn it on to see it, and you do that by hitting the filmstrip button at the top of the layers area in your timeline:

Click it and it will go blue, and you'll see your frames blending.

Although this might be easier to set up, it does have the disadvantage that the frames are going to be constantly dissolving, with only one frame each where they are 100% from the individual drawing.

Not the answer you're looking for? Browse other questions tagged after-effects editing animation or ask your own question.