Is it possible to relight filmed footage with NUKE or After Effects?

I have a Video of a face that I filmed with soft lighting and almost no shadows. The camera is a static portrait shot. Now I want a spot light to move slowly around the head. Is something like this possible in NUKE or After Effects? 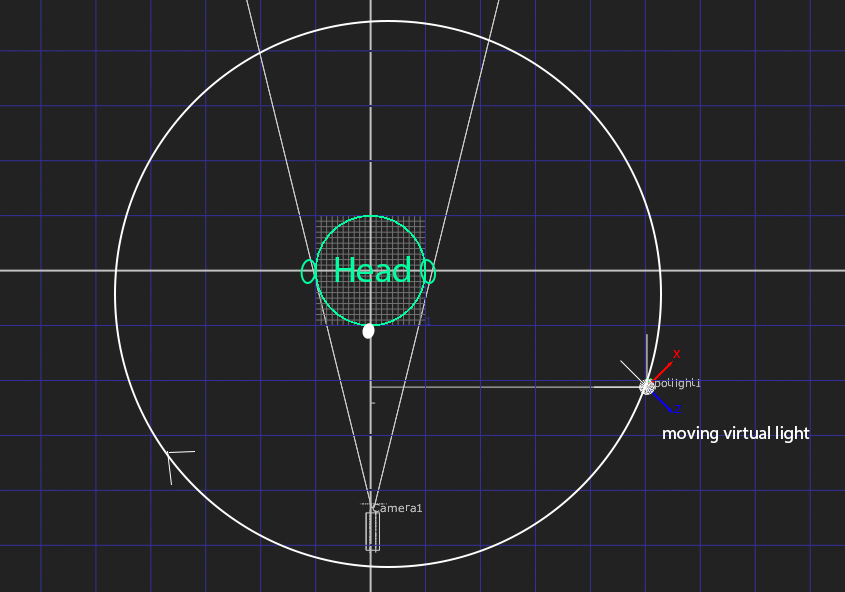 Note: Only the light should be done in post. The head should be real footage filmed by a static camera.

I suggest build a real lighting rig and maybe stabilizing her neck.

If you decide to do it afterwards you have to:

There are some obstacles:

Yes, it is possible in either, but the difficulty level is going to depend on how complete of an illusion you want.

The easiest effect is to simply setup a soft circle as an adjustment mask and apply an exposure increase to it. This will result in looking like there is extra light on the masked area of the shot. The problem is that it won't produce shadows or respect facial geometry, so it would look a bit more like shining a light on a painting.

You can compensate for this by roughly modeling the facial geometry and applying an actual light source in 3d in order to generate the brightening, but this would require modeling the face and matching the movements to those in the scene. Both Nuke and After Effects support calculating camera movements, but it is a complex thing to do, as is the modeling of the face and the animation of the face to fit the scene.

If you don't have weeks to dedicate to the task, it probably isn't worth bothering to try the more accurate version.

This is one of those things that is far, far more practical to handle in camera than it is in post.

Not the answer you're looking for? Browse other questions tagged after-effects nuke or ask your own question.

3
Footage feels "faster" when exporting from After Effects
3
Can I multiply 3D cards in a Nuke 3d scene on top of each other, like i can multiply layers in After Effects?
3
Nuke particles escaping bounce node with geometry input
3
Video noise and harsh shadows on green screen caused by feet
2
Is it possible to mask out unsharp areas of footage with After Effects?
0
Transparent Footage - After Effects
0
Good technique to superimpose face into moving character in AfterEffects?
2
After Effects - Green Screen - Subject Was Filmed Using Different Lens Than Background Image