I understand that 3D video works by showing two different perspectives of a scene to the eyes, separately, and the brain does the rest. Just like looking at a real life scene.

But for shooting 3D movies, I always assumed that they would just take the same picture, or perhaps a wider picture panned left and right for each eye. But I just saw something about shooting 3D being special.

Do movie makers shoot video from two different perspectives to create 3D movies? If not, what's special about it?

Sometimes yes, sometimes no. If it is shot "for 3d" then yes, they use either two cameras or a splitter to go through two optical assemblies to one camera. Here are some sample rigs that have actually been used in large films. 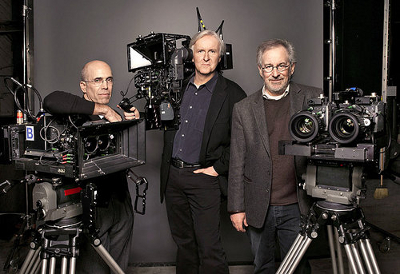 There are, however, a number of films that are released in 3d despite having not been shot "for 3d". In these cases, the films were shot on conventional cameras with only one lens. They are truly 2d, however, by the process of image analysis, effects artists go in and assign depths do different elements of the scenes. This depth data is then used to invent two perspectives to be used for making a 3d effect. It involves a lot of guess work and creating new content to fill in the gaps where actual footage doesn't have a given angle.

Some 3D TV's even have a basic level of this as an automated process where it will analyse the film in real-time and attempt to guess at depth information. The only difference is that the 3d extraction done professionally is an offline process with more time and effort spent to fine toon the end result and fill in some gaps by hand. The exact process and effort at each step depends on the individual project and budget, but the results are always sub-standard to actually shooting for 3D.

Not the answer you're looking for? Browse other questions tagged 3d or ask your own question.