I was working on a project in FCPX. Suddenly it crashed. After that the library on which I was working is not opening. Whenever I try to open it it crashes again. It was my 2 weeks of edit. How can I recover that lease help me ?? The error message I get is attached. 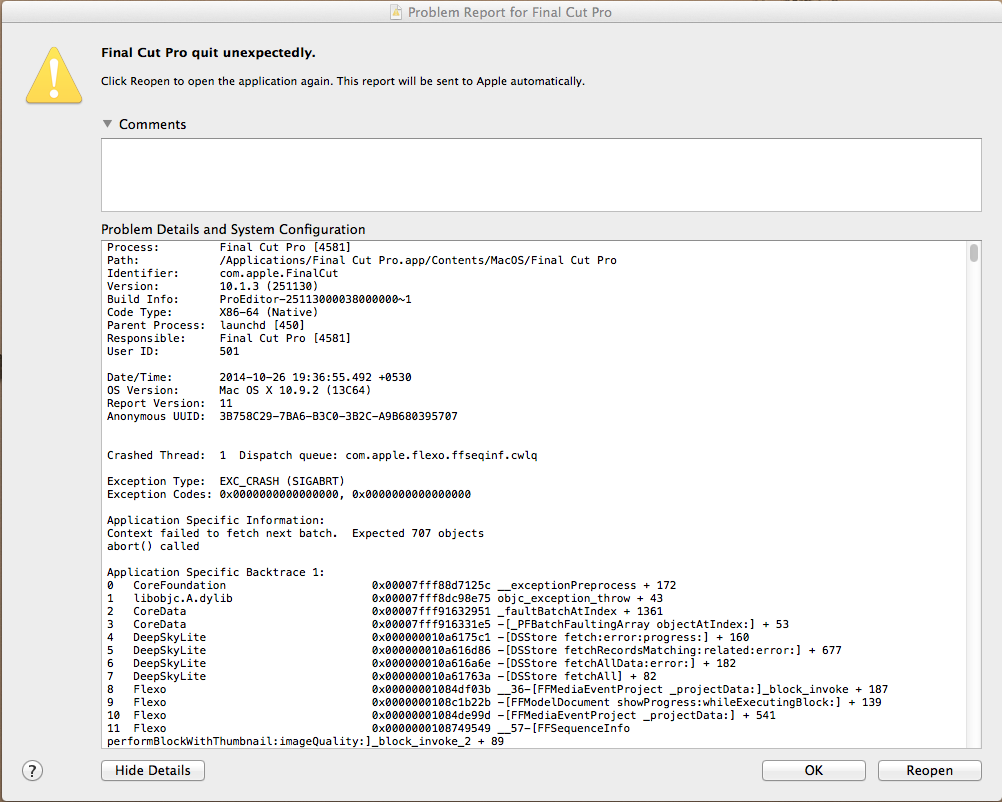 Hold down the option key while you open Final Cut in the Finder. This will open a dialogue which asks you to select a library. DO NOT select a library from the list. Instead, click the "new" button, name it "blank_Library" or something, select a destination, and click "OK". This process should start Final Cut cleanly. If FCPX has crashed at this point, then your problem is with the application itself, and you need to re-install. If everything's OK at this point, you might have a corrupt library.

Assuming that FCPX is running, now you'll want to try to open the project upon which you're currently working. Go to File->Open Library. You should see the library which contains your project in the list. Click it. If FCPX crashes on this step, you know there's a problem with the current library. If it doesn't crash, it could have been another open library which was corrupt and causing your crash. If everything works at this point, carry on with your day. If not, proceed to the next step.

Option-double-click to start FCPX again. From the dialogue, select the blank library that you created in the first step. Click "OK". Quit Final Cut. This will ensure that the next time you try to open the program, it won't try to open the corrupt library. Next, Spotlight search "Final Cut Backups". This folder contains backups of all of your projects. If the library which contained your project was called "Skateboarding_Kids", you'll see a folder called "Skateboarding_Kids". Open that. Within, is an iterative list of backups sorted by date. Open the most recent one. Did Final Cut crash? If not, carry on with your day. If so, repeat the steps in this paragraph, but open the next-oldest-to-the-last-backup-you-just-opened.

If none of this works, then my guess is that you're running a NAS or a SAN, and it's a network problem that's causing the crash, but I don't know enough about your system to say.

Not the answer you're looking for? Browse other questions tagged final-cut-pro-x or ask your own question.

1
What makes iMovie 11 crash when exporting a project?
5
FCPX => DaVinci Resolve => FCPX color grading round trip
3
color correction in fcpx
2
FCPX - Large MXF being broken into smaller files
2
Can FCPX work with vector graphics?
1
FCPX Continues to Crash on one project
1
FCPX: change export resolution and remove black bars
0
Edits to a Multicam Clip in Final Cut Pro do not Show Up in Timeline