How to force Adobe Media Encoder to use 100% CPU and memory?

On my machine, Adobe Media Encoder is very slow. It takes 12 hours to render 4 minutes of 1080p video for YouTube (the video is based on Adobe After Effects project with an original MOV file and four effects: curves, remove grain, unsharp mask and hue/saturation.

I noticed that it doesn't use all the memory available, nor does it try to use as much CPU as possible. Here's the actual usage during the encoding process: 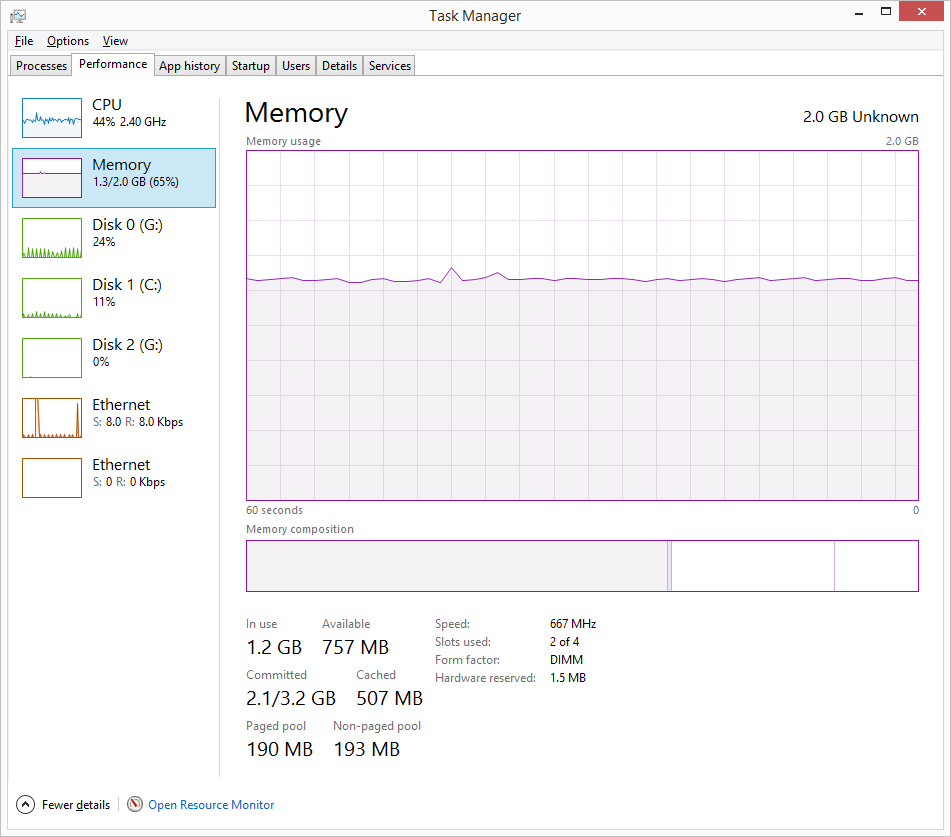 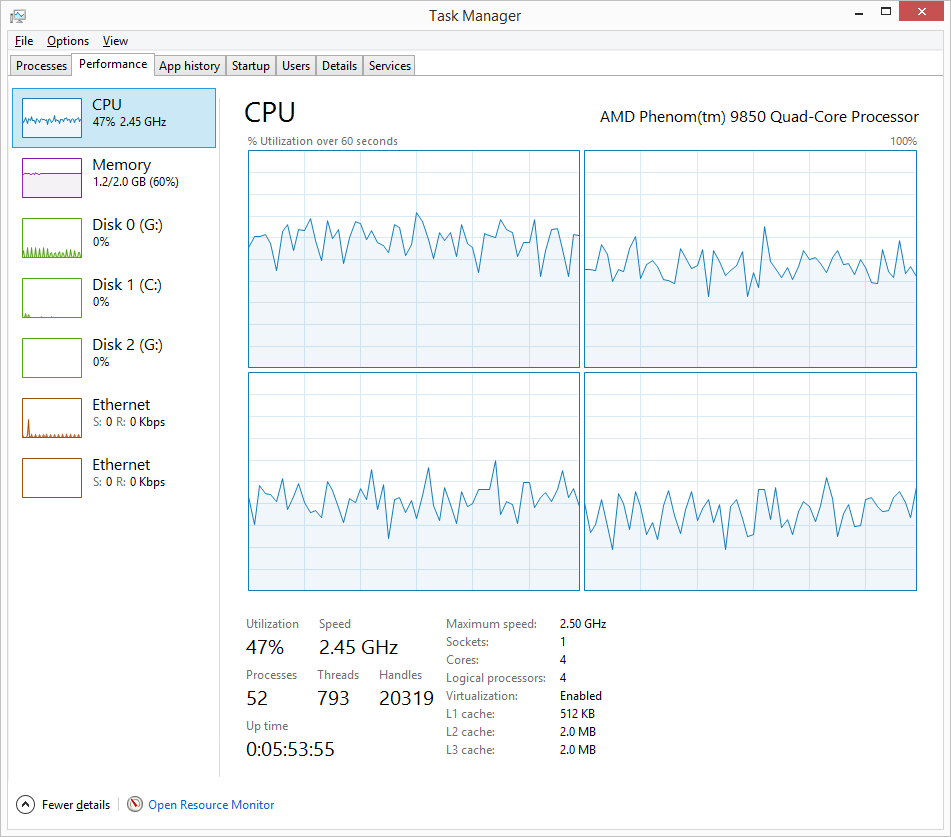 Is there a way to speed up the encoding process by convincing the application to use all CPU and all memory available?

As a side note, is it expected to be that slow? I can't possibly imagine movie making companies using it to encode a movie which usually is slightly longer than 4 minutes and has slightly more than four basic effects, even with a whole data center. Removing "remove grain" effect speeds up the encoding from 12 hours to 3:30.

There might not be a way. Based on your description of the problem, it sounds like the processing is the slow part. While the video encoder itself is able to do multi-threaded processing, the image processing you are doing may not be able to. By default, Premiere has always done as much parallel processing as possible for me and I frequently see it hit 99% CPU usage on my hyper-threaded quad core desktop.

The problem is most likely that some of your effects require the result of the previous frame to begin processing on the next frame. If this is the case, there isn't an easy way to break it down across multiple threads and that would make it impossible to hit 100% CPU usage on a multi-core computer.

A further improvement can be found in purpose built hardware. There are professional cards designed specifically for processing video and provide real time processing and encoding of video. These are often included in high end professional video editing workstations, but the price can be quite high. It isn't unheard of for a professional video editing workstation to be able to get up in the $15,000 to $20,000 range or even higher, just for hardware. They can go for a lot less if you don't mind waiting for renders (I work on a $2,350 system for my video work) but they can also get very high.

I'm not happy when I'm rendering unless I can actually smell burning plastic, nothing is more frustrating than AE telling you that your render won't complete until the heat death of the universe, while at the same time your CPU is barely raising a sweat. However there is something you can do about it.

After effects comes with a command line renderer called aerender.exe plain ol' aerender on mac). It's in the AE program folder. Using it is a bit challenging for people unused to the -=awesome -=power of the command line, but it is definitely worth doing if you're doing some heavy lifting in After Effects, and you want to be able to harness all the power of your machine.

The beauty of it is that you can run as many instances as you like. What I normally do is keep adding instances until I start running low on memory. I have a 40 physical core machine and it takes a lot to max out the CPU but here's a screenshot where I finally managed it. Each one of those windows is a new instance of the AE render engine: 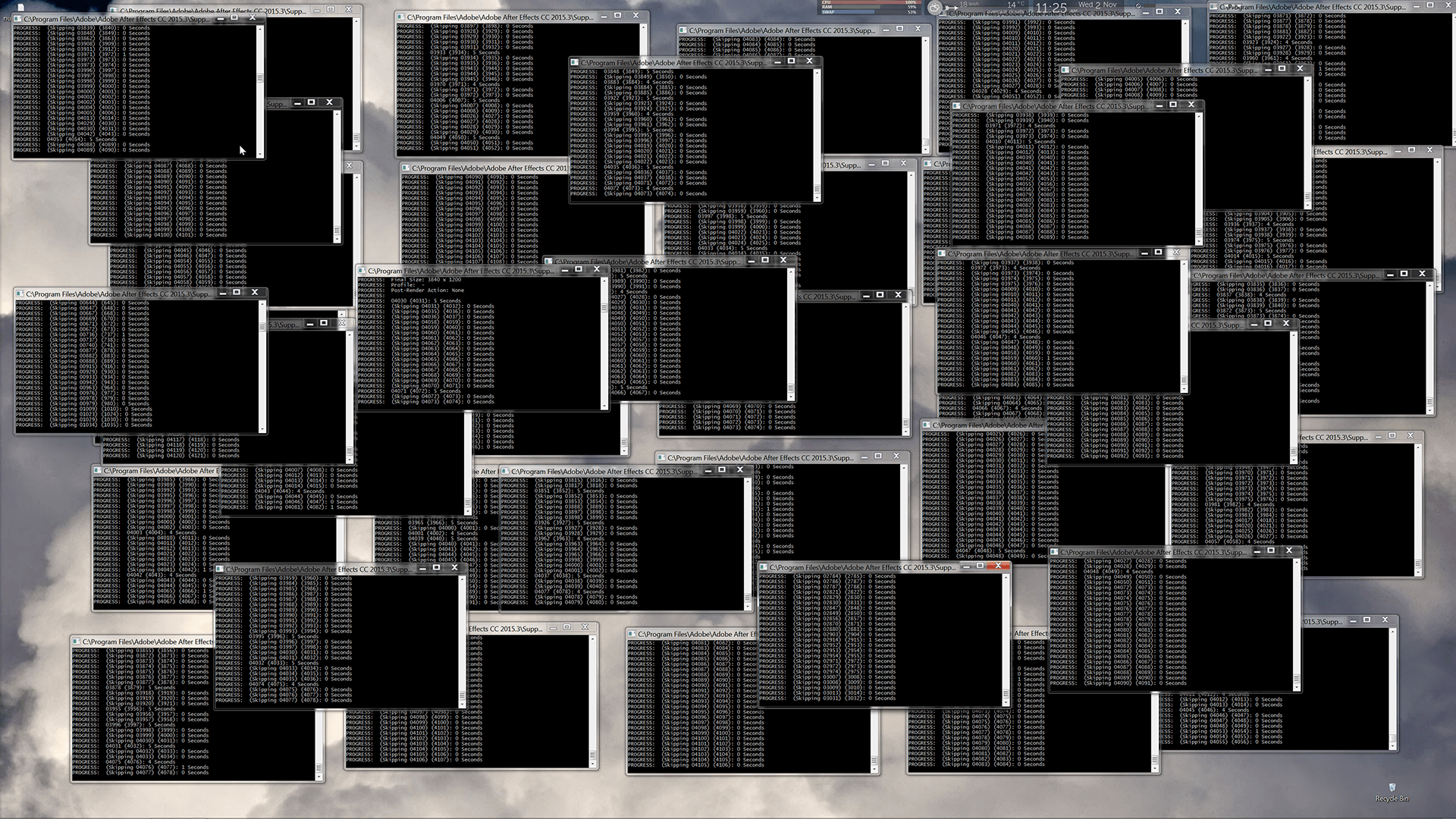 In that example the per-frame speed of each renderer barely decreased compared to a single instance, so I achieved a speed increase of roughly 4000%. YMMV, depending on how many cores and how much ram your machine has. I went to the effort because I had a project involving very long and and reasonably complex comps. The project would simply not have got done without this technique, or I would have had to farm it out to a commercial render farm.

Of course the speed-up comes at a price, which is a slight increase in complexity of your workflow. You need to set your comps to render as image sequences, and use the multi-machine settings so that each renderer will look for the next unrendered frame. At the end if you need a movie file you'll have to do a compression pass, but in my case I usually master to a png or tiff sequence, and then run off h.264 encoded copies for clients from the master.

The powershell command line I used in that scenario was:

This is executed in a powershell window (type in WindowsR and then type powershell.exe). This is a shell scripting language integrated into modern versions of Windows that can be used for all kinds of stuff.

Mac Using Bash version > 3 (default shell in current versions of OSX), or indeed with cooler shells like zsh, you can use this script:

If you have multiple comps you can render them as movies but start a new renderer for each one. If you invoke aerender.exe like this

it will render the third comp on the render queue. Putting it into a script you can do:

That will start a new aerender instance for each comp–once again, change the 12 to however many comps there are in the queue. Note that this technique can run into problems if you have lots of comps in your queue–if you use all your physical memory things will come to a shuddering halt pretty quick. To keep the number of instances down you have to check how many aerender processes are running and only start a new one when a running one finishes. A simpler workaround is to make as many copies of your project as you want there to be instances, with the render queue divided up between them, and then render them all concurrently. So render thread one would be rendering comps 1,2,3, render thread two would be doing 3,4,5, and so on.

While this question has already been answered; my recommendation:

Use AfterEffects for your rendering if you have a system with a high number of cores and a lot of RAM.

If you have to do simply a transcode of a file; or can use Bridge to import your PPro Project into AE (barring your edits will remain intact); the feature under Memory (Edit -> Preferences) allow for you to use Multi-threading.

If I am doing just a straight render; or something simple; I can use AE to allocate 32 of my 48 HT cores; additionally; I can allocate 3 GB of ram to each Thread; which is depending on what type of encode I'm doing, anywhere between 2-100x faster in terms of rendering even with my Dual Titan Black GPUs.

This of course; only applies if you have a LOT of cores; and a LOT of ram...

Premiere; rendering through AME; will be limited to using only 1 Thread unfortunately; and will rely on your GPU unless you have that disabled to use software rendering under Project Settings.

How to speed up Media Encoder to use 100% of your cpu? Here is an example: Create a file: settings.ini place inside of it

For a quad core / 4 threadded machine like mine, this made Media Encoder jump from 1 core to using 96% of all four. You must watch the youtube video "Render 300X FASTER | Premiere / After Effects / Media Encoder " I'm successfully using this with CC 2018 products.

Close After Effects while rendering with Media Encoder. By doing so my CPU usage went from 30% to 60%. I guess because Adobe isn't sparing CPU power for working simulatiously in AE.

Can I suggest this is still an issue 5 years on! You need to close all Adobe apps and then open Media Encoder (if that's where you're rendering from) FIRST, then it'll assign the full resources available to that app, I haven't seen it dynamically share resources, it simply allocates CPU-time according to the number of apps open when you start the Adobe app (this is repeatable, try opening LR for example before rendering, it'll only use 10% of the CPU - then open AME first then lightroom and you'll get 100%)

I got a 4x increase in render times because of this. Hope it helps. Adobe's "resource management" sucks.

Not the answer you're looking for? Browse other questions tagged encoding performance or ask your own question.