I need to recover some badly underexposed video. The video is virtually black with no detail at the moment.

I don't need it to be perfect but I would like some ideas on a process I could follow to recover some of the image. It will be OK if it's grainy and I don't really mind if the white balance is off.

If anyone could suggest a good program (free or trial) I could use and a process to recover something out of it then that would be fantastic.

The biggest problem you are facing is that a DSLR typically records to the H.264 codec. That codec tries to minimize the file size and the only way to achieve that is to throw out negligible information.
Sadly human eyes are not sensitive to black parts of video, so dark areas are highly compressed. That means you will have a really hard time brightening your footage, since most information is simply lost.

Had you had access to a RAW or lossless recording codec, you might have been able to recover a reasonable amount of your footage, but that would have cost much more storage space and meant more post production work.

If you would like to learn more about codecs, there is an in-depth explanation on Phillip Bloom's Blog.

You could use the 30 days trial version of Premiere Pro (most editing programs will be able to perform the following options).

The best way to make the video viewable depends on how badly the video is underexposed. If some areas are literally pitchblack, there is nothing you can do about it.

If that does not work, deactivate or delete the brightness and contrast effect and try adjusting the luminance curve. Try raising the curve, so that minimal differences between the shades of gray (lol) will be increased to make them visible. That way, the video won't look really good, but it might be viewable at least.

Try adjusting the luminance curve to something like this: 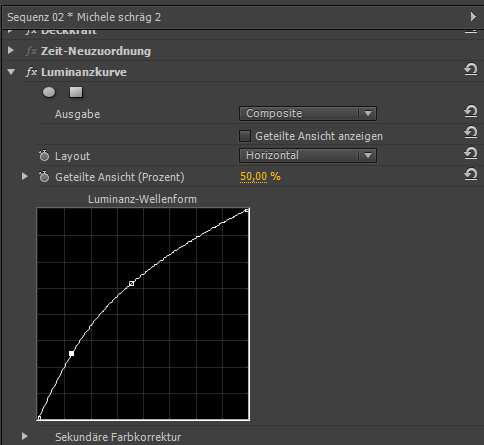 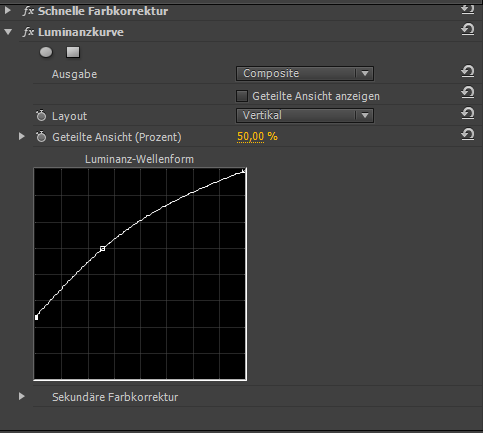 (Not really sure if the second one would work as intended in this case, but it's worth a shot)

If that still doesn't work, you could try playing around with RGB curves and color corrections. However, if you didn't see any improvement after performing those steps, I don't think you'll be able to perform these steps.

If one of the above steps works, you might be able to even get some color in it using RGB curves and/or increased saturation, but I'm not sure if this will do anything if your material is really that highly underexposed.

You are almost certainly up a creek with no paddle. Since video is less than 8 bit color, what you see when you watch it is what is there.

If there was some small amount of detail but it was just really dark, then you could alter the white point and get something minimally usable out of the darkest part of the image. This can be done with any decent video tool, including most free ones as it is basically just a brightness boost (make everything medium grey) crossed with a contrast boost (make the darker greys black and the lighter greys white.)

If, however, it is almost solid black like you said your video looks, then there is no (or very, very minimal) detail to expand out. There is no "hidden details" like you have in a 12 bit or 14 bit raw image that are hiding outside the visual range of the image. This is also why color correction on video footage is so much more of a challenge. It is also why the ability to shoot RAW video, which does capture 12 or 14 bit images for frames on cameras like the 5D Mark iii is such a big deal in the DSLR video world right now, because such functionality used to only be available on $30k+ cameras.

Like others have said, just load your video in anything and play with the brightness effects. Even a gamma curve could do the trick.

Or save a frame of the video where you can see anything at all, and play with that in a still-image program like imview, and play with the brightness / contrast / gamma to see if there's anything still there worth looking at.

Not the answer you're looking for? Browse other questions tagged video video-editor dslr or ask your own question.

3
What is a good workflow for producing High quality High definition Videos suitable for a final upload to the internet.
3
Timelapse video with meta information on every frame
5
How to make a video of an iPad (or other tablet) screen
2
How would you go about finding out when a digital video was made?
4
Recommended Encoding for VHS to Digital to be Followed by Post Processing
0
How to include proof of when a video was made, something that couldn't be be faked at a later date?
2
Is there an automated process to split a video into sections with motion?
4
How to automatically enrich a video stream with dynamic overlay (text, images, …)