Make video look like it was shot in a dark room

So I'm working on a video that I want to look a bit cooler. It was shot in a normally illuminated room (no special equipment, only normal light bulbs), it looks like this: 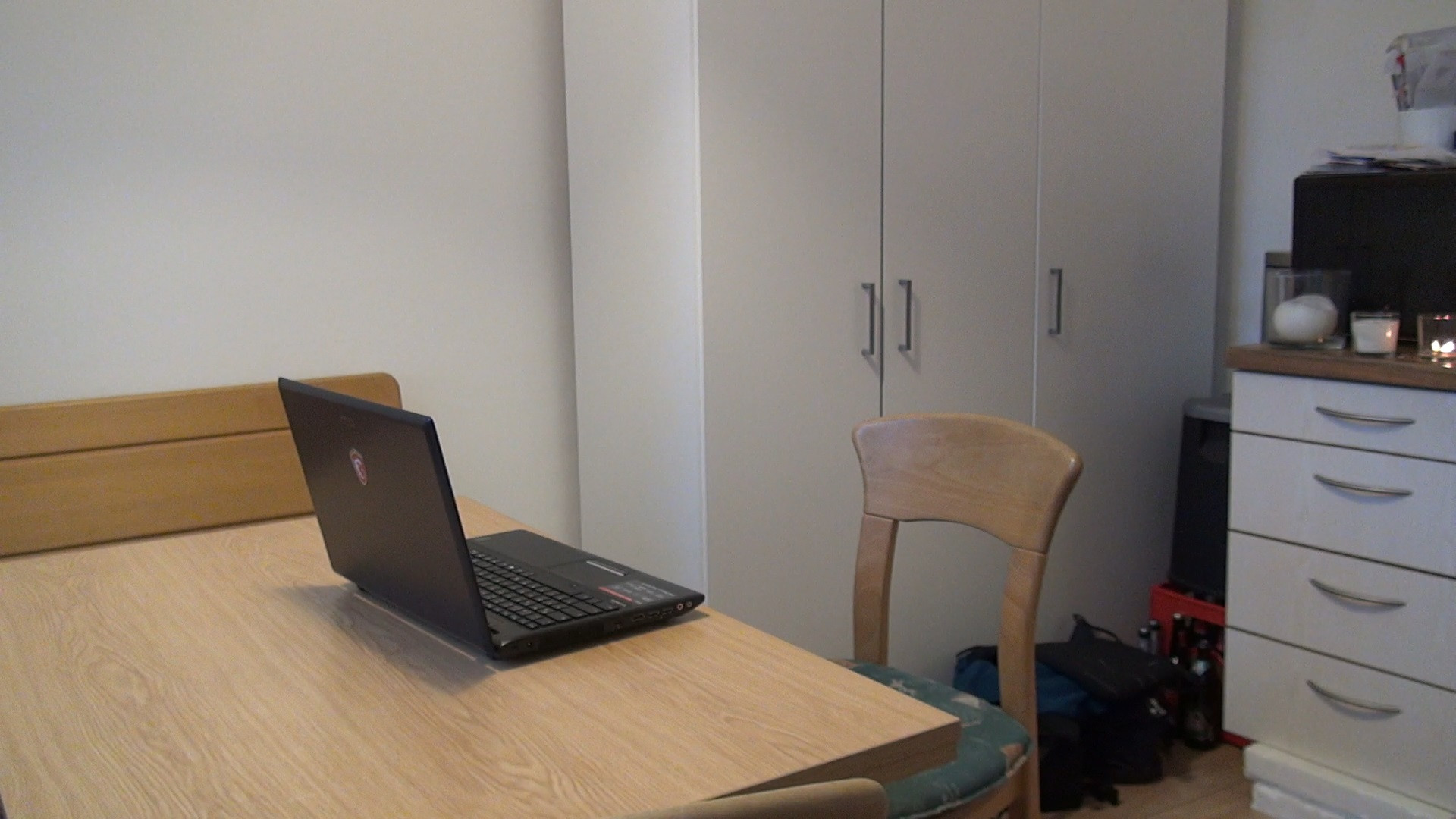 With a person sitting in front of the laptop. There are also over-the-shoulder shots with the laptop display being shown. So, I want to make the video a bit darker and surreal. It does not have to look like it was actually shot in the dark, it would even benefit from looking a bit unnatural and obviously edited. To be more specific, I want the person sitting in front of the laptop (as well as the laptop itself) to be clearly visible, whilst the table, the chair, and everything in the background gets darker and unobstrusive.

I'm using the current version of Premiere Pro. What is the best approach to get that kind of effect?

And please, no lecture on good preparation and such. The recording was done in a rush and the whole video is kind of a last-minute thing. It doesn't have to look perfect, I'm open for suggestions ...

You are lucky that you don't have extreme lighting conditions in your shot, also you're indoors. So it should definitely be possible to get the footage a bit darker looking without making it look weird. I can recommend working in After Effects rather than Premiere, its far more suited for advanced lighting correction.

I would start by masking the already dark areas of your footage and make them even darker. Try to create a more focused looking light that's coming from the light bulb/screen or whatever light source you want to have. If you want to create new light sources you will also have to make some masks to emulate the way the light would shine on the surrounding objects. The whole part behind the chair should be a lot darker. Generally make everything that is already in a shadowy area even darker and lower the brightness of the image overall to a point that feels good.

Also something that should help is this (bit dated) tutorial by Andrem Kramer. Its not perfect but definitely a good help to figure out the workflow: http://www.videocopilot.net/tutorial/day_to_night_conversion/

It's not that bad to convert from day to night if you just need to bring the overall levels down and you don't have any strong shadows or blown portions of the image.

Unfortunately however, you are trying to do something much more complicated than that. You need to actually alter not only the overall lighting of the scene, but make it seem like it had extra lighting on the area in front of the laptop that wasn't originally there.

This complicates things considerably. If it is a fixed shot and there is nobody in front of the light, then it might not be that bad, however, since you want the light to emit from the screen, you will need to make sure you track any motion of the screen in 3d (a tool like After Effects is probably best for this).

You then need to know the geometry of the scene around the laptop, including any actors. This is because a laptop screen isn't just going to make light, but it is also going to make shadows on anything that is in line with it. You need to be able to track these objects and update where the shadows should fall and try to simulate how the light should fall on them.

In short, this is a massively time consuming and technically challenging process to do correctly. Despite the fact you said not to lecture about good preparation, you are getting the lecture anyway. Handling lighting in post is a major pain in the butt. It interacts in complex ways that you can't replicate from a 2d image without major, extensive effort on a frame to frame basis.

If you are really in a jam, you can try just doing the motion tracking on the laptop and use a mask with faded edges to reduce the drop off in brightness of the shot to make an extremely primitive lighting effect, but the result is going to look more like a highlighter on your video than light coming from the laptop.

Not the answer you're looking for? Browse other questions tagged premiere editing lighting or ask your own question.