Advice on how to determine right camera equipment and set up for multi-sport court?

We are building a 65ft x 30ft multi-sport court with 13ft walls all around (similar to the one pictured) and we would like to know what video camera equipment would be the most appropriate in order to get a live feed of the action 24/7. 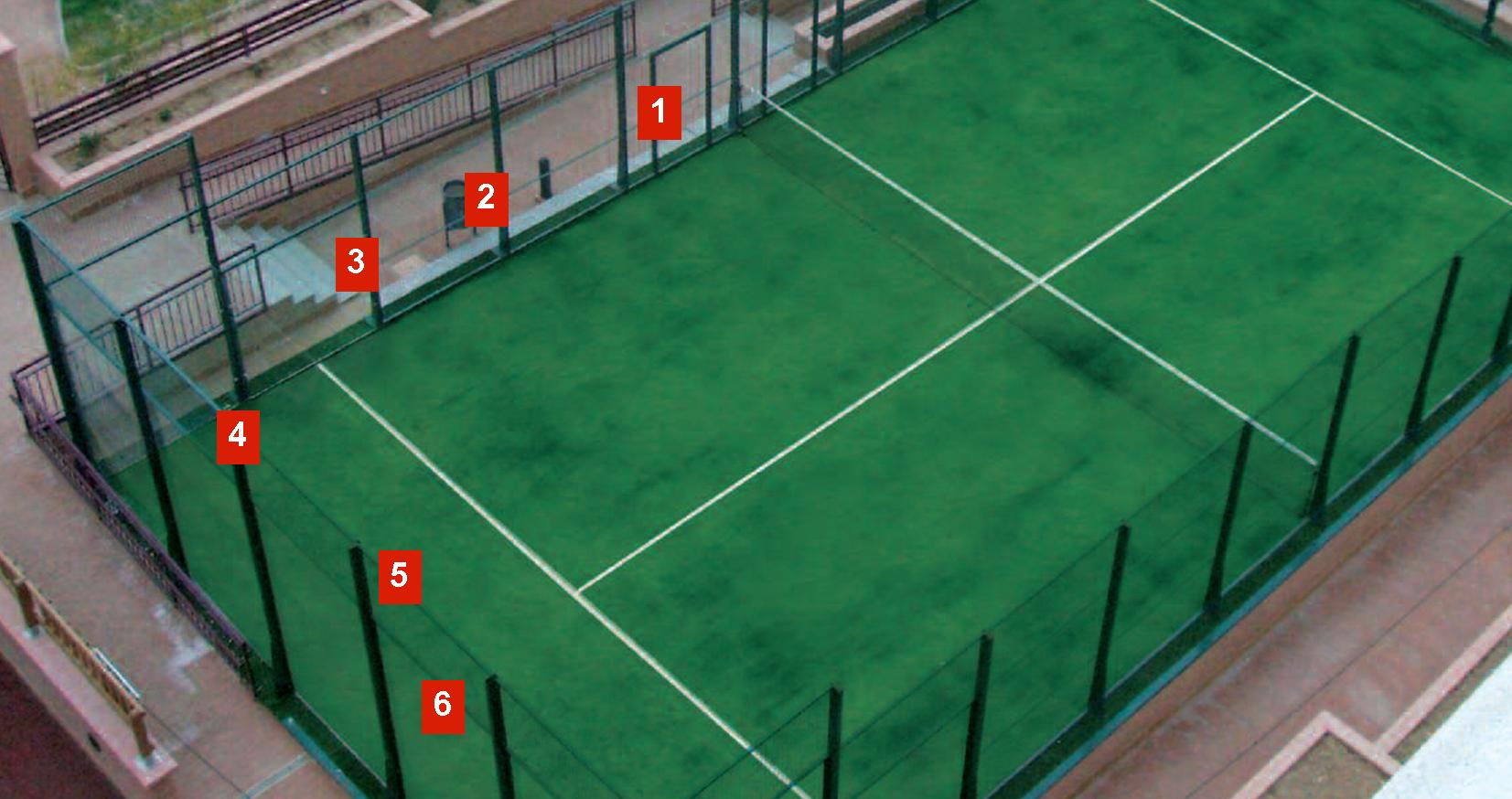 We would like the cameras to be up high, anywhere around or on top as needed. Fixed, unmanned. They also need to be able to withstand being hit by (tennis, basketballs, soccer balls, etc) and have HD quality of at least 720p. No need to be able to move it or zoom with it remotely.

According to my research, there are security cameras that could possible do the work, considering they can shoot HD, but would the video look smooth? Would fps be a limiting factor?

I understand we should be looking for HD-SDI (over HDMI) able equipment as it would allow us to run longer cables as needed, correct?

With all cameras in place, where would all feeds converge? Would it require a tricaster/studio board or could it go directly into a video card/laptop? Trying to keep it as simple and cost effective as possible.

The main purpose of the live feed is to show it in screens for spectators outside, with streaming as a second priority.

Lastly, is there any software that would allow me to plot or draw the vision field of a camera? Or anything remotely similar using geometric and physical data? Not even sure if those are the proper technical terms but hopefully you get what I mean.

Thank you very much.

The GoPro would be a perfect candidate for what you want. It's a so called "action camera" and is a very robust (water tight with case) wide-angle camera that can shoot in very high frame rates with HD resolution (even more at lower frame rates).

Also the camera has in-offical scripting capabilities which makes it very easy to set the camera up for un-manned opertation.

You will only need to get a DC battery pack adaptor because the GoPro cannot be used without a battery inserted. It's a dummy battery that connects the camera to a DC power supply.

The GoPro Hero3+ Black, their best model, is available for 400$ or a bit less depending on the shop. There is also the Silver Edition for 300$ which should be enough for what you need, it also has HDMI out and 1080p @ 60fps.

Regarding your question about Security Camera, most of them have a rather bad video quality (in comparison to film cameras) and usually low frame rates that aren't suitable for sport events. They are very specialized cameras that often directly record to files instead of giving you a live stream (atleast the cheaper ones).

The capturing on the other hand can get quite expensive, you can of course use a standard PC to capture a camera but you would one capture card per camera and capture cards that support 1080p @ 60 FPS are rather expensive in the 700-1500$ range. There is also specialized studio equipment for these kind of things that handle multiple inputs but that again is also very expensive and will cost your around 10.000-15.000$

I'd say with a GoPro in wide-angle mode about 2 cameras are enough to cover the whole court when you put them in opposite corners. 4 would probably offer nicer perspectives but that depends on your budget.

If you are on a really tight budget I recommend you opt for 30FPS, not as cool for sports but then again most users don't even have the bandwidth for 1080p@30FPS.

Then you can opt for the even cheaper GoPro White Edition and use a lot cheaper capture card like a BlackMagic DeckLink for 145$ in combination with a standard PC.

When it comes to setting up streaming servers that handle the capture from the PCs and stream it to the web I recommend you hire a professional developer, this is not an easy task at all and can give you a lot of headaches if you have no experience with that matter.

Alternatively you can opt for one these things, they are rather in-expensive and are more compact and would spare you the hassle of a complicated server setup. It automatically streams to streaming services like ustream or YouTube, or have your own website integrate the RTMP stream that it produces.

It would definitely be the cheapest solution, though 1080p @ 60FPS is not possible with this solution, when opting for this device I would go with the GoPro White Edition aswell.

Though 720p@60FPS is possible with this solution, so that might be good alternative if resolution isn't as important as frame rate to you. I'd probably recommend the 720p@60FPS option, its the overall cheapest and high frame rates always win over high resolution when it comes to sport (in my opinion).

Hope that helps you.

Instead of the Teradek unit, I would try the new Epiphan Pearl, which can stream and record to/from multiple sources.

Not the answer you're looking for? Browse other questions tagged video camera hdmi sdi setup or ask your own question.

0
Video Capturing Cards - What to Buy on the Cheap for HD Quality?
1
Canon XF100 live stream -- additional hardware needed
2
Camera features useful when recording a live high school basketball game?
2
Video Camera with Detachable Viewfinder and Remote Control
0
How to set up live audio feed (with lavalier mic)?
1
Live-stream HD camera to stream on one's own Wordpress website
1
How to decide where to place and what zoom to use for a camera
3
What is the minimum camera requirements to create professional quality videos?