MiniDV is using magnectic tape as storage and use the discrete cosine transformation compression technology. Does the use of magnectic digital tapes no more film? 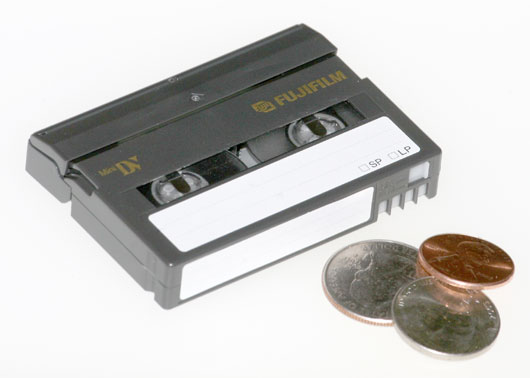 Magnetic media, regardless of being analog or digital, such as that used in MiniDV, Digital8, Hi-8 and even VHS tapes is not film. It is tape.

Similarly, modern cameras now often go direct to disk, using either memory cards, hard drives or in rare cases, optical media to record to, thus avoiding the need for tapes which require running it from beginning to end.

The term filming is still often used when capturing video with these latter formats, however it does not make them film. It just means that we reuse the common term even though the underlying technology has been replaced. Technically it is video.

To answer the headline question, specifically about the medium: No. Tape is not film. It may substitute for or be notionally equivalent to film in a more general sense.

But the body of your question makes it unclear exactly what you're asking. Could you edit it to make it more coherent?

Not the answer you're looking for? Browse other questions tagged video storage or ask your own question.

3
Converting SECAM VHS to a digital format
3
What's the difference between a DVCAM tape that is mini and a MiniDV tape?
2
solution for archiving digital video
0
Video capture device for senior citizen
5
Metal particle Hi8 tape degradation
2
How much disk space does 1 mini DV tape digitised in HDV take?
2
Converting from 3/4" video to digital.
2
Do talent show programmes film lots of footage or is it set up?
2
Software to manage digital assets
0
Film or digital for a hundred hours of footage? Looking at cost and durability