How do I temporarily disable Davinci Resolve nodes?

I'm new to Resolve (free version). As a programmer I kind of assumed that unconnected nodes, being unconnected, wouldn't interact with the process in any way. Apparently I was wrong.

What I'm trying to do here is find out an easy way to try out a completely different approach to grading the clip without losing the previous settings.

In the screenshot: 3 isolated nodes containing the previous grading and 1 new node for trying out alternative grading. Even though the new node has very visible adjustments, I only see the original clip in preview.

I also tried removing all the previous nodes. Only then the new node begins to work, and as soon as I add another node that is of course initially unconnected, the preview returns to the clip's default state.

⌘-D will disable the currently selected node. Resolve really doesn't like to have loose nodes floating around, so either disable them, or delete them. But since you're talking about creating a new, experimental node structure, what you really want to do is create a new local version. Right click on the clip thumbnail and select Local versions-> create new version. This basically creates a copy of your node structure that you can return to whenever you like. After issuing the command, you'll see that the name of the new version appears under the thumbnail to let you know which one you're working on. To revert to the original (or select from any number of alternate versions), right click the thumbnail again and choose versionName->Load. 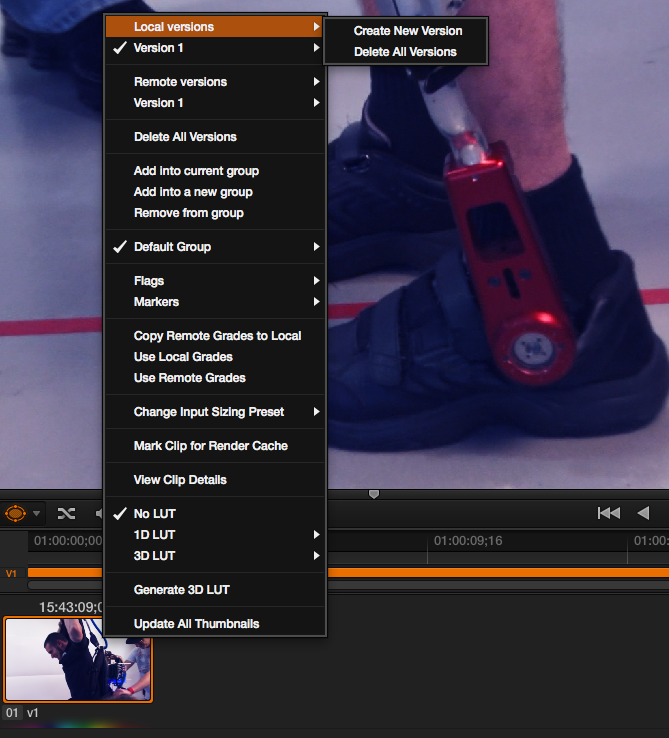 Not the answer you're looking for? Browse other questions tagged color-correction or ask your own question.

1
How does ARRI saturation formula differ from the ASC-CDL spec?
2
How to fix white balance gone bad?
5
FCPX => DaVinci Resolve => FCPX color grading round trip
4
How do I correctly use an ACES workflow with CinemaDNG footage in Davinci Resolve?
2
How to colorise black and white movies?
2
Dark Video/Gama Shift from Davinci Resolve to YouTube
2
Davinci Resolve 15 - color correction of whole tracks
1
How can I correct shadow/highlight with free software?