While watch a shot on YouTube at .25 normal speed, I noticed two distinct images of the rocket fired at the ship from (25-26s).

Is this an effect of the video, the film, or the result of a video that was filmed at regular speed with a regular camera and watching at .25 speed? My question is why is the missile visible in two different frames?

At a certain time you can see the rocket at two places at the same time. 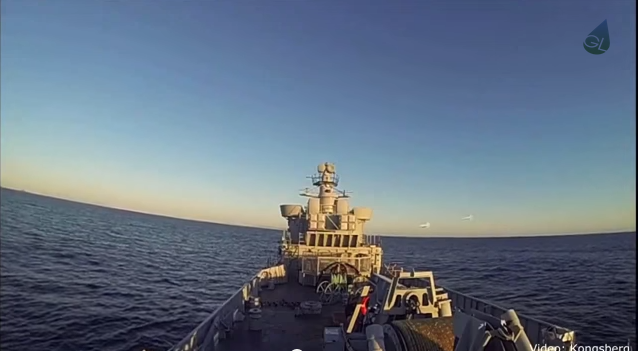 What you are seeing has nothing to do with compression artifacts, but is frame-blending due to the slow motion effect applied (in the video)

Let's say the video is recorded at 30 frames per second. You only have 30 'pictures' per second to capture the information. If you want to slow the video down (to be able to see the rocket more slowly) you could play these frames back at a lower speed, let's say 15fps. Each frame will be visible twice as long as when playing back at 30fps. (you could also duplicate all the frames, and play them back at 30fps to have the same effect). The footage will kind of look jittery when doing this, like it is stuttering to continue, which is not nice.

Instead of just adding copies of the already existing frames, extra frames are calculated in between. The easiest way is to just calculate the average between the frame before and the frame after. This way all your frames will have different visual content and it will be a little more pleasant to the eye. The fact that you are seeing two rockets, is due to this averaging.

There are other possibilities to generate new frames. Software like twixtor does some advanced calculations and will (try to) guess the rockets position on the frames in between. If configured correctly this is even more pleasant for the eye than the averaging method.

The obvious solution would be to shoot these kind of shots with a high framerate. If you shoot video at, let's say 1000 fps, you can slow it down to 30fps (33 times slower) without having to calculate values from in-between frames.

This type of problem is usually a side effect of the type of compression used. In order to minimise the bandwidth requirements, frames are simplified, reusing content from previous frames etc. And this can cause interesting video effects when key (whole) frames are corrupted or missed.

It could also be caused by interlaced source material, where half the image is recorded at a time. Fast-moving objects would be recorded in two different locations. When the interlaced signal is converted to progressive, the two fields are merged to create one frame with two rockets.
However, given that there don't appear to be other interlacing artifacts, I don't think that's what's happening here.

Not the answer you're looking for? Browse other questions tagged video framerate slowmotion or ask your own question.

4
Why is my video alternating between blurry and sharp?
5
Framerate wagon wheel effect
1
How to get a higher FPS without changing speed video through Adobe After Effects or Premiere Pro CC2014 letting the software create the missing images
0
How to get smooth motion when changing clip speed?
1
How can different deinterlacing algo make shots look more like movie or like video?
1
Does increasing the framerate while not changing the content affects compression quality?
1
Appear and disappear effect with camera movement
0
Good technique to superimpose face into moving character in AfterEffects?