Keying Out Smoke Against a Black Background

I originally tried Remove Matte but that didn't seem to have any effect on the smoke video. I then tried Color Key and I was left with what you see below. (Original smoke is on left, the "keyed" version is on the right.)

I am using Adobe Premier Pro CC (v7.2.1). What is the best way to cleanly remove the black background while leaving the smoke. The goal is to have the smoke over the background video.

I am a novice at this so please use clear instructions. If an option is buried in a menu, please tell me which menu. What I have tried has come directly from the Premier's Effects Panel.

In Premiere, you can use the Set Matte effect to set a track as a luminance matte. In the case of the sample of smoke from mmphilips post, the luminance was a bit low so I put it in a separate sequence and used curves to boost the overall luminance. I then placed the matte on Video 3 and made it invisible. I then placed the Set Matte effect on Video 2, pointed it at Video 3 and specified that it should use Video 3 as the matte. 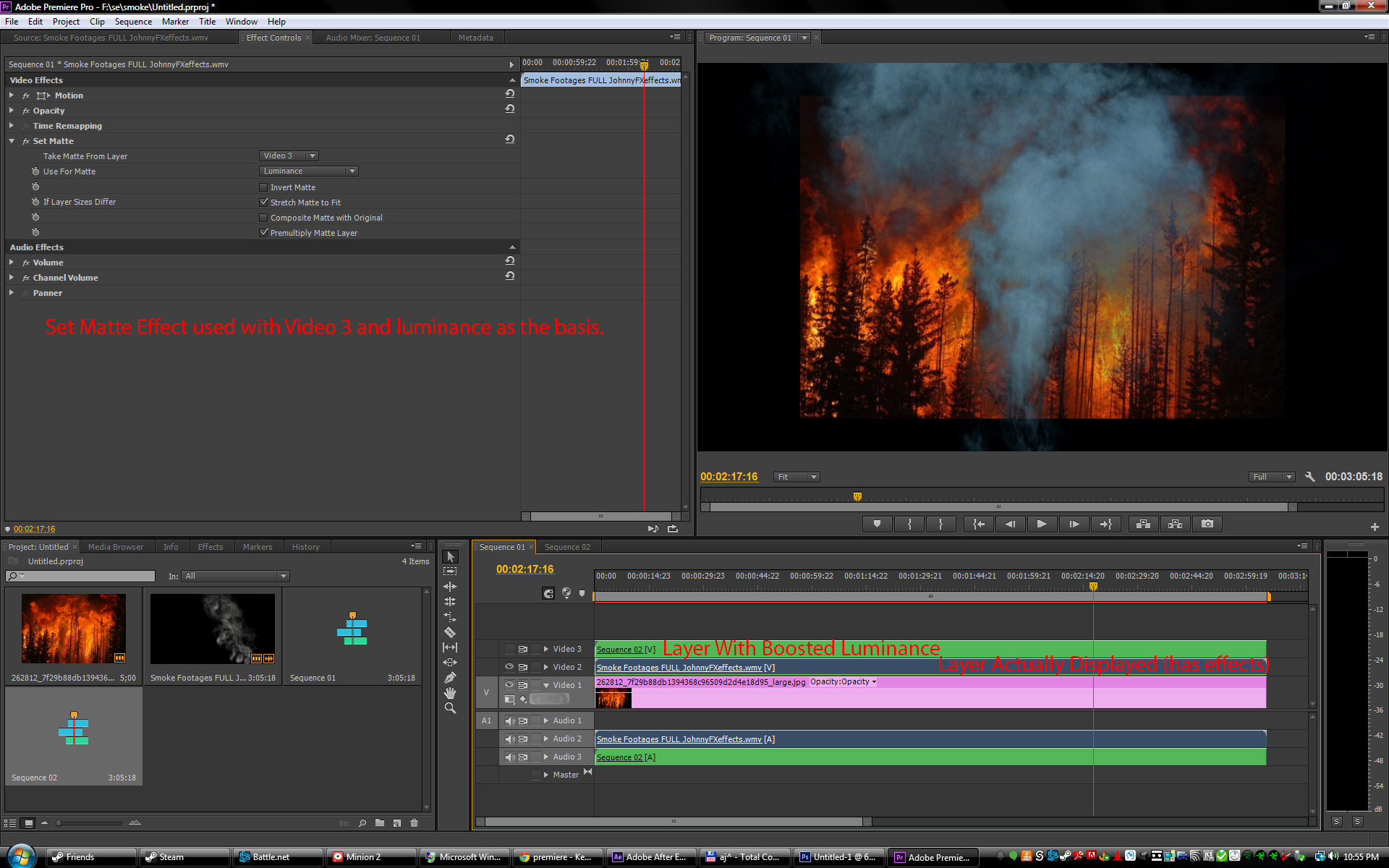 The same thing can be accomplished in After Effects in a similar manner. Again two copies are placed on the composition and the top most is made invisible. The modes option toggles is clicked to bring up the proper controls and luminance is chosen for the second layer so that the third layer is used as a matte. As shown, I applied curves to the third layer directly to make it blend more naturally. Note that in this screen shot I actually inverted the matte layer and thus used inverted luminance, but those steps aren't necessary, I just made an error while getting it working and didn't bother to correct it. 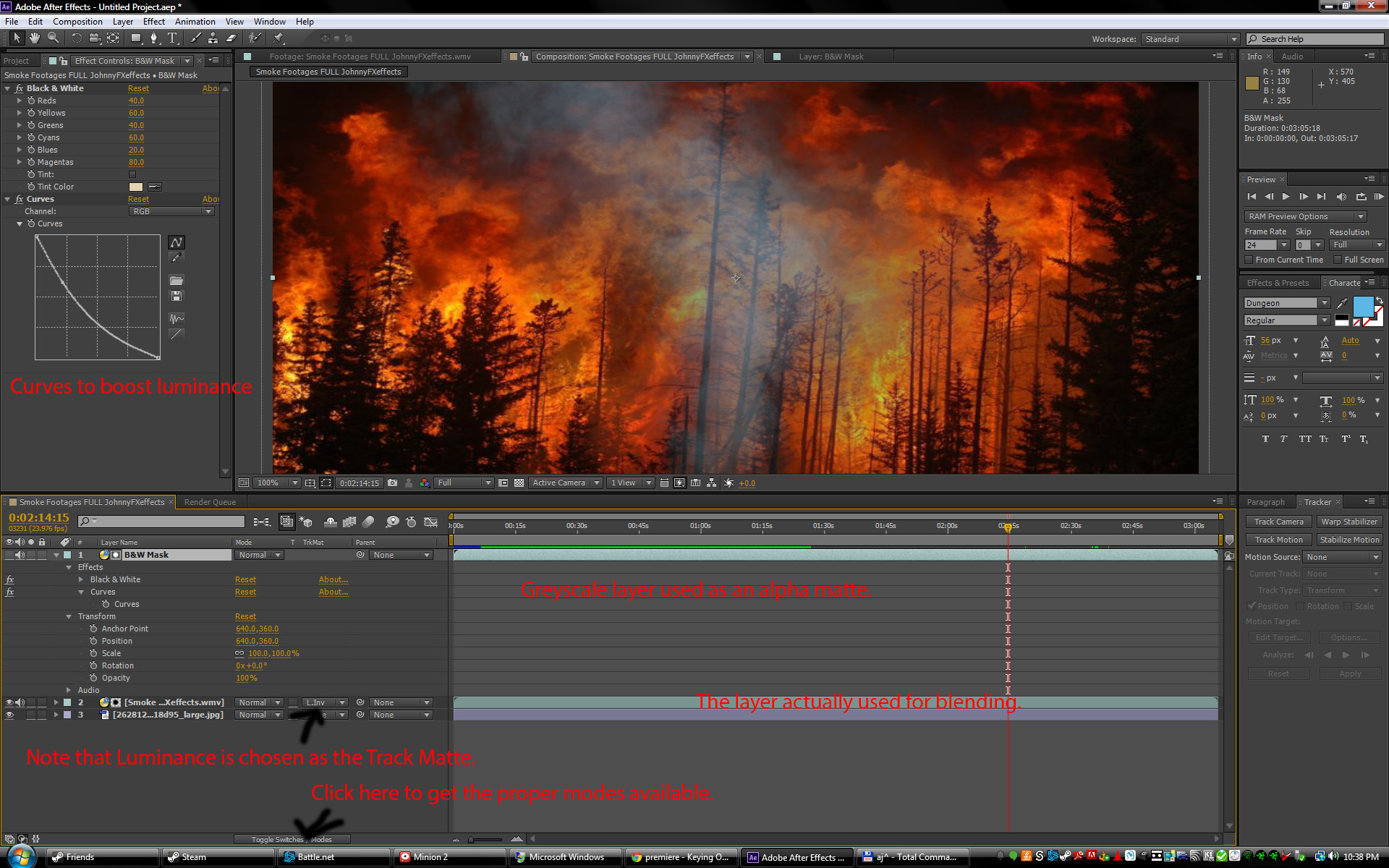 Note how this results in much smoother results than a luminance key or chroma key since a luma or chroma key makes a hard cut off and is not able to do alpha blending based on the intensity of the smoke. Smoke however is somewhat transparent and you want to be able to see through it where it is darker. That's why this blending technique works.

First off, you would normally use After Effects for special effects such as Chroma Keying. That being said, Premiere Pro is capable of chroma keying quite decently. Here's an example using free smoke effects by JohnnyFXEffects.

Set up your scene as you usually would, and then go to the 'Effects' tab. (1) From the 'Keying' folder, select the 'Chroma Key' option. (2) Simply drag and drop it onto your smoke video file. (3)

Next, select your smoke clip by clicking it, and go to the 'Effect Controls' tab in the upper left workspace. (1) Expand 'Chroma Key' (2) and click the eyedropper icon in the same column as "Color". (3) Next, select the color you want to chroma key away by clicking in an area of your video with that color. (4)

Keep fiddling with your Chroma Keying settings untill you get the desired result. I found that setting similarity to around 7,5% (1) and Cutoff to around 50,0% (2) gave me a decent result.

Optionally add a few more video effects untill you get the desired result.

The simplest way would be to set the blending mode of the smoke clip to "screen". You'll find this setting in the "Effect Controls" panel under Opacity.
Screen basically ignores black. A better description is found on Adobe's site: http://helpx.adobe.com/en/photoshop/using/blending-modes.html

Not the answer you're looking for? Browse other questions tagged premiere chromakey or ask your own question.

4
How can I accurately immitate this Picasa filter with Premiere's color correction filters?
2
Masking out the video background in Sony Vegas
2
Remove Greenscreen Reflections?
1
Adobe Premiere CS5 match sequence settings but change codec
0
How can you get clips from different YouTube videos to have the same resolution or frame size in Adobe Premier Pro CS6 2017?
1
Adobe Premiere: PNG transparency ist not interpreted correctly
0
What are some Best Camera Settings for Recording for Chroma Keying and which color of cloth reflects least green color?
3
Greenscreen recommendations