How did cameramen manually focus in the film days?

In the days before LCDs and digital cameras, manually focusing an interchangeable lens still camera wasn't a whole lot different than it is today. In most designs, you had a mirror that gave the photographer a through-the-lens view, allowing them to accurately focus. When the shutter button was pressed, the mirror flipped out of the way, exposing the film.

However, this method is obviously not usable for the continuous focusing required by video camera operators. Modern cameras solve this problem by using Live View. How was this problem solved in the film days?

There are two main ways this was solved:

When using this method, the focus puller measures the distances at every point during the shot, and then pulls focus to these marks, at times making adjustments when an actor or grip misses their mark.

This still occurs today, however is becoming less prevalent due to the filmmaking styles being used (handheld, where the same marks are not hit each time).

Using one of several methods, including half-silvered mirrors, CCD sensors behind the film negative, and telecine transfers, a video split is made. On modern productions shooting on film, this split is what is sent to 'Video Village', where the director sits.

Telecine Transfer (Not the correct term)

I've never really understood how it worked, until now, so I present this lovely diagram from Wikipedia: 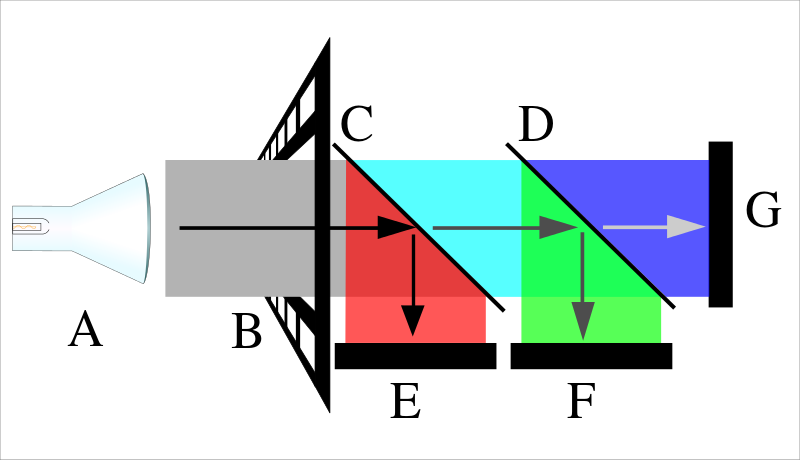 In essence, the light shines in and exposes the negative. After that, it passes through a series of half-silvered mirrors, each time being split into separate light components and recorded onto an imaging chip. These are them combined, and displayed in the viewfinder, or as a video-out.

One side effect of this method, is the mechanical shutter is visible, as a black screen lasting 1/50th of a second, 25 times a second (whenever the negative itself is not exposed).

Common throughout the 1950s and 60s, having a parallel sight (separate lens, like what you had on a cheap film point-and-shoot camera) allowed the operator to see approximately what was being exposed onto the negative.

As mentioned in the comment, a very cheap way of getting an image to a viewfinder was to simply use a half-silvered mirror, somewhere between the lens and the negative. In this way, half the light transmitted through the lens exposes the negative, and half is seen through the operator's viewfinder.

This method does not allow for multiple viewfinders, monitors, or screens, unless another split is created.

Good quality film cameras have a reflex viewfinder system, where "reflex" means that you're viewing through the lens, and thus you can judge focus by eye.

To achieve this There are, er were, two basic strategies:

As you can see, both methods allowed the operator to see through the lens while filming, allowing for on-the-fly focusing. Video splits also allowed a live video feed to be set up, meaning the focus puller (and director etc.) could have a monitor, but this was relatively late in the piece. A video split is basically a video camera bolted on to where the eyepiece goes, or sometimes with a separate beam-splitter. Until video splits came along the focus puller checked the focus points in the rehearsal, made marks on the floor with camera tape, consulted their cinematographer's manual for the depth-of-field charts, and eyeballed it.

You'n whippersnappers don't know how easy you gots it. Now get off my lawn!

Not the answer you're looking for? Browse other questions tagged camera focus or ask your own question.

2
How to focus when recording video using a DSLR?
1
What is the significance of this "RED, Digital, and Film Format Size Chart"?
0
Wireless focus for the Ronin-M
2
How do I get a 1960s film look, like technicolor?
6
How does shutter speed affect the video?
1
How does an optical viewfinder on a film camera work?
0
How do I prevent the auto-focus from bouncing on my Galaxy J7 smartphone?