Getting audio from a Bell & Howell Filmosound 8 Projector

I recently acquired a Bell & Howell Filmosound 8mm Projector, and several 8mm Sound Films. To my delight, the motor and lamp work and the unit seems to work quite well.

I would love to figure out how to capture/play the sound from the sound films, but the unit is designed to connect to something else, presumably a preamp or stereo system of some sort.

Originally, this unit came with a special cable to connect to the atypical audio ports on the projector, but I don't have it. Both ports are un-labled. One appears to be an 1/8" headphone type jack, and the other is smaller. I have tried connecting the 1/8" jack to a number of preamps/mixers, but have not been able to get any audio. This leads me to believe the 1/8" jack may be for recording sound to a film, and the smaller one is for playback.

Has anyone used this or a similar model and been able to get sound? Any help appreciated: 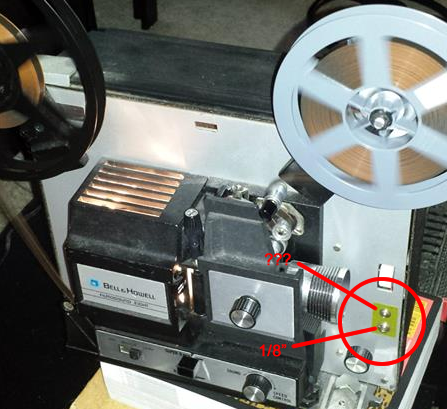 The projector you have is for use with the Bell and Howell model 450 cassette recorder. This projector has no optical or magnetic means of playing or recording sound. IN this system, which is a "Double Sound System", the sound is recorded on the 450 player/recorder via a special cable that goes between the camera and the recorder. The film itself has no magnetic or optical sound track on it. The recorder records both the audio from a microphone and sync information from the camera, hence the special cable running between camera and recorder. After the film is processed and returned, it threaded into the projector and then the cassette player/recorder is connected by means of another special cable to the projector, via the 2 jacks pointed out in your photo. The jack questioned is a size 3/32. This special cable is used to deliver sync information that was originally recorded on the tape to the projector for lip sync sound reproduction

the previous post is essentially correct as I've used this filmosound8 system a lot in the past. do you have the original recorded cassette tapes, they're about 5 minutes long, to go with the 50 ft. length of a super 8 film. they contain the sound on one track and a (unheard) synch pulse on another, which when played properly governs that projector speed for synchronization. you have to know which cassette tape goes with which 50 ft roll of film, if there're more than one. the B&H 450 (or 450A) portable cassette recorder/player is fairly easy to come across on eBay, it uses 5 'C' batteries (or an AC adapter), and so is the special recorder-to-projector synch cable. many valuable sound home movies were made this way but unfortunately modern reproduction is practically non-existent because people are unaware of this particular equipment

perhaps though your original question hasn't been answered directly enough. about the 2 jacks on the projector - THEY DO NOT CARRY AUDIO SOUNDTRACK. They carry synchronization pulses from the special B&H 450 cassette recorder only (for playback of that cassette tape, no recording). Trying to 'hear' anything out of them so would be pointless

In addition to my previous answer 8/5/14, I would like to add that the stop signal that stops the tape player between "TAKES" is generated from within the 450 player/ recorder. This signal is automatically recorded on the tape every time the camera activation switch is released after each take. F.Y.I. this signal is 1.6 KHZ. I do have tech info for anybody who might be interested in this old sync/sound system.